There are reports of big celebrations in California. They have heard that Basil – the Crowman or Kaputu-kaak – Rajapaksa has decided to retain his US citizenship, and come there for a holiday. His wife had already left for a big family celebration.Retaining US citizenship, especially when one’s home country, Sri Lanka, is going through its hardest time that anyone can remember, is certainly a cause for great pride and joy to SL-Americans. There are bound to be celebrations in California, like what took place in Washington DC when the pro-Trump people took to the streets, broke into the capitol and made the biggest threat to democracy. 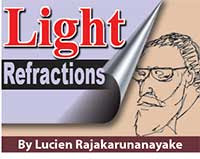 The mood of the California supporters of the Kaputu-kaak thinking is certainly what the Rajapaksas of the now fading Rajavasala want to keep alive. It is the thinking that has made Basil’s brother, Gotabaya, say, with so much pride, that he has failed in his task of presidency, but cannot resign. He is a leader who must continue in a failed office till the end of one’s term, and be supported and propped up by an unelected Prime Minister of a hugely threatened democracy.

The young Aragalaya protesters, who decided to make a protest about the Kaputa and other Rajapaksas, at the US Embassy, in Colombo, must surely know that the political system in the US could be even more corrupt than the Rajapaksa system in Sri Lanka, with the continuing record of shootouts at schools, killing so many children and teachers, and strongly against gun control.Let’s move away from the Kaputu American trends to the throbbing realities in this Paradise Isle. This week we saw a Ranatunga – a name that is famous from a great cricketer – have an Aprasanna decision in a court of law. He was found guilty of a crime that called for two years of imprisonment, a fine of Rs. 25 million, with failure to pay it having nine months more of imprisonment, and payment of RS 1 million to his accuser, and failure to pay leading to three months more in prison. His two-year imprisonment sentence was suspended for five years!

The dirty trend of democracy in Sri Lanka was seen when Minister Prasanna Ranatunga walked into the Chamber of the Parliament, and sat with the Prime Minister and other ministers. He was really enjoying the suspended sentence of imprisonment, and making mockery of the legal system in this country.Just remember that he is not alone in this derision of democracy. Premalal Jayasekara, of the SLPP, sentenced to death on a charge of murder, also remained in the House, awaiting an appeal. There is also the record of Karuna Amman, the former LTTE terror activist, who was an MP in Parliament and the Minister of National Integration, too.

It is the stuff of Pohottuva politics and governance that enables this mockery of the democratic process, to suit its own supporters. It is a display of how the Pohottuva thinkers in politics and governance have such ridicule and contempt for the Court of Law and the very principles of Justice.Persons who have clearly committed crimes and have been found guilty by the Courts under the legal system, are so well honoured in Parliament, the Temple of Democracy. But it is certainly not so for an elected MP, who hasn’t committed a crime, but is guilty of Contempt of Court – Ranjan Ramanayake. That is certainly the ridicule of democracy in Sri Lanka.

The politicians of Sri Lanka are reportedly having a big debate about the 21st Amendment to the Constitution. This is what made Kaputa to make a quick holiday in the US, retaining his dual citizenship. But, the people and voters of Sri Lanka must certainly think of much more than the mockery of dual citizenship. The very system of democracy has been largely destroyed by the 20A, that removed the 19A, and gave the Rajavasala Gotabaya all the power he has and needs for the current ridicule of democracy.

The need today is to think far beyond the 21A and come out with major changes to the system of democracy, moving away from all the threats, faults and mockeries that have taken place from 1970 and 1978 – under both Sirimavo and JRJ. Let Basil have his celebrations in the US. But we must stop the Parliamentary Privileges that corrupt and criminal politicians, found guilty by the courts, can enjoy with such contempt to the process of Democracy.

Disclaimer: Let crime have no respect in Parliament - Views expressed by writers in this section are their own and do not necessarily reflect Latheefarook.com point-of-view