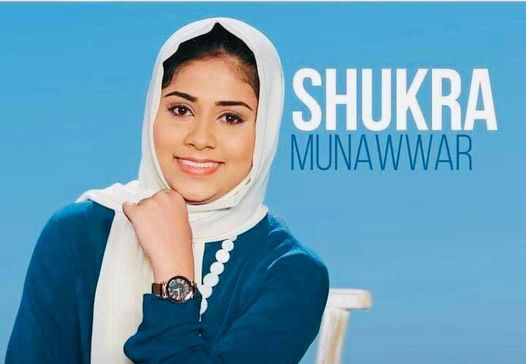 When Shukra Munawwar excelled in the Sri Lankan version of “Who Wants to be a Millionaire’ on a local TV channel, the 17 year old schoolgirl from the South of Sri Lanka, brought all Sri Lankans together in one joyous celebration.

It was not just her sincerity, her candid and cheerful demeanor that captured the hearts across religious and ethnic divides.

It was her story, her talent, her skill and her determination.

Shukra, beautifully clad in a head scarf and exceptionally knowledgeable in her answers, was not just another Muslim girl – she was a Sri Lankan young woman, who epitomized the hopes and dreams of her generation.

In a nation that has been more than divided – deeply wounded in fact – following the brutal Easter Sunday massacre in churches and hotels that saw over 300 dead and countless wounded, many still in deep trauma and recovery, Shukra was the healing balm we all needed.

The recent controversy over the cremation of COVID-19 victims had only widened the level of tensions.

But none of it was visible, when post after post on social media, shared by jubilant people of all ethnicities and religions, celebrated Shukra and her exceptional skills and talent tested on the screen.

There are lessons for us all here.

The courageous young woman up on the stage, telling her story of how she came to take part in the ‘Who Wants to Be a Millionaire” style contest on Sirasa TV, bubbled over with enthusiasm and hope.

She may have been from a less than affluent background but she was richer than many who boast of wealth, could be.

She was richer in her values, in her attitude and outlook in life and her unstoppable hope of a better tomorrow.

She came to take part in the show, she said, because she needed to buy a laptop computer to continue her studies online.

Her mother, who accompanied her to the show, couldn’t afford to buy one for her – her father was too sick to work and was bedridden. But she was determined to rise above it all.

In one single sentence, watched by thousands, this cheerful young woman was able to highlight the plight of hundreds of children who cannot afford the resources needed to pursue a holistic online study experience in Sri Lanka.

Her story was sad but she didn’t cry sharing it.

Instead, she chose to say what needed to be heard – that stories like hers should only serve to make one stronger, enabling one to reach heights of doing the impossible.

Never give up, she said. Until you have reached your goal.

I am here, she said, because I know the difficulties children doing online classes face in economically challenged families.

Respect your parents, she said, especially when they cannot afford to buy you what you want.

Give us all an equal stage to show our talents, she said, no matter where we come from.

At a time when average youngsters of her age spend the majority of their time either constantly engaged with a device or playing games, often choosing the solitary confinement of their rooms, Shukra gave us all hope that among them are young women and men like her, who still find the time and the ability to acquire knowledge that matters.

Someday, I want to be the CEO of a well known organization, said this cheerful young woman with the candor that the young could muster, her eyes sparkling.

Shukra has a powerful message for us all – she refused to curse the darkness – instead, she chose to light a candle and let the light cast its glow upon herself and the others.

May we meet more and more young people the calibre of Shukra.

Disclaimer: One young girl who united all Sri Lankans..and she wears a head scarf.. By nayomini nayomini - Views expressed by writers in this section are their own and do not necessarily reflect Latheefarook.com point-of-view