Skip to content
FEATURE ARTICLES SRI LANKA
Spread the love
Parliamentarian Dr. Wijeyadasa Rajapakshe says that he is yet to get a reply to the letter sent to the President’s Secretary seeking an explanation in regard to the donation of
USD 5 million given by the World Muslim League to provide assistance to families affected by the Easter Sunday attacks.
In a letter to the President’s Secretary on November 27, the former Justice Minister stated that it was necessary to find out what had happened to the funds donated by the World Muslim League that was given to compensate the Easter attack victims.
He said that copies of the letter were also sent to the President, the Prime Minister and Cardinal Malcom Ranjith.
Rajapakshe noted that the donation was handed over to the then President Maithripala Sirisena by the Secretary General of the World Muslim League, Dr. Sheikh Mohamed Bin Abdulkarim Al-Issa, at the end of the National Conference on Peace, Harmony and Coexistence held at the Nelum Pokuna Theatre. He pointed out that the then Opposition Leader and current Prime Minister Mahinda Rajapaksa and former President Chandrika Bandaranaike Kumaratunga were also in attendance. 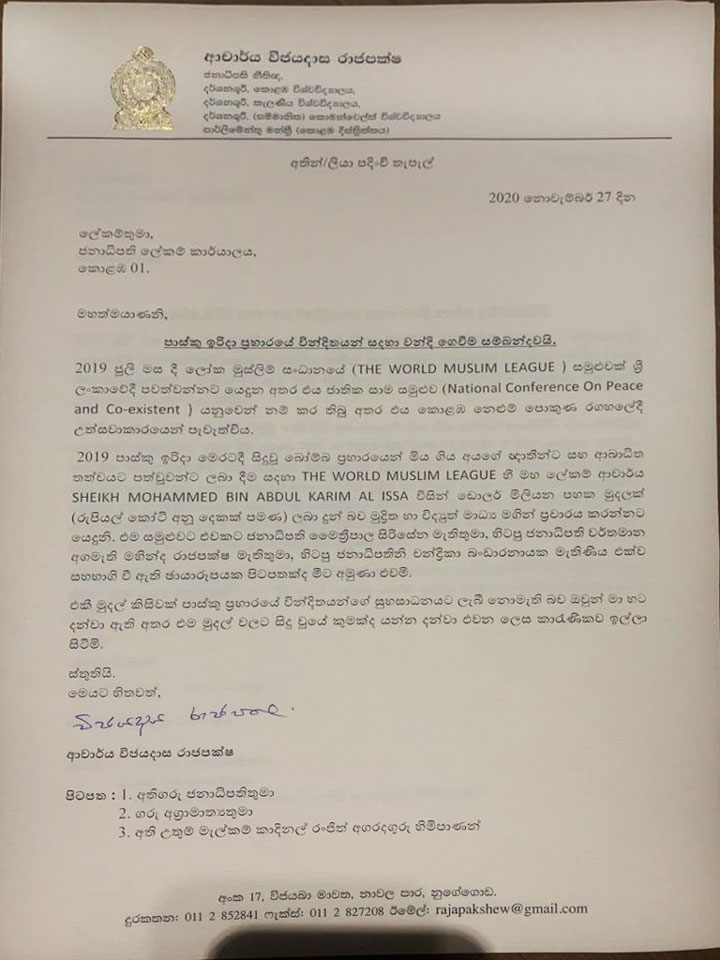 Disclaimer: President's Secretary silent regarding USD 5 million donation received to assist Easter attack victims - Wijeydasa Rajapakshe - Views expressed by writers in this section are their own and do not necessarily reflect Latheefarook.com point-of-view