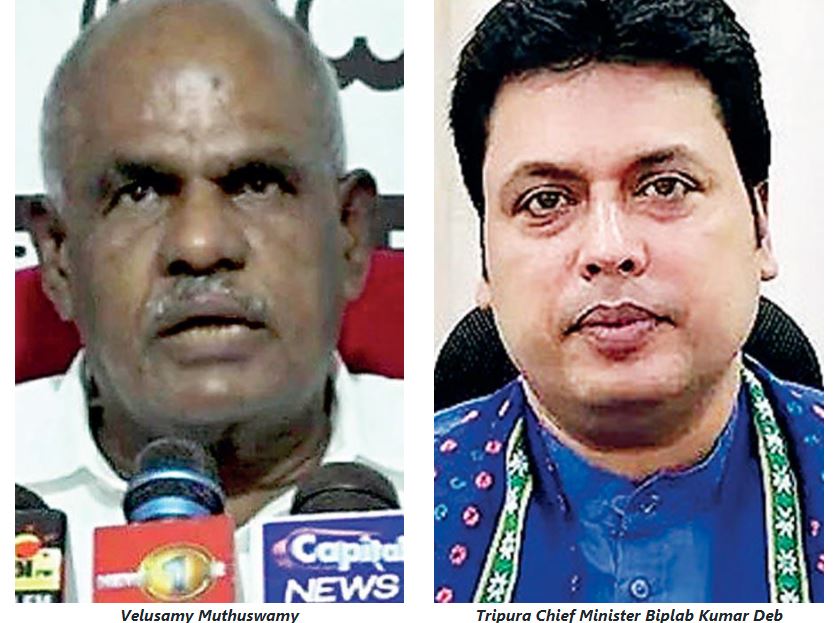 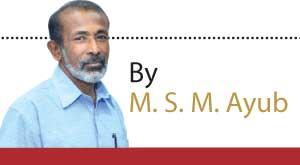 “Muthusamy says he admires PM and BJP leader Narendra Modi and said that his schemes are progressive, and they are achieving great results.”

Nevertheless, Indian leaders in an effort to do damage control, seems to have persuaded Biplab Kumar Deb to put the lid on the controversy by saying that Amit Shah had made the remark only jokingly.  Yet, the timing of the announcement of the formation of the party might have caused more concern among the Sri Lankan politicians.
However, to the utter dismay of the rabble-rousers in Sri Lanka, Muthuswamy denied any kind of links to India’s Bharatiya Janata Party. But he said that he admires PM and BJP leader Narendra Modi and said that his schemes are progressive, and they are achieving great results. In a conciliatory tone Muthuswamy told the Jaffna media that the objective of the party would be to work with the government in developing the standards of education and sports activities of the Tamil community.

Releasing the party’s manifesto he said that his party will be a trans-ethnic and trans-religious party and would be open to all ethnic and religious groups. It will work for the welfare of the downtrodden in all communities. A radio journalist, M. Indrajith serves as the party’s General Secretary and V. Dilan, a businessman, is its Treasurer.
A political party with direct or indirect affiliation to a major Indian political party would naturally be a concern among Sri Lankans, especially the Sinhalese and viewed with suspicion, for two reasons. Firstly it indicates the foreign influence on the country’s politics and thereby on the lives of the people. And secondly, meddling in Sri Lanka’s politics particularly by India has historically been viewed as a serious threat.

Four years later, in 1939, the LSSP split on two major theoretical lines of the then Communist movement paving the way for the founding of the United Socialist Party (USP) by Dr. S. A. Wickramasinghe, Pieter Keunemen, M. G. Mendis, and A. Vaithialingam. The USP became the Communist Party of Ceylon in 1943. Communist Party led by Dr. S.A. Wickramasinghe followed the theoretical line of the official leadership of the then Union of Soviet Socialist Republics (USSR) while the LSSP was linked to Leon Trotsky’s fourth International, a faction of the then communist movement in the world. Hence both parties were affiliates of transnational political parties.

Amidst concerns over the threats on the survival of the Indian migrant workers in the Sri Lankan plantations, against the backdrop of a global economic recession, Jawaharlal Nehru visited Sri Lanka in 1939 and was instrumental to the formation of the Ceylon Indian Congress (CIC), uniting various groups among the plantation community.  Later the CIC evolved into the Ceylon Workers Congress (CWC). Although CIC or the CWC did not officially have links with the Indian National Congress, it is a well-known fact that the politicians of the plantation areas have been very close to the India and Tamil Nadu. During a visit to Sri Lanka in 2007, Indian Prime Minister Modi also visited Norwood in the Nuwara Eliya District and told the plantation community “your roots are in India.”

The concern over the Indian meddling in Sri Lankan politics and specifically forming political parties in the country is not unfounded. Sri Lankans have always been looking at India with suspicion. There are reports that Sri Lanka was invaded as much as 17 times by South Indian invaders since 230 BC. The moving of the kingdom of ancient Sri Lanka from North Central Province to southwards is also attributed to the Indian invasions. Also there are stories of these invaders ransacking and plundering Anuradhapura and Polonnaruwa kingdoms and subjecting people to untold atrocities.

The Indian intervention in the Sri Lanka’s civil war since early 1980s including the violation of Sri Lankan waters and the airspace by the Indian military and the imposition of the Indo-Sri Lanka Accord on Sri Lanka in 1987 still remains fresh in people’s memory.

The Tripura Chief Minister’s statement and the formation of the Sri Lanka Bharatiya Janatha Party come amidst controversies between India and Sri Lanka over several issues. Sri Lanka had on February 1 unilaterally withdrawn from the Tripartite Memorandum of Cooperation (MoC) signed in May 2019 with Japan and India to jointly develop the East Container Terminal of the Colombo harbour which had irked India.  Also India has protested against a decision by the Sri Lankan government to hand over three power projects to China on three islands – Delft, Analaithivu and Nainathivu – in the Palk Strait, close to the Indian coast. Besides, India has been expressing concerns over the growing Chinese influence in Sri Lanka.

Therefore, it is justifiable if one concluded that Tripura Chief Minister’s statement was not inadvertent or a joke as he later said. However, another could also argue that India has other avenues such as the Sri Lanka’s ethnic issue to tame the Sri Lankan government, without forming new political parties. It was India that gave the confidence to the Sri Lankan Tamil armed groups by providing them with arms, training and funds for their separatist struggle in early 1980s. It can use the provisions of the Indo- Sri Lanka Accord as well, if necessity arises. In fact India has been using it. The Sri Lanka’s human rights issue at the UNHRC is also another tool in the hands of India.

Only time will tell if any hidden hand is behind the new party. However, given the current political trends among the Tamil people in the country a political party with a Tamil leadership and a conciliatory approach towards the government is most likely to fail, unless there is a powerful force behind it.

Disclaimer: Sri Lanka Bharatiya Janatha Party: Is it India’s baby? - Views expressed by writers in this section are their own and do not necessarily reflect Latheefarook.com point-of-view