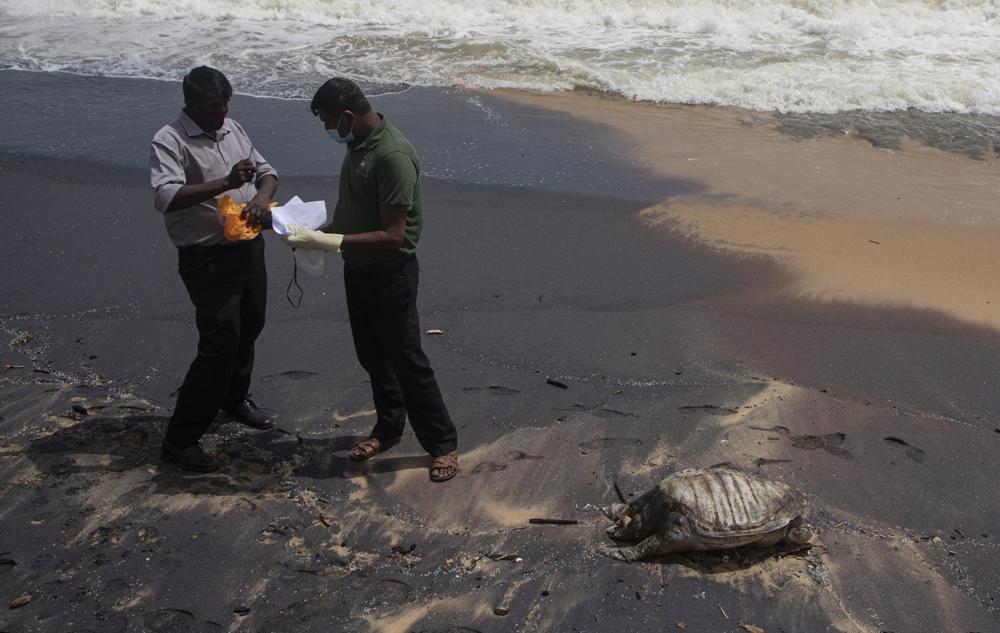 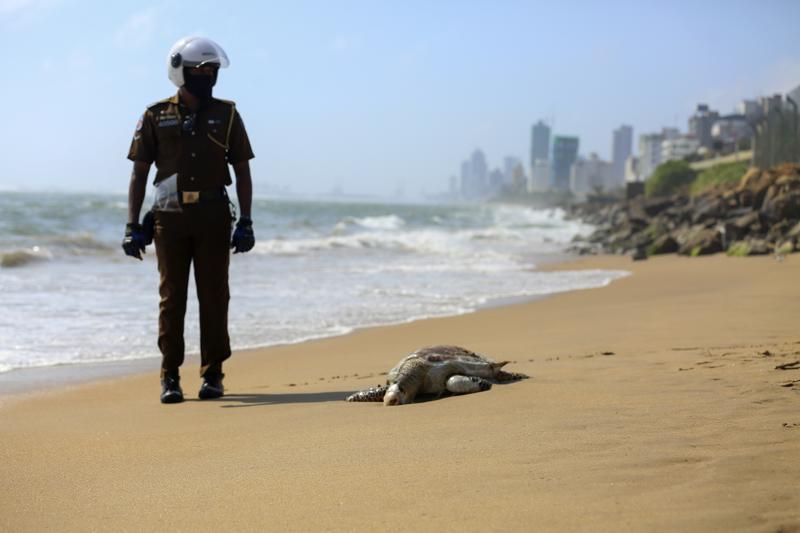 COLOMBO, Sri Lanka (AP) — Nearly a hundred carcasses of turtles with throat and shell damage, as well as a dozen dead dolphins and a blue whale, have washed ashore in Sri Lanka since a container ship burned and sank, raising fears of a severe marine disaster.

Ecologists believe the deaths were directly caused by the fire and release of hazardous chemicals while the Singapore-flagged X-Press Pearl burned for 12 days and sank last week off Sri Lanka’s main port in the capital Colombo. Government officials, however, said these causes were “provisionally” confirmed and the investigation was continuing.

The fire started on the ship on May 20 and dead marine species started washing ashore days later.

The Sri Lankan navy believes the blaze was caused by its chemical cargo, most of which was destroyed in the fire. But debris including burned fiberglass and tons of plastic pellets have severely polluted the surrounding waters and a long stretch of the island nation’s famed beaches.

Post-mortem analysis on the carcasses are being performed at five government-run laboratories and separately by the Government Analysts Department, said an official of the wildlife department who spoke on condition of anonymity as the official was not authorized to speak to the media.

“Provisionally, we can say that these deaths were caused by two methods — one is due to burns from the heat and secondly due to chemicals. These are obvious,” said Anil Jasinghe, secretary of the environment ministry.

He refrained from giving an exact cause, saying “post-mortem analysis are still being conducted.”

Thushan Kapurusinghe of the Turtle Conservation Project blamed the fire and chemicals the ship carried for killing the turtles.

With over three decades experience on turtle conservation, Kapurusinghe said the dead turtles had oral, cloacal and throat bleeding and “specific parts of their carapace have burns and erosion signs.”

The sea off Sri Lanka and its coastline are home to five species of turtles that regularly come to lay eggs. March to June is the peak season for turtle arrivals.

Lalith Ekanayake, a marine and coastal ecologist, suspects, based on the nature of the fire and amount of chemicals, that “at least 400 turtles may have died and their carcasses may have sunk in the sea or drifted to the deep sea.”

Sri Lanka plans to claim compensation from X-Press Feeders, the ship’s owner, and already have submitted an interim claim of $40 million.

Disclaimer: Turtle carcasses wash ashore in Sri Lanka after ship fire By BHARATHA MALLAWARACHI - Views expressed by writers in this section are their own and do not necessarily reflect Latheefarook.com point-of-view