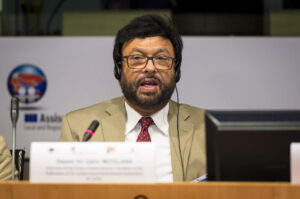 Former State Minister Ali Zahir Moulana claims Rs. 60,000 each was charged for a coffin and ash from the families of three Muslim coronavirus victims.

He said the money was demanded from the families of three Muslim coronavirus victims who died last week.

“In the case of the 3 Muslim COVID19 deaths which occurred yesterday (28) – 2 from Slave Island & 1 from Maligawatte, the families were forcibly demanded of their consent to cremate and an exorbitant sum in excess of Rs. 60,000 each in cash allegedly for the coffin and ash,” the former Parliamentarian tweeted today.

He said that the three families refused to give their consent to cremate nor part with such an exorbitant sum of cash which they couldn’t afford.

The Police were reportedly then called in and despite immense hostility and harassment the families remained resilient and left.

“Why are these unfortunate families subject to such harsh treatment? How many destitute families have been swindled and harassed in the name of racism, all while struggling over the tragic loss of their loved ones & then forced to witness them being cremated against their wishes?” he said in his tweet.

Muslims in Sri Lanka are demanding the right to bury the remains of their family members who die as a result of the pandemic as opposed to cremating them.

However, the Government has so far refused to give its approval to the request. (Colombo Gazette)

Disclaimer: Former State Minister claims Rs. 60,000 charged for coffin and ash - Views expressed by writers in this section are their own and do not necessarily reflect Latheefarook.com point-of-view