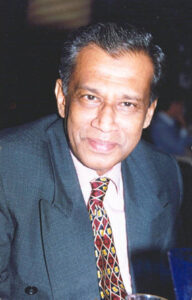 Latheef Farook began his journalistic career with the now defunct Independent Newspapers in 1966 before joining the Lake House Group of newspapers in 1971 where he worked with the Ceylon Daily News and the evening daily Ceylon Observer covering local politics and foreign affairs besides finance and economic sectors.

In 1976, Ceylon Daily News nominated him for the United Nations sponsored Dag Hammarskjöld scholarship for Third World journalists. In 1979, he led a group of ten Sri Lankan journalists to Dubai where he relaunched English language daily “Gulf News”.

A year later he joined the Khaleej Times where he covered for seven years almost every aspect of United Arab Emirates’ development program, besides covering the Indian elections of 1979, which brought Ms. Indira Gandhi to power. Rejoining the Gulf News in 1987 he worked as the Gulf News Bureau Chief in Bahrain and Saudi Arabia where he filed regular articles on the Gulf’s and Middle East’s sensitive political scenes, economy, finance, banking and social problems besides extensively interviewing visiting world leaders.

After almost a quarter century living and working in the Gulf, he returned home to Colombo in March 2003 where he began supplying feature articles on almost every aspect of Sri Lanka aimed at catering to Sri Lankan expatriates in the Gulf region, Europe, the Americas and the Far East.

Hand in hand he also began writing books on the current local and international scenes.

His first book” War on Terrorism-The Untold Truths” published by Malaysia based Strategic Information and Research Development deals in detail with the  conspiracy of associating terrorism  with Islam and Muslims to justify  the US-European and Israeli  invasion and destruction of Muslim countries.

His third book “America’s New World Order- EXPORTING WARS” deals in depth with the Israeli sponsored and United States led British, European and Russian invasions and destruction of Muslim countries since the collapse of former Soviet Union in 1979 and the planned massacre of millions of Muslims which continues to date with the mass killings of Muslims in Syria and Yermen.

The book documents the genocides committed in many Muslim countries from the never ending Israel atrocities on Palestinians, wars in Afghanistan, Bosnia, Kosovo, Chechnya, Iraq, Libya and Algeria to Somalia, Syria and Yemen.  It also deals with the ongoing campaign against Islam and Muslims worldwide.

His book “Muslims under Siege” deals with the atrocities committed by defeated Sri Lankan President Mahinda Rajapakse regime on the island’s Muslims. He also compiled a book “Mayhem during Curfew” on the attacks on Muslims at Aluthgama, Dharga Town and Beruwala in the west coast of Sri Lanka in June 2015.

Served as a member of the board of management of the Bandaranaike Centre  for International affairs, BCIS in 2014 and 2015.

In May 2015 he was invited on a lecture tour to Britain.  During the month long tour he was honored  at the Sri Lankan Muslim Cultural Centre (SLMCC) in the London Borough of Harrow, for his services in highlighting burning Muslim issues in the island and abroad and creating awareness both within the community and the country as a whole.

Pinnacle of his career was when the Sri Lanka Press Institute awarded him the prestigious Lifetime Achievement Awards for journalism at a glittering ceremony at Mount Lavinia Hotel in July 2015.

His book “India lost Kashmir “ ,launched   in Colombo in 2016,  is a collection of articles on the Indian occupation and the endless  atrocities committed by Indian armed forces on Kashmiri Muslims to crush their struggle for freedom  since the partition of the subcontinent in 1947.

Early this year he compiled a book on articles from writers from all over the world on the Myanmar government sponsored genocide of Muslims in the fertile and resource rich Rakhine region. This book, Genocide of Rohingya Muslims sponsored by a well-wisher, is being distributed free to universities and libraries here in the island and abroad.

His book-HOPE SHATTERED-Maithri-Ranil’s Promises and Failures- on the unwanted and shameful racist violence against the island’s Muslims under the present government was released in March 2019.

His book “Foreign Presence in Sri Lanka” published by Sri Lankan Journalists for Global Justice”  in January 2020 provides a clear picture of  the penetration of foreign forces  and its overall impact  in the island.

One of the great and glorious speeches delivered in unelected Awami Parliament by no other than the heroic, patriotic and nationalist DeshKonnya দেশকন্যা Barrister Rumin Farhana. In a blatant suppression of…