The Muslimregion ofXinjiangin the north-west of China is the country’s largest region.This region had its own nation state until 1949 when China absorbed itas part of its territory.

Located in the former Silk Road,Xinjiangtakes up one-sixth of China’s landmass and borders eight countries, including Pakistan, Kazakhstan, and Kyrgyzstan.Itis rich in oil and home tolargest coal and natural gas reserves.

It has a population of eleven million Uyghurs who are an ethnically Turkic community from Central Asia and practiced Islam since tenth century.

In view of the strategic importance and the vast natural resources, China wanted to control theregion and started settling Hans Chinese, the country’s dominant ethnic group,  who were given all governmentjobs, privileges and control over the resources.

Uyghur Muslims see the influx of Han as an attempt to stamp out their cultural, ethnic and religious identity .Uyghur resented and refer to the region as East Turkestan. Some argue that it ought to be independent from China as it was before 1949.“We are Uyghurs, this is our identity and we want to keep it”they said.

Today Xinjiang is an important link in China’s Belt and Road Initiative, a massive development plan stretching through Asia and Europe. Beijing hopes to eradicate any possibility of separatist activity to continue its development of Xinjiang.

“As part of this campaign China has been cracking down on the Uyghur community for years, repressing them from practicing their religion, wearing their traditional Uyghur attire or speaking the Uyghur language.

Chinese authorities in Xinjiang began rounding up Muslim men and women since2017 and detainthem in camps .  Around two million Uyghur’s and members of other minorities from Xinjiang are believed to be held in the camps, where they are forced to study Marxism, renounce their religion, work in factories and face abuse.

Meanwhile a public tribunal set up by a prominent British human rights lawyer Sir Geoffrey Nice concluded thatChina‘s government has committed genocide and crimes against humanity against the Uyghur people. It was set up  to hold China accountable for its treatment of the Uyghur’s and other predominantly Muslim and ethnic Turkic minorities in Xinjiang.

“On the basis of evidence heard in public, the tribunal is satisfied beyond reasonable doubt that China, by the imposition of measures to prevent births intended to destroy a significant part of the Uyghurs in Xinjiang as such, has committed genocide,” the judgment said.

The report said President Xi Jinping and other senior officials “bear primary responsibility” for what has occurred in Xinjiang. “This vast apparatus of state repression could not exist if a plan was not authorized at the highest levels,” it added.

But the report said China had also engaged in crimes against humanity in Xinjiang, including rape, enforced sterilization, torture, imprisonment, persecution, deportation and enforced disappearance.

The judgment drew from testimony of experts and Uyghur witnesses — some of whom alleged they were subjected to beatings, sexual violence, torture and sleep and food deprivation as well as separation from their children.

The scale of the Chinese efforts to harass, detain and extradite Uyghurs from around the world, and the cooperation it is getting from governments in the Middle East and North Africa, is described in unprecedented detail in a new report, “Great Wall of Steel,” by the Woodrow Wilson Center’s Kissinger Institute on China and the United States.

“The Chinese are quite scared of what Muslim populations think of their treatment of the Uyghurs and have exerted particular effort in influencing government and popular opinion in those countries,” said Zenz, who is a senior fellow in China studies at the Victims of Communism Memorial Foundation, a nonprofit based in Washington.

According to reportsthe Chinese government is not only mistreating Uyghurs within China’s borders, it is hunting them down abroad — with help from countries like Saudi Arabia, Egypt and the United Arab Emirates — to clamp down on criticism of Beijing’s repression of Muslim minorities.

“This is complete callousness on the part of Saudi Arabia, UAE and Egypt who call themselves Muslims  knowing what will happen to these Uyghurs when they get to China,” Zenz said. “The Chinese government wants to cleanse Uyghurs worldwide so that there are no pockets of Uyghurs outside of China’s borders that are not in line with Beijing’s narrative.”

“I have learned from interviews with Uyghur sources in the UAE that Chinese police coordinated the Egypt crackdowns with Dubai. Uyghur students who attempted to flee to the UAE from Egypt were picked up as a part of this coordination,” Jardine wrote.This is the shameful state of affairs in the Muslims countries of Egypt, Saudi Arabia and UAE ruled by pro-western despots.

So far, China has managed to avoid widespread condemnation from the Muslim world. Beijing has been careful to emphasize its more favorable treatment of the Hui Muslim population who also inhabit Xinjiang and other Chinese regions. 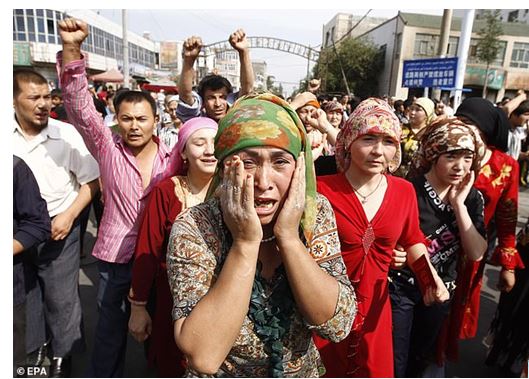 Accuses British human rights lawyer Sir Geoffrey Nice’s public tribunal - Views expressed by writers in this section are their own and do not necessarily reflect Latheefarook.com point-of-view