Pilgrims performing rituals in the Ganges river in Haridwar, one of India’s holiest cities. A group of militant monks used Haridwar as the site to call for violence against Muslims.

Activists and analysts say calls for anti-Muslim violence — even genocide — are moving from the fringes to the mainstream, while political leaders keep silent.

The police officer arrived at the Hindu temple here with a warning to the monks: Don’t repeat your hate speech.

Ten days earlier, before a packed audience and thousands watching online, the monks had called for violence against the country’s minority Muslims. Their speeches, in one of India’s holiest cities, promoted a genocidal campaign to “kill two million of them” and urged an ethnic cleansing of the kind that targeted Rohingya Muslims in Myanmar.

When videos of the event provoked national outrage, the police came. The saffron-clad preachers questioned whether the officer could be objective.

“Biased?” Mr. Narsinghanand said, according to a video of the interaction. “He will be on our side,” he added, as the monks and the officer broke into laughter.

Once considered fringe, extremist elements are increasingly taking their militant message into the mainstream, stirring up communal hate in a push to reshape India’s constitutionally protected secular republic into a Hindu state. Activists and analysts say their agenda is being enabled, even normalized, by political leaders and law enforcement officials who offer tacit endorsements by not directly addressing such divisive issues. 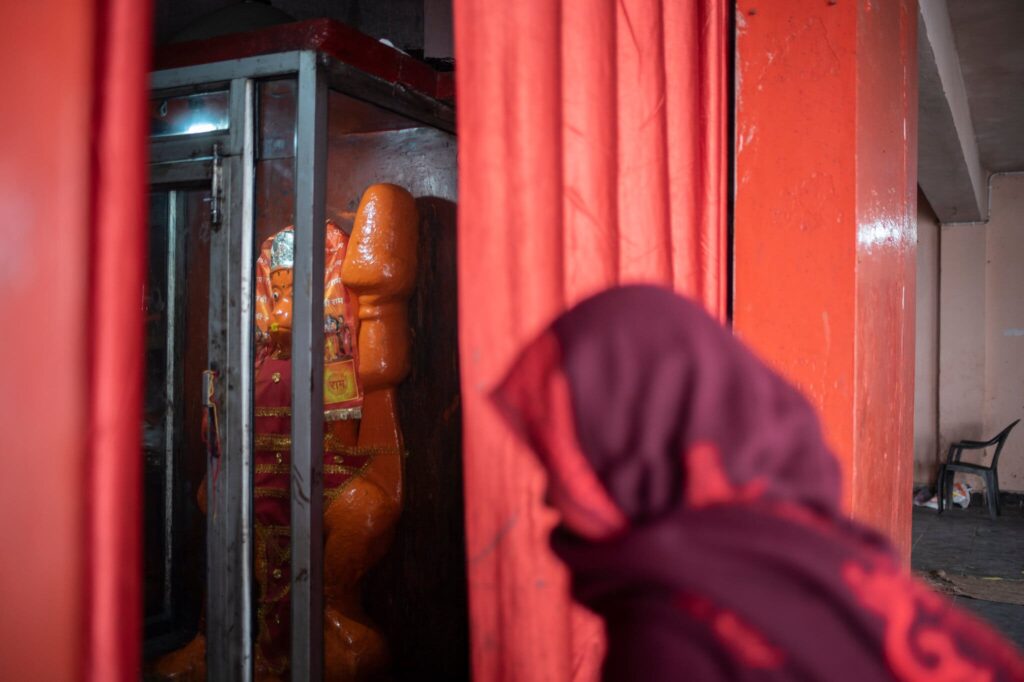 A statue of the Hindu god Hanuman at Dasna Devi temple in Ghaziabad, India.Credit…Saumya Khandelwal for The New York Times

After the monks’ call to arms went viral, Prime Minister Narendra Modi and his top leaders remained silent, except for a vice president with a largely ceremonial role who warned that “inciting people against each other is a crime against the nation” without making a specific reference to Haridwar. Junior members of Mr. Modi’s party attended the event, and the monks have often posted pictures with senior leaders.

“You have persons giving hate speech, actually calling for genocide of an entire group, and we find reluctance of the authorities to book these people,” Rohinton Fali Nariman, a recently retired Indian Supreme Court judge, said in a public lecture. “Unfortunately, the other higher echelons of the ruling party are not only being silent on hate speech, but almost endorsing it.”

Mr. Narsinghanand was later arrested after he ignored the police warning and repeated calls for violence. His lawyer, Uttam Singh Chauhan, said his speeches may have been a reaction to anti-Hindu comments by Muslim clerics.

Mr. Modi’s governing Bharatiya Janata Party did not respond to requests for comment.

“Does the prime minister or home minister need to address every small, trivial issue?” said Vinod Bansal, a spokesman for the World Hindu Council, a party affiliate. “The accused have already been arrested. The secular groups will always highlight such incidents, but not when Hindus, Hindu gods and goddesses are under attack.”

Vigilantes have beaten people accused of disrespecting cows, considered holy by some Hindus; dragged couples out of trains, cafes and homes on suspicion that Hindu women might be seduced by Muslim men; and barged into religious gatherings where they suspect people are being converted. 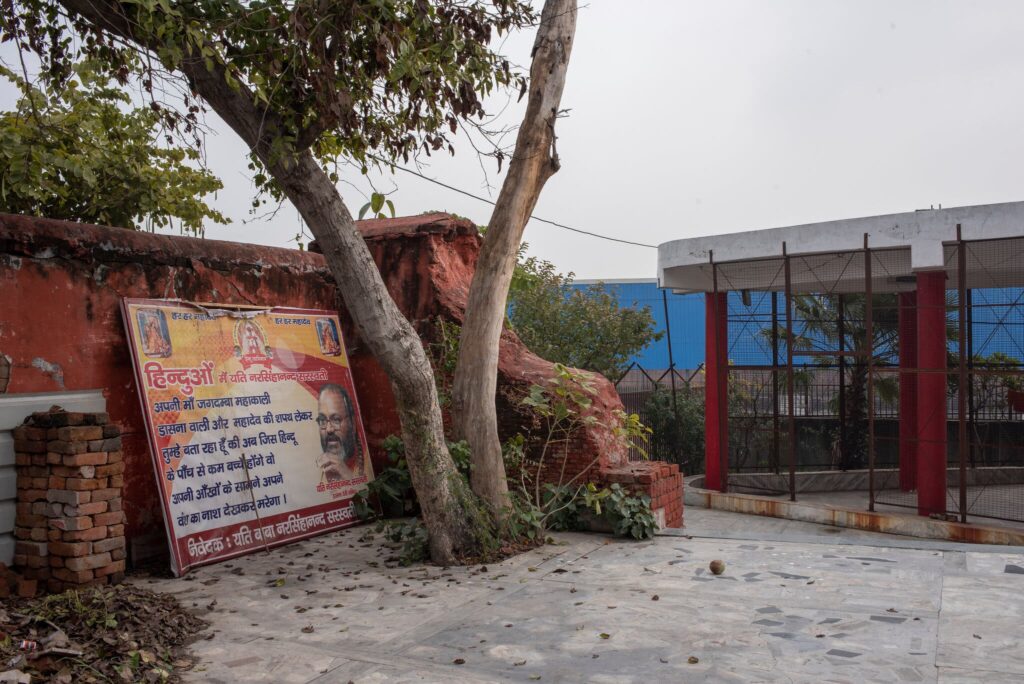 In recent weeks, global human rights organizations and local activists, as well as India’s retired security chiefs, have warned that the violent rhetoric has reached a dangerous new pitch. With right-wing messages spreading rapidly through social media and the government hesitant to take action, they are concerned that a singular event — a local dispute, or an attack by international terror groups such as Al Qaeda or the Islamic State — could lead to widespread violence that would be difficult to contain.

Gregory Stanton, the founder of Genocide Watch, a nonprofit group, who raised similar warnings ahead of the massacres in Rwanda in the 1990s, told a U.S. congressional briefing that the demonizing and discriminatory “processes” that lead to genocide have been well underway in India.

In an interview, he said Myanmar was an example of how the easy dissemination of misinformation and hate speech on social media prepares the ground for violence. The difference in India, he said, is that it would be the mobs taking action instead of the military.

“You have to stop it now,” he said, “because once the mobs take over it could really turn deadly.”

The Dasna Devi temple in Uttar Pradesh state, where Mr. Narsinghanand is the chief priest, is peppered with signs that call to prepare for a “dharm yudh,” or religious war. One calls on “Hindus, my lions” to value their weapons “just the way dedicated wives value their husbands.” 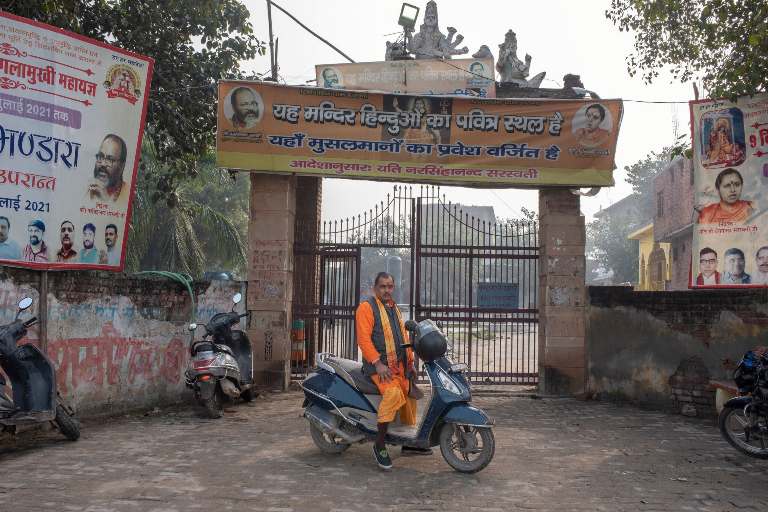 The monks’ anger is rooted in a sense of internalized victimhood that dates to the founding of India’s republic after independence from British rule in 1947. When Pakistan was carved out of India in a bloody partition that left hundreds of thousands dead, the Hindu right was incensed that the founding fathers turned what remained of India into a secular republic.

They celebrate a Hindu hard-liner’s assassination of Mohandas Gandhi — a renowned symbol of nonviolent struggle, but to them a Muslim appeaser. Pooja Shakun Pandey, a monk at the Haridwar event, has held re-enactments of Gandhi’s assassination, firing a bullet into his effigy as blood runs down.

The forces that shaped the ideology of Gandhi’s assassin, Nathuram Godse, have slowly risen from the fringes to dominate India’s politics.

Mr. Modi, the prime minister, spent decades as a mobilizer for the Rashtriya Swayamsevak Sangh, the century-old right-wing organization to which Mr. Godse belonged. Mr. Modi’s party sees the group as the fountainhead of its political ideology and has relied heavily on its vast network of volunteers to mobilize voters and secure victories.

When he was chief minister of Gujarat, Mr. Modi saw firsthand how unchecked communal tensions could turn into bloodletting.

In 2002, a train fire killed 59 Hindu pilgrims. Although the cause was disputed, violent mobs, in response, targeted the Muslim community, leaving more than 1,000 people dead, many burned alive.

Rights organizations and opposition leaders accused Mr. Modi of looking the other way. He rejected the allegations as political attacks.

After he rose to the country’s highest office in 2014 on a message of economic growth, there was hope that Mr. Modi could rein in the fury. Instead, he has often reverted to a Hindu-first agenda that inflames communal divides.

In 2017, Mr. Modi picked Yogi Adityanath, a monk who had started a youth group accused of vigilante violence, to lead Uttar Pradesh, India’s largest state with more than 200 million people.

In his saffron robe, Mr. Adityanath has legislated a ban on religious conversion by marriage, an idea that he calls “love jihad,” in which Muslim men lure Hindu women to convert them. His group has served as moral police, hounding interfaith couples and punishing anyone suspected of disrespecting cows.

As Mr. Adityanath campaigned for re-election, the group held a meeting in New Delhi around the same time as the monks’ event. With a picture of Mr. Adityanath behind them, attendees took an oath to turn India into a Hindu state, even if it meant killing for it.

Mr. Adityanath’s office would not address his current relations with the group, but said the chief minister “had nothing to do” with the meeting.

Dhirendra K. Jha, a writer who has studied the rise of Hindu nationalism, said he worried that extremists now dominate India’s politics in such a way that those who call for violence feel protected.

“Unless this is dealt with, the kind of consequences that may happen — I can’t even imagine, I don’t dare to imagine,” said Mr. Jha.

The choice of Haridwar as the venue for a bold call to violence was strategic — the city attracts millions of visitors annually, often for religious festivals and pilgrimages.

The riverbank was recently busy with seers and worshipers. Families picnicked and took dips in the chilly water. Even as some religious authorities appeared troubled by the calls for violence, they were reluctant to condemn them.

Pradeep Jha, the main organizer of the city’s largest pilgrimage festival, said he shared the vision of a Hindu state, not through violence but by urging India’s Muslims to convert back; in such a view, everyone in India was Hindu at one point.

“I believe we need to pursue our goals with patience, with peace,” he said. “Otherwise, what is our difference with others?”

Mr. Narsinghanand has made a name for himself doing the exact opposite.

As he sees it, India’s Muslims — who account for 15 percent of the population — will turn the country into a Muslim state within a decade. To prevent such an outcome, he has told followers that they must “be willing to die,” pointing to the Taliban and Islamic State as a “role model.”

In 2020, Mr. Narsinghanand was among the hard-liners stoking tensions during monthslong protests over a citizenship amendment seen as discriminatory toward Muslims. He called for violence, using the language of a “final battle.” “They are jihadis, and we will have to finish them off,” he said.

Riots followed in New Delhi, with 50 people killed, a majority of them Muslims.

Mr. Narsinghanand was always observant, but not an extremist, according to his 82-year-old father, Rajeshwar Dayal Tyagi.

He was a top college student, earning a scholarship to study food technology in Moscow. There, he helped open a vegetarian restaurant for Indian students that still operates.

Returning to India in 1996, he started a computer training institute with money from Mr. Tyagi’s pension. He soon dedicated his life to being a monk, leaving behind his wife and young daughter, said his father.

“I feel pained, I feel angry, it gives me stress,” his father said. “It’s not a good idea to use harsh words against anybody.”

Despite the police warning, Mr. Narsinghanand and his fellow monks repeated their messages of hate, including on national television and social media.

“This Constitution will be the end of the Hindus, all one billion Hindus,” Mr. Narsinghanand said at a virtual event. “Whoever believes in this system, in this Supreme Court, in these politicians, in this Constitution, in this army and police — they will die a dog’s death.”

When the police came to arrest an associate, he threatened the officers, who politely urged him to calm down. “You will all die,” Mr. Narsinghanand is seen in a video telling them.

The police arrested Mr. Narsinghanand on Jan. 15, and he was charged in court with hate speech.

Mr. Amritanand said the call for arms was justified because “within the next 10 to 12 years there will be a horrible war that will play out in India.”

Late last month, the monks again sounded a violent call to create a Hindu state, this time at an event hundreds of miles away from Haridwar in Uttar Pradesh. They threatened violence — referencing a bombing of India’s assembly — if Mr. Narsinghanand was not released.

Ms. Pandey described their actions as defensive. “We must prepare to protect ourselves,” she said.

To the Haridwar police, the event in Uttar Pradesh did not count as a repeat offense. Rakendra Singh Kathait, the senior police officer in Haridwar, said Mr. Narsinghanand was in jail because he had acted again in the city; others like Ms. Pandey got a warning.

“If she goes and says it from Kolkata, it doesn’t count as repeat here,” Mr. Kathait said.

Disclaimer: As Officials Look Away, Hate Speech in India Nears Dangerous Levels - Views expressed by writers in this section are their own and do not necessarily reflect Latheefarook.com point-of-view