In an interview with Karan Thapur on the BJP instigated controversy over Hijab in Karnataka, award winning author Arundhati Roy expressed her fears that the Hindutva nationalism may lead to the breakup of India as it happened in Soviet Union and Yugoslavia.
A three day Religious Parliament, “Dharma Sansad”,in Haridwar in Uttarkhand between December 17 and 19, called for the genocide of two million Muslims. It ws shocking.
Such a call in violation of all accepted human values shamed India. In any civilized society such hate mongers would be ostracized and eliminated.
However it doesn’t happen in India-the so called largestdemocracy.
In a sign of approval Prime Minister Narenda Modi, once accused of committing genocide of Muslims in Gujarat killing more than 200o and was declared persona non grata by the world including United States, remains silent
Modi government has been known for persecuting Muslims. It was under his patronage that violence was unleashed in New Delhi in the Muslim areas causing death and destruction.
Modi’s rule has been known for violent attacks on Muslims, destroying their commercial, industrial and residential properties and turning them into paupers. Rape and gang rape were daily occurrence especially in the northern Indian state of Uttar Pradesh ruled by a chief minister who calls himself a Hindu priest and called his Hindutva thugs to dig out dead and buried Muslim women and rape.
In the midst, crossing all limits of decency, the appointment of Santishree Dhulipudi Pandit, a Hindu hardliner who supported calls for genocide of Muslims, was appointed as Vice Chancellor of Jawaharlal Nehru University- prestigious seat of learning
It was under this hostile environment on January 1, 2022, a Hijab row erupted in the Indian state of Karnataka after the management of a government pre-university college in the coastal town of Udupi barred six Muslim girls from attending classes for wearing Hijab.

What is Hijab?
Dr Javed Jamil, a thinker and writer with over twenty books had this to stay in his article.
Thanks to the designs of the communal forces; the Hijab issue of Udupi (Karnataka) schools has become an international issue now. The welcome part is that most of the Indian political leaders of the country are supporting the right of Muslim girls to wear Hijab in schools. What needs to be understood however by the analysis as well as the courts is that Hijab for Muslim women is not a religious symbol but is the acceptance of high morality standards prescribed by Islam to suppress the lusts of the human beings and to safeguard the life, health and honor of women.
Hijab is the antidote of nakedness being pursued by the forces of modern ideologies governed by Economic Fundamentalism, which seeks to market all the human susceptibilities irrespective of their disastrous effects on individuals’ health, family peace and social order.
In India communal forces have an added agenda to keep harassing Muslims as much as possible and this becomes highly accelerated whenever elections are near.
The benefits of Hijab
Hijab is not a problem. Dr. Uasa pointed out that “even if Hijab is or is not part of one’s faith, it is good thing to cover your body parts for many reasons including both social and medical. Unnecessary sun exposure of sensitive facial skin leads to various types of skin cancers, covering scalp hair protects from pollution effects and brittleness of hair. Body revealing type indecent dresses like miniskirt, bikini etc. exposes girls/women to gender based crimes. However covering your body with clothes like Hijab, chunri, dupatta, Saree etc is socially and morally appreciable due to various benefits and oriental social standards and traditions.

When Muslims girls tried to enter the college the management closed the gate and kept them out. Inevitably Muslim girls sat outside the gate and continued their studies.

In the midst Hindu boys were brought into demonstrate to force the college against allowing Muslims girls inside the college.

The cowardice of Hindutvavadis exposed in Narendra Modi’s India as a lone Hijab-wearing girl student, Muskan, was heckled by RSS goons in saffron shawls at a Karnataka college who daringly shouted Allah-o-Akbar.
“Since I started studying (here), I’ve always worn the burka and hijab. When I entered class, I removed the burka… Principal has said nothing, outsiders started this,” Muskan, a student who was heckled by the despicable act of the vigilantes wearing saffron scarf,

As she parked her scooter in the parking, the saffron scarf group shouted at her and tried to surround her, but she remained unafraid and continued walking towards the college building. The story cascaded across the internet, and the students began protesting outside the school gate, reading their lessons.

Instead of pacifying the situation, other schools also started enforcing ban on hijab, out of fears of the RSS goons who also simultaneously started shouting pro-Hindutva slogans to worsen the situation.
Muslim students went to court seeking Justice, Unfortunately for them it was judiciary under BJP government and they cannot expect justice. If judiciary is independent Modi would have gone to gallows for the crimes against Muslims.
As expected court ordered the girls to enter college without Hijab and the Muslim girls refused saying that religion is more important than studies.

Lashing out at the Karnataka government, Congress leader in the legislative council B.K. Hariprasad in Karnatka state said, “BJP is fishing in dangerous waters by meddling in Hijab-Saffron row in Udupi district. It shows their sinister plans to create issues out of nothing for petty political gains. BJP is posing risk to students’ education which is already affected by the pandemic.”

Some senior government leaders, including members of Parliament Shashi Tharoor and Rahul Gandhi, have slammed Karnataka schools for allowing religious expression only for Hindu students. “There is no law banning religious forms of dress,” Congress MP Shashi Tharoor has expressed his solidarity with female students barred from attending classes while wearing hijab at some colleges in Karnataka’s Udupi district.

Unlike in the past, Hindu men and women of all walks of life, from all over India and beyond, began fiercely expressed their support to Muslim girls to wear Hijab which is their constitutional rights,
Celebrated thinker Noam Chomsky, one of the world’s leading public intellectuals and Professor Emeritus at the Massachusetts Institute of Technology, said the “pathology of Islamophobia”, now growing throughout the West, was “taking its most lethal form in India where the Modi government is systematically dismantling Indian secular democracy and turning the country into a Hindu ethnocracy”. 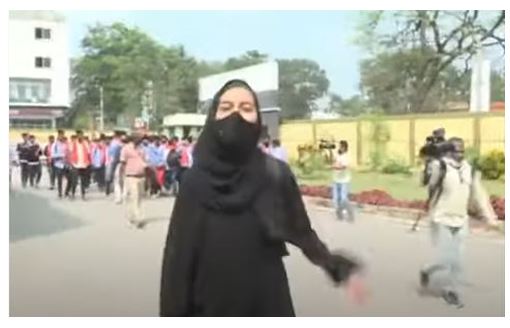 Meanwhile Jeddah based The Organization of Islamic Cooperation (OIC) has expressed deep concern over recent public calls for the genocide of Muslims in Hindu Parliament, harassment of Muslim women on social media and the banning of female Muslim students wearing the hijab. The OIC General Secretariat urged India to ensure the safety, security and wellbeing of the Muslim community while protecting the way of life of its members and to bring the instigators and perpetrators of acts of violence and hate crimes against them to justice.

In his article titled the Riseof Hindutva fascism belies India’s claim to be a secular democracy columnist P.K.Niaz had this to state;

India’s reputation as the world’s largest democracy and a country that upholds secular values has been eroded ever since the right-wing Hindu nationalist BJP swept into power in 2014. Several moves by the BJP government under Prime Minister Narendra Modi seem designed to change the secular and democratic fabric of India into that of a purely right-wing Hindu nation.

After the BJP received an even bigger mandate in 2019, its Hindutva agenda became more visible. Moreover, a number of groups affiliated to the ruling party have started to threaten India’s Muslims, the country’s largest minority community, and their institutions. The latest manifestation of this

Modi and his BJP are pursuing a Hindu majoritarian, anti-Muslim agenda that threatens the country’s status as an officially secular republic and violates international human rights norms.

It is clear that this government is working towards a purely Hindu totalitarian state. In August 2019, the ruling party amended the Constitution to strip Muslim-majority Kashmir of its autonomy. Then, in November, the Supreme Court issued a ruling enabling the construction of a Hindu temple on the site of a 16th-century mosque demolished more than two decades ago by Hindu communalist forces in the northern city of Ayodhya. The irony is that the court admitted the existence of a mosque but decided to give the Waqf (religious endowment) land to Hindus citing “majority sentiments”.

The anti-Muslim policies of the Hindutva rulers now target schools and colleges, and the hijab (head covering) row is escalating. The banning of the hijab in the BJP-ruled southern Indian Karnataka state has prompted strong protests, with students barred from attending classes if they insist on wearing one. This is happening in a country where Hindus sport the tilaka on their foreheads, Christian nuns wear their veils and Sikhs wear their turbans.

It was during discussing the fate of democracy in India under this circumstance that Arundhati Roy told in an interview with Karan Thapur that the Hindutva nationalism may lead to the breakup of India in the way it happened in Soviet Union and Yugoslavia .

India like Soviet Union and Yugoslavia - Views expressed by writers in this section are their own and do not necessarily reflect Latheefarook.com point-of-view