Commenting on the genocide of Muslims in Gujrath in February 2002  Prof Ram Punyani  who works full time for communal harmony stated that; “Dalits and Adivasis were mobilized to unleash the violence against the hapless innocent Muslims, accompanied by the propaganda which demonized the Muslim community as a whole.

There was  active collusion of state machinery and the communal forces were on display. Backed by Prime Minister Atel Bihari Vajpayee’s  BJP ruled central government, Narendra Modi  instructed the officials to sit back while the carnage was underway.

Here are some of the comments appeared in the local dailies in India, websites  and blogs  expressing the feelings of victims;

*Just before religious riots, Imtiaz Ahmed Hussain Qureshi gifted a silver necklace as a wedding present to his Hindu neighbor’s daughter. Qureshi saw this very same Hindu neighbor set fire to his house in a rampage of looting, burning and killing that targeted the area’s minority Muslim community on 28 Feb 2002.

*Ten members of Pathan’s extended family, including his mother, two nieces and two sisters-in-law, were hacked and burned to death. Pathan, who was 24 years old at the time, was doused with petrol but survived because he managed to pull off his shirt and run to the top floor of a neighboring house.

*Yakub Rasul Patel’s wife, Bilkiz Bano, was 19 years old in 2002 and five months pregnant. She was gang-raped and 14 members of her family, including her infant daughter, were murdered.

*On a lonely stretch a few km away, one neighbour raped Bilkis and another shoved his foot into her mouth, even as she desperately wanted to tell them she was pregnant. They then tossed her three-year-old girl in the air so that she would smash her head upon landing on the rocky ground on that road to death in Panevala.

*It’s difficult to believe that the people who I supplied milk each morning had raped my wife in turns and slaughtered my relatives. They knew who Bilkis was, their milkman’s wife.

http://outlookindia.com/article.aspx?280032
*How Bilqis Bano’s daughter was snatched from her hands, flung against a rock, killed, and the pregnant woman raped repeatedly; how Zahira Sheikh survived the grisly burning of the Best Bakery in which her family was roasted alive; how limbs of children were hacked and little boys flung to their death in Naroda Patiya; how Ehsaan Jafri begged for the life of those who had sought his protection in Gulberg Society; how his widow Zakia Jafri still fights for justice and says her husband called the CM’s residence for help. The photograph of Qutubuddin Ansari begging for his life epitomises the plight of an entire community in Gujarath.

http://blogs.timesofindia.indiatimes.com/the-main…
How does it feel to know and live day by day with the knowledge that Ehsan Jaafri, a secular intellectual, a poet, a man who had gone beyond identity politics, whose fair name was identified more by his calling in life than religion, was killed in the most despicable, medieval and barbaric manner during the Gulbarga Society riots? His RSS-VHP murderers clasped a collar used to clutch a dog’s neck around his neck; he was paraded around in this condition; he was dragged mercilessly; first his hands were chopped off; then legs; he was cut into pieces — imagine something that horrible happening to someone’s father or mother or anyone’

We must thank the wife and children of Ehsan Jaafri for not demanding the public execution of Narendra Modi, who personally supervised what happened to Ehsan Jaafri.

http://www.firstpost.com/politics/gujarat-riots-1…
Survivors speak of the use of numerous tiny bottles of foreign import which not only ate into the skin but scorched the walls indelibly.

http://epw.in/epw/uploads/articles/17186.pdf
The horrific gang rapes and mass murders   accompanied by arson attacks on everything owned by Muslims or associated with them including places of worship, would qualify the statewide pogrom as a crime against humanity if not genocide as defined in the Rome Statute of the International Criminal Court.

http://www.sacw.net/article2560.html
What happened was not at all communal riot but an organized carnage, some calling it even genocide. It was not fight between two communities but well-organised attack by a section of majority community with full help from entire state machinery.

http://www.rediff.com/news/column/column-gujarat-…
The Gujarat genocide in 2002 and subsequent pervasive subversion of governmental machinery to sabotage justice delivery to riot victims, has to be understood as a man-made disaster.

Muslims rushed to hills and jungles to escape death without food or water, eating only grass, before reaching camps situated in towns. Most found shelter in local Masjids and schools and hundreds of them were packed into small school buildings or tents. Several Muslims lived in graveyards.

The government didn’t set up a single relief camp for Muslims. Instead, the BJP set up “Hindu relief camps” for a handful of Hindus living in Muslim-dominated areas, which also fled when Muslims were attacked.

Serious lapses on the part of the state and the judiciary in Gujarat were later brought to light by the Supreme Court and the NHRC which played an active role in bringing out the injustices in the State.   Accused of unabashed complicity in the religious clashes, Narendra Modi,   indirectly egged on the Hindu mobs who led most of the attacks. A favourite protégé of L. K. Advani  who specially picked up Narendra Modi to join him in the rathyatra, or crusade which intensified Hindu-Muslim hostility all over the country giving the VHP and its youth wing, Bajrang Dal, a firm foothold in Gujarat.

Muslim victims had some ray of hope when a Congress government came to power in the centre. But even the Congress government of Prime Minister Manmohan Singh did not give the Muslims any relief. Instead hailed Modi’s Gujarat as the best governed and most business friendly state in India.

Earlier Supreme Court established a Special Investigation Team, SIT, for further probe into Ode Massacre .However sacked IPS officer Sanjeev Bhatt accused the state government which he described as “laboratory of politics of hatred” and the SIT headed by R.K Raghavan of destroying very valuable records related to the pogrom   to shield powerful persons from legal punishment. Sanjeeva Bhatt insisted that   Narendra Modi should be treated like a common criminal and must be brought to justice 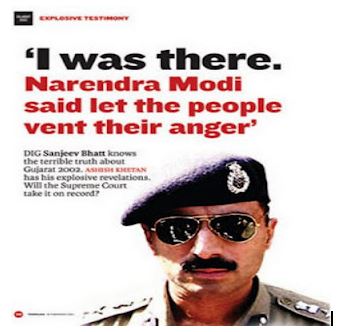 Meanwhile the Human Rights Watch stated in its  24 February 2012 report  that;    the  Authorities in India’s Gujarat state are subverting justice, protecting perpetrators, and intimidating those promoting accountability today. The state government has resisted Supreme Court orders to prosecute those responsible for the carnage and has failed to provide most survivors with compensation.

“The 2002 violence against Muslims in Gujarat persists as a dark blot on India’s reputation for religious equality,” said Meenakshi Ganguly, South Asia director at Human Rights Watch. “Instead of prosecuting senior state and police officials implicated in the atrocities, the Gujarat authorities have engaged in denial and obstruction of justice.”

Efforts to investigate and prosecute cases inside Gujarat were stalled and activists and lawyers involved in the cases have been harassed and intimidated, Human Rights Watch found. It has taken repeated interventions by the Supreme Court following appeals by activists and victims’ families to order re-investigations, oversee independent inquiries in some cases, or shift trials out of Gujarat to ensure progress towards justice.

In the past  increasing evidence has emerged of the complicity of Gujarat state authorities in the anti-Muslim violence, Human Rights Watch said.

Columnist Praveen Swami said, “with images of charred bodies and burned homes, what Gujarat witnessed was a fascist pogrom, conducted by organized death squads of the Hindu Right with the entire State apparatus at their disposal. The pogrom was initiated to ensure that the State’s Muslim population remained confined to its ghettos, and that the authority of the Hindu Right remained stamped forever on Gujarat’s political landscape.  If Hindu fascists ever wield unchecked power, Gujarat is what India might look like”.

Twenty years later today Narendra Modi ,perhaps replaced Mahatma Gandhi’s peaceful  India  with Hindu fascism ,is Prime Minister of India carrying out his vicious hate  campaign and violence against Muslims all over India. The latest being the Karnataka hijab issue.

Leading light of socialist movement, George Fernandez, went to the extent of taking the violence against minority women in the stride by saying that rape is nothing new and it happens in such situations. What more was needed for the rioters to run amuck and to central BJP leadership to let the things go on. The pattern of violence against women was particularly horrific, targeting at their reproductive organs and shaming them to no end”.

Police investigations suggested that politically motivated plans had been made in advance to attack the train to trigger off the anti-Muslim pogroms. Many Hindus privately told media personnel that there was something far more sinister in the attack as the violence was part of a careful plan by the BJP to drive Muslims out of mainstream areas in Ahmedabad and other places.

Police sided with the mobs and turned a blind eye and in many cases, they were part of the mob.  Of the more than 45,000 cases filed, only around 75 have been pursued while the rest were closed down citing lack of evidence.

An independent assessment  by a fact-finding team comprising representatives of the Communist Party of India (Marxist), the All India Democratic Women’s Association (AIDWA) and the Safdar Hashmi Memorial Trust (Sahmat), categorically stated that ‘the violence has mostly been constituted by state-sponsored attacks on Muslims, and that describing it as “riots” would be incorrect, as people who tried to help the victims were prevented or discouraged by the police, who were seen in the company of the mobs. Shops owned by Hindus remained untouched while Muslim-owned establishments were targeted and eyewitness accounts stated that two BJP Ministers led the mobs that indulged in looting and arson’.

According to their reports, the carnage had several new features. Muslims were attacked by their neighbors, not only in the lower-middle class areas but also in the upper-middle class localities; seemingly urbane Hindus also participated in the looting; Muslims were attacked even in areas where they constituted the majority; and more than 500 mosques ,Muslim shrines and dargahs were vandalized or destroyed. It was also the first time that tribal people had turned against Muslims in rural areas. Survivors explained to the CPI(M)-AIDWA team how the VHP incited the tribal people to attack Muslims and their establishments. The RSS and certain tribal people’s organizations affiliated to it, such as the Vanvasi Kalyan Parishad, directed violence against Muslims.

The reports of the CPI(M)-AIDWA team and the PUCL recorded sexual violence unleashed on Muslim women. Police personnel too perpetrated such crimes under the pretext of “combing operations”.  Maqsuda Bibi, at the Iqbal Primary School camp, told the delegation that her children were thrown into a well.

Disclaimer: Genocide of Muslims in Gujrath 2002

What others said. - Views expressed by writers in this section are their own and do not necessarily reflect Latheefarook.com point-of-view