February 27 marks the 20 anniversary of the burning of the train in Godhra in Gujarat which was exploited as pretext to commit genocide of Muslims there.

Gujarat, which should have been a shining example for Hindu-Muslim unity, as the two communities had coexisted in harmony for centuries, had been foremost in their attacks on Muslims who were among the first traders to settle, prosper, assimilate and adopt a strong Gujarati identity. Unfortunately, it was this very success that made Muslims vulnerable to the communal carnage unleashed by Hindu extremists from time to time.

Some of the most violent incidents of its kind took place in Gujarat the day after fifty-eight Hindus belonging to the VHP returning from the northern town of Ayodhya were killed on 27 February 2002, when one of the carriages of the Sabarmati Express train they were travelling in was burnt at the town of Godhra.

Almost three years later, during January 2005, a government inquiry, set up by the Congress party-led government, and headed by Retired Supreme Court Judge Umseh Chandra Bannerjee, stated that ‘the train fire began inside the train and it was not firebombed as revealed by evidence’. Dismissing suggestions that inflammable liquid could have been thrown at the train from the outside, Banerjee ruled out completely that inflammable liquid could have been used, as there was first a smell of burning, followed by smoke and flames. He said that the fire in the coach originated in the coach itself without any external input. Refuting charges that a Muslim mob threw petrol bombs at the train, Banerjee, citing eyewitness accounts, said that some people had been cooking in the carriage when it caught fire and criticised the railway authorities for prejudging the incident and not conducting a thorough inquiry.

Yet Muslims, false accused of burning the carriage, were attacked, killed and their property and businesses destroyed, depriving them of their livelihood. Visiting the scene on the same day, then Chief Minister Narendra Modi who is now the prime minister of India, was reported to have given the green light to the mobs waiting to go on their rampage on Muslims when he said that “the burning of the train was a pre-planned act and the culprits will have to pay for it”.

Later, police investigations suggested that politically motivated plans had been made in advance to attack the train to trigger off the anti-Muslim pogroms which killed around 7,000 people, mainly Muslims, contrary to the estimated 1,000 deaths. Many Hindus privately told media personnel that there was something far more sinister in the attack as the violence was part of a careful plan by Hindu hardliners supported by the BJP to drive Muslims out of mainstream areas in Ahmedabad and other places. They also described the attack as the culmination of Hindu extremist Sangh Parivar strategy, which left emotionally and economically shattered Muslims with nothing but their clothes on their backs.

Vishwa Hindu Parishad, V HP leaders,   led the attack, which killed Muslims in the heart of Ahmedabad. In Meghaninagar, VHP leader Deepak Patel led the Hindu attackers, killing 42 Muslims, including a former MP of the Congress Party, who was burnt to death when their housing complex, Gulbarg, was set ablaze. Nine VHP leaders led another attack which killed fifty Muslim factory workers living in a shantytown.

The mob used knives, axes, swords, iron and wooden rods, acids, gas cylinders and  all sorts of inflammable materials and almost every possible other weapon to slaughter Muslims in the cities and villages. In some cases, they got the entire Muslim populations in certain areas electrocuted. In many urban centres, explosives were used to blow up houses, shops, dargahs and mosques. Structures that could not be razed by the mobs were mowed down by trucks.

Describing the carnage, columnist Praveen Swami said, “With images of charred bodies and burned homes, what Gujarat witnessed was a fascist pogrom, conducted by organised death squads of the Hindu Right with the entire State apparatus at their disposal. The pogrom was initiated with two objectives. The first was to ensure that the State’s Muslim population remained confined to its ghettos, and the second to ensure that the authority of the Hindu Right remained stamped forever on Gujarat’s political landscape.

Police and the mobs

Police sided with the mobs and turned a blind eye when Muslims were burnt alive and their properties were being destroyed. In many cases, the police were part of the mob. Judge after judge questioned the role of the police and their failure to prevent the anti-Muslim carnage. Of the more than 45,000 cases filed, only around 75 have been pursued while the rest were closed down citing lack of evidence.

An independent assessment of the carnage by a fact-finding team comprising representatives of the Communist Party of India (Marxist), the All India Democratic Women’s Association (AIDWA) and the Safdar Hashmi Memorial Trust (Sahmat), categorically stated that ‘the violence has mostly been constituted by state-sponsored attacks on Muslims, and that describing it as “riots” would be incorrect, as people who tried to help the victims were prevented or discouraged by the police, who were seen in the company of the mobs. Shops owned by Hindus remained untouched while about fifty Muslim-owned establishments were targeted and eyewitness accounts suggested that two BJP Ministers led the mobs that indulged in looting and arson’.

The role of the Special Reserve Police (SRP) too came in for special condemnation. In Naroda Patiya, one of the places that witnessed the worst type of communal frenzy, a woman lost eleven of her family members in the violence. She told the delegation that when she begged the SRP personnel to help, they said, “You have to pay the price for burning Hindus in the train”.

In Pandarava village, where more than a hundred people were killed, the attack was led by the sarpanch. Several women were killed or injured while they tried to save their children or other family members. The victims told the delegations that the mobs comprised both local goons and outsiders who had come in trucks.

Serious lapses on the part of the state and the judiciary in Gujarat were later brought to light by the Supreme Court and the NHRC which played an active role in bringing out the injustices in the State. Independent observers and human rights groups continued to accuse the Gujarat’s BJP Government of Chief Minister Narendra Modi of attacks on Muslims. Accused of unabashed complicity in the religious clashes, Narendra Modi, a tea boutique owner turned RSS activist before ending up as BJP’s Chief Minister of Gujarat, indirectly egged on the Hindu mobs who led most of the attacks. A favourite protégé of L. K. Advani, specially picked up Narendra Modi to join him in the rathyatra, or crusade which intensified Hindu-Muslim hostility all over the country giving the VHP and its youth wing, Bajrang Dal, a firm foothold in Gujarat.

Numerous other independent reports too accused the State government of collusion in the violence, while an internal British report said the riots, far from being spontaneous, were pre-planned and carried out with the support of Narendra Modi to drive out Muslims from certain parts of Ahmedabad. Thus, Modi allowed those who carried out killings, rapes and arson to have a field day in the early stages of the riots.

Apparently, the mastermind of the pogrom, Narendra Modi, escaped unscathed as he was let off with a mild dressing down. He continued in power, owing to the support from the top brass of the BJP and the RSS, who certified that he had handled the crisis well.  His cover-up of the terror unleashed by Sangh Parivar cadre had apparently pleased them all.

So far, Muslim victims have depended on the generosity of philanthropists and non-government organisations. But even they have left. With a strict social and economic boycott imposed on them it appears the Muslims in Gujarat have been written off. They want to return to their homes but are unable to do so with a hostile Hindu population openly displaying boards proclaiming a “Hindu village in a Hindu State”.

These victims had some ray of hope when a Congress government came to power in the centre. But even the Congress government of Prime Minister Manmohan Singh did not give the Muslims any relief. Instead hailed Modi’s Gujarat as the best governed and most business friendly state in India.

With the social and economic boycott imposed on them, Muslims did not know where to turn to as they were abandoned by almost everyone in the world’s largest and secular democracy. 4th March 2002.

Twenty years later today thousands of victims  await justice while perpetrators roam around free. Muslims expected that  Narendra Modi, accused of being the main architect of this carnage, will be brought to justice.  That never happened.

Instead Narendra Modi was elected Prime Minister of India and had been carrying out the very same hostile campaign against Muslims in India .  His anti Muslim campaign continues unabated  destabilizing the country and the latest being the Hijab crisis triggered by preventing Muslims girls in Hijab attending schools and collges 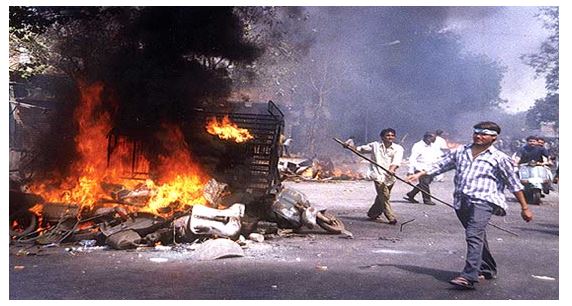 Genocide of Muslims in Gujarat - Views expressed by writers in this section are their own and do not necessarily reflect Latheefarook.com point-of-view