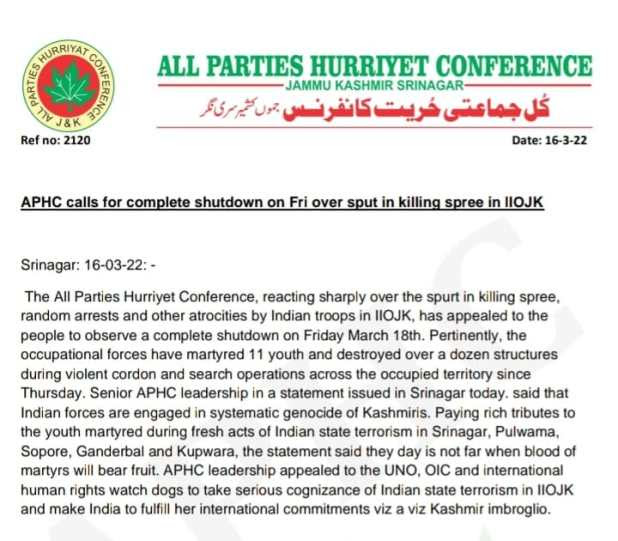 In Indian illegally occupied Jammu and Kashmir, complete shutdown will be observed, tomorrow (Friday), against the surge in killings, random arrests and other human rights violations by Indian troops in the territory.

Call for the strike has been given by the All Parties Hurriyat Conference leadership. The APHC in a statement issued in Srinagar strongly denounced the killing of 11 innocent youth in a week time in the occupied territory and said that the Indian forces’ personnel were engaged in systematic genocide of the Kashmiris.

Pertinently, the occupational forces have martyred 11 youth and destroyed over a dozen structures in violent cordon and search operations across the occupied territory since last Thursday.

Paying glowing tributes to the youth martyred during the fresh acts of Indian state terrorism in Srinagar, Pulwama, Ganderbal and Kupwara, the statement said the day is not far when the blood of Kashmiri martyrs will bear fruit.

The leadership appealed to the UN, OIC and world human rights watchdogs to take serious cognizance of the Indian state terrorism in territory and compel India to fulfill her international commitments vis-a-vis the Kashmir imbroglio.

Disclaimer: Complete shutdown to be observed in IIOJK tomorrow against ongoing genocide - Views expressed by writers in this section are their own and do not necessarily reflect Latheefarook.com point-of-view