Srinagar, January 04 (KMS): In Indian illegally occupied Jammu and Kashmir, posters have appeared in Srinagar and other areas appealing the United Nations to resolve the Kashmir dispute as per its resolution passed on 5 January 1949.

The posters were displayed by pro-freedom organizations including Tehreek-e-Azaadi Jammu Kashmir, Students and Youth Forum and Jammu and Kashmir Freedom Movement in Srinagar and other areas. They asked the world body to take notice of violation of Kashmiris right to self-determination, recongnized by the UN Security Council resolution passed on January 5, 1949.

It was on January 5, 1949 when the United Nations Security Council (UNSC) passed a resolution supporting the Kashmiris’ right to decide their future by themselves through a UN-sponsored plebiscite. The posters reminded the UN that it must implement its relevant resolutions to settle the Kashmir dispute. 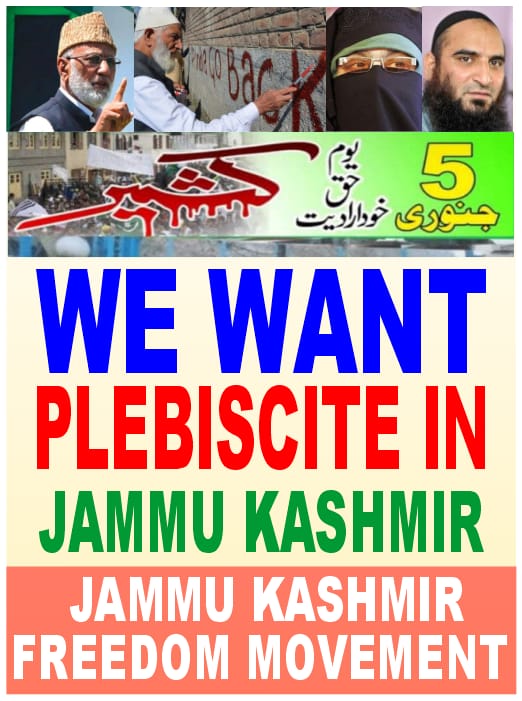 The posters calling upon the United Nations to honor its commitments made 73 years ago said the Right to Self-Determination Day was a reminder to the global community that they could not shy away from their responsibility towards the Kashmiri people.

The posters said the Modi-led fascist Indian regime is changing the demography of Muslim majority IIOJK by different tactics and is misleading the international community about the actual ground situation of the territory.

Disclaimer: Posters appear in Srinagar demanding Kashmiris’ right to self-determination - Views expressed by writers in this section are their own and do not necessarily reflect Latheefarook.com point-of-view