Sabiya Saifi is a 21 year old Muslim girl from Sangam Vihar, New Delhi. For the past four months she was employed as a civil defense officer in New Delhi- at the office of Lajpat Nagar District Magistrate. On 26 August she was kidnapped, raped, gang raped and brutally massacred.

According to meagre reports emerging she was gang raped by four and tortured before killing her in one of the most gruesome manners at Haryana’s Faridabad .The barbarity perpetrated was such that the culprits  mutilated her private parts and chopped and taken out her two breasts. She was cut more than 50 times in different parts of her body and the knife used to cut her mouth has come out of her throat.

Sabiya’s family members had stated that her neck was slit and private parts were mutilated. There were several cut marks across her body.

This happened in India, the largest democracy in the world, ruled by the RSS front Bharatiya Janata Party of Prime Minister Narendra Modi who was accused of committing genocide of Muslims in Gujarat in February 2002 and was declared persona non grata by the United States, Europe and many other countries. He still continues his conspiracies against the Indian Muslims.

This was absolute disgrace to peace loving Hindus practicing Hinduism of Vedas and not follow the Hindutva of BJP whose only agenda has been to unleash violence against Muslims   , destroy their residential and business properties, turned them paupers and reduce them to non-entities while promoting Brahmins in the government and private sectors and ensure scheduled caste Hindus, Dalit, remain downtrodden.

Under the circumstance India doesn’t need enemies as BJP is doing an excellent job dividing communities and destroying of the country within. According to the Delhi Police News Sabiya Saifi was Kidnapped in September 2021 by unidentified persons and her body was dumped after being gang-raped and murdered.

Family members accused the police of using an unknown fellow as her husband from a secret marriage of committing the crime in their effort to cover up the case as they had done in many such cases. According to Sabiya’s cousin Monis Saifi, the police are not helping the family and no one from the DM’s office have visited them so far.

Family members also accused the Police of not cooperating to establish the truth. Muslims in India cannot expect fair and justice under Prime minister Modi  and his Interior Minister Amith Shah whose police turned a blind when the government sponsored Dalit thugs  unleashed unprecedented  violence against New Delhi Muslims in February last year. They not only killed them but also burnt their residential and commercial reducing them into paupers overnight.

The family suspect functionaries of the Lajpat Nagar District Magistrate office may be involved in her murder because she was aware of corrupt activities being done at the premises.

Her father Samid Ahmad said that Rabiya had told him and her mother about a secret lock-up inside the DM office, where crores of rupees were kept. She had said that 3-4 lakh rupees used to come every day [allegedly through corrupt means].

The conduct of the police in connection with this case has also strengthened their doubt. Commenting on the surrendered man’s murder confession, Monis said,”This is a conspiracy to defame her and give a different angle to the case.”

Meanwhile upto  date  the mainstream Indian media, busy demonizing Taliban, refused to highlight this savagery. It ws virtually dismissed .Perhaps order from top not to give publicity as Modi government exercise control over media.  Only small time media outlets reported the barbarity in the land where the father of the nation Mahatma Gandhi once said that “India will really be free only when women were safe and freely”. Unfortunately for Muslims and even for India today’s India is not Mahathma Gandhi’s’ India. It is the India of those who killed Gandhi. 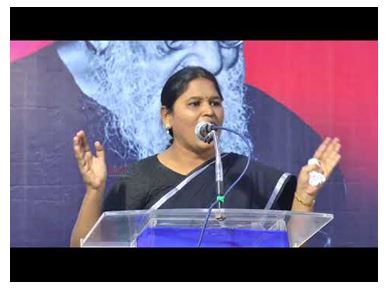 Muslims all over India began protesting against the killing seeking justice. In the south there was widespread condemnation and street protests seeking justice for Sabiya. Foremost among them was popular social activist and   popular politician   Sabarimla Jayakanthan teacher who vehemently condemned the barbarity and vowed to take up the issue in a bigger scale. Sabarimala who struggle for communal harmony and peace also conducts a daily video program under the title “Daily a story from the Holy Quran “. Ends

Twitterati, however, believe there is much more to this murder case and that the accused in custody must be questioned and the root cause of the matter must be found out behind this barbaric incident.

Socio-political activists from across the country have been tweeting about the issue asking the authorities to investigate further into the matter and find the real culprit behind the murder. People ,mainly Hindus, put the blame on the Modi government for its failure to  maintain law and order and ensure safety for Muslims but also suggested to trace the perpetrators and enforce death penalty on them as deterrence.

Disclaimer: Brutal killing of a Muslim girl- A defense officer -in New Delhi By Latheef Farook - Views expressed by writers in this section are their own and do not necessarily reflect Latheefarook.com point-of-view