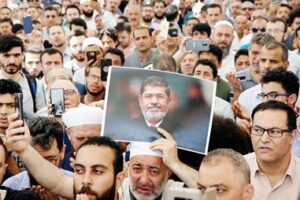 Egyptians of all walks of life and from all over the country have taken to streets, since 20 September 2020, demanding the resignation of President Abdul Fattah Sisi despite the fear that participating in demonstrations means imprisonment or death.

Sisi was installed in power on July 2013 in a military coup after overthrowing the first ever elected president Mohamed Morsi in a free and fair elections in more than sixty years. Within twenty four hours the armed forces reestablished their police state.

President Morsy was the hope of the people. His removal dashed all hopes of freedom in Egypt and beyond. The army began arresting and locking up hundreds of Muslim Brotherhood members including its leadership which supported Morsi.  Seven years of Sisi’s military rule was marked by rape, repression, fear and systematic torture of political prisoners, extrajudicial killings and the demolition of homes .There was fear everywhere. It was under such circumstance that people came out on street demonstrations after actor and contractor Mohamed Ali, in exile in Spain, called on them to protest.

Morsy belonged to Islamic Brotherhood which the US-Europe, Israel, Saudi and Gulf states fear.They plotted to overthrow Morsy and crush the rise of Islam to the benefit of their Israel. European and Israeli plotters handed over the job of overthrowing Morsy to their client states Saudi Arabia, United Arab Emirates and Kuwait.

The demonstrations against Morsi’s government were organized and orchestrated by the armed forces. Israel and America poured billions of dollars to ensure its success. Saudi Arabia, United Arab Emirates and Kuwait alone spent eleven billion dollars to create artificial shortage of food, fuel and other items to create unrest.

Oil sheikhs have created the situation where they need to listen to the dictates of US, Europe and Israel against their own people to protect their power and stolen wealth invested in US and Europe.

Saudi Arabia, the most oppressive regime in this planet and often known as the American –Zionist wolf in Islamic clothing, was all out to destroy Morsy’ government as it was both democratic and Islamic oriented.
Thus they have opened the gates of hell for them.

Muslims worldwide were shocked at the Saudi involvement in overthrowing the Islamic government in Egypt.
Ousted president Morsy was arrested and placed in solitary confinement for 23 hours a day. He was not allowed to see other prisoners, even during the one hour a day he was permitted to do exercise.”

“He was forced to sleep on a concrete floor with only one or two blankets for protection. He was given rotten tin food. He was not allowed access to books, journals, writing materials or a radio”, the independent rights experts detailed in an “official communication” to the Government.

Morsy was suffering from chronic diabetes as a result of the conditions his detention and denial of basic treatment, which led to serious medical complications.

Morsy collapsed in court on the 17th June 2019. His death was the result of the inhuman and degrading treatment during a lengthy and cruel period of detention since the 2013 military coup .He was subjected to lengthy periods of incommunicado.

The Morsi family members were subjected to harassment and political retaliation. Osama Morsi remains arbitrarily detained and has not been seen by the family since he attended his brother Abdullah’s secret burial. Abdullah – the youngest son – died in mysterious circumstances less than 3 months after his father’s death. Other family members continue to face daily state-backed harassment.

According to United Nations Special Rapporteur on Extrajudicial, Summary or Arbitrary Executions, Dr. Agnes Callemard, his death “could amount to a State-sanctioned arbitrary killing”. UN human rights experts have further stated that President Sisi’s prison regime may be putting thousands more lives at risk, intentionally violating prisoner’s rights as part of a strategy to silence opposition.

Morsi was buried in the early hours. Only Morsi’s direct family and his lawyer, Abdel Moneim Abdel Maqsoud, were allowed to attend the funeral. Funeral prayer was conducted at the ‘Turra’ Prison Hospital by only his family members. No media coverage of the funeral processions was permitted by the coup regime, nor were any of his supporters allowed to participate. Morsi was buried in Nasr City, in precisely the same burial ground as three former General Guides to the Muslim Brotherhood including the previous General Guide, Mohammad Mahdi, who also died in detention.

It was under such circumstance come street protests. The outcome will decide the fate of Middle East as Egypt remains key to peace and war in the region. 30 September 2020.

Disclaimer: Country wide protests to remove President Sisi By Latheef Farook - Views expressed by writers in this section are their own and do not necessarily reflect Latheefarook.com point-of-view