Skip to content
France
Spread the love
People gather during a commemoration ceremony on the Saint-Michel Bridge, to commemorate the victims of the 17 October 1961 massacre, in Paris on October 17, 2016 [Mustafa Sevgi/Anadolu Agency]

France’s Donald Trump wannabe is leading the country’s Islamophobic charge by promising to ban children from being named Muhammad if he becomes president. The meteoric rise of Eric Zemmour in the polls has sent alarm bells ringing among the country’s five million Muslims as they prepare to mark one of the darkest events in their community history.

Few had heard of Zemmour until last month but, just like Trump, the use of inflammatory, racist and Islamophobic language targeting immigrants, Muslims and other minorities is proving to be a vote winner among French voters who will choose their next president in April next year. If no candidate wins an outright majority in the first round, a run-off will be held. Political analysts are now wondering if Zemmour will be in the run-off after jumping to fourth place in the polls, with a predicted 13 per cent of the votes. The arrival of the 63 year old on what is a volatile political landscape will be seen by some Muslims as proof that living in France is going to get much worse for them.

Exploiting the notion that Islamism simply means extremism and terrorism, Zemmour promotes the idea that Muslims and their religion are the problem in France. “There is no difference between Islam and Islamism,” he told RTL, a French radio station that broadcasts across Europe.

The growing popularity of the far-right politician, author and TV commentator is bad news for French Muslims who are still reeling from the closure of their biggest charity and a leading anti-racist organisation. Zemmour’s ascendancy coincides with a court decision to rubber-stamp the French government’s move to shut down BarakaCity, the largest Muslim charity in the country, and the Collective against Islamophobia in France (CCIF).

READ: The curse of French colonisation of Algeria is chasing Macron

Seizing on anti-Muslim sentiment, Interior Minister Gérald Darmanin had blamed the two organisations for “inciting hatred” and spreading “Islamist propaganda” in the wake of the brutal killing of Samuel Paty in October last year, with which neither organisation had any connection. The 47 year old was beheaded outside the Bois d’Aulne secondary school near Paris. He had been teaching students about freedom of expression and blasphemy, which led to complaints and an online campaign against him. It emerged later that a 13-year-old truant had lied about the history teacher’s lesson and confessed that it was her lies that sparked the online hate campaign that led to his murder. Nevertheless, the incident presented Darmanin with a perfect opportunity to exploit French Islamophobia.

Muslims in France are subjected constantly to negative media scrutiny, with state institutions right up to the president’s office being used to target Islam. Thanks to Zemmour, it looks set to get much worse. The French media seems more than happy to pick up and amplify his hateful rhetoric.

Just like the zealous voters who swept Trump into power in America, Zemmour’s French supporters say that he is simply speaking the truth, and saying things that would not normally be said because of politically correct self-censorship. During a televised debate last month he pledged to prevent children from being named Muhammed by their parents if he becomes Monsieur le Président. 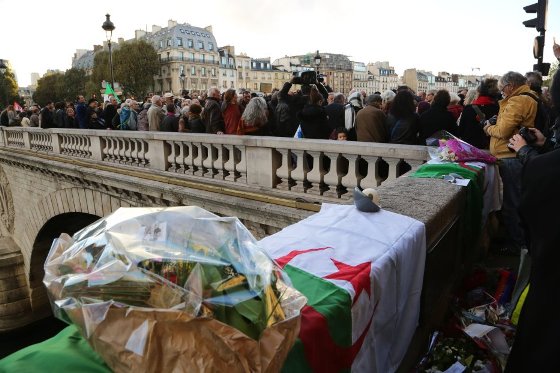 People gather during a commemoration ceremony on the Saint-Michel Bridge, near a plaque commemorating the victims of the 17 October 1961 massacre, in Paris, France on October 17, 2016. [Mustafa Sevgi – Anadolu Agency]

The French TV channels giving him the oxygen of publicity include CNews, which is financed by right-wing billionaire Vincent Bollore. In under four years, CNews has doubled its audience share and Zemmour has been credited with much of the channel’s success. His debate show “Face à L’Info” attracts an audience of almost one million per episode.

Zemmour’s media celebrity does not seem to have been affected by his convictions for racial or religious provocation. Moreover, his continued rise in the polls has coincided with the falling popularity of traditional far-right leader Marine Le Pen, who until last month was holding her own against President Emmanuel Macron at around 25 per cent. Her ratings have since dipped to 17 per cent.

Extreme right-wing views are now mainstream on French TV, so there is little wonder that despair among the nation’s Muslims is growing. It wasn’t helped a few days ago when the Macron blamed Algerians for their deep-rooted hatred of France by claiming that they had falsified the history of the French colonial era. In other words, he did not want to confront French atrocities committed against Algerians throughout the 132-year occupation.

This despair is also reflected in the sharp rise in anti-Muslim offences last year during the ongoing pandemic. Details are provided in the 30th Annual Report of the National Consultative Commission on Human Rights (CNCDH) on the fight against racism, anti-Semitism and xenophobia, released last month. Muslims continue to be a target of French intolerance.

The resultant attacks on the Muslim community are nothing new. In fact, Muslims living in France have endured far worse. Next Sunday, for example, will be the 60th anniversary of a massacre of hundreds of Algerians in Paris.

When Muslims took to the streets in 1961 to protest against a controversial government-imposed curfew, the response from the police was brutal. Hundreds were beaten to death and their bodies were thrown into the River Seine. Many historians, writers, and journalists have written about this massacre, but the authorities still do not recognise it as such. Police chief Maurice Papon was the head of the police force in Paris from 1958 to 1966. Although he escaped prosecution for the massacre, in 1983 he was charged with crimes against mankind when it emerged that he helped to supervise the deportation of French Jews to Germany in 1942, while serving the Vichy Government during World War II. The issue of the Paris Massacre was raised during his trial, but the atrocity which happened under his leadership was disregarded.

French racism towards Muslims is akin to the treatment of Black Americans from the 1960s to this day, but while the Black Lives Matter campaign has resonated in France, Macron and his fellow citizens are blind to their own appalling treatment of Muslims. Black Americans have gone through slavery and segregation; French Muslims have faced colonisation and slavery, and now face overt, institutional racism. The latter exposes the fact that France is determined to colonise and control their faith, with mosques and Muslim schools being closed by the authorities; imams losing their jobs; and Muslim charities shut down.

As the anniversary of the 17 October 1961 massacre approaches, we still don’t know the exact number of Algerians who were killed on that fateful day. Some say 200, while others put it at three times that number. What we do know is that France would rather forget what happened in the centre of the French capital sixty years ago. The first commemoration of the massacre wasn’t held until October 1997 and it took another four years, on the 40th anniversary, for an official plaque to be unveiled at Pont Saint-Michel.

Throughout its 132 years as the colonial power in Algeria, France was responsible for systematic ethnic cleansing and what are now known as war crimes. As many as 10 million Algerians were killed during that time. That is the reality of French colonialism, so why is Emmanuel Macron in any doubt about why the people of Algeria have such hatred for France? Instead of allowing hatred of all things Islam and Muslims to spiral out of control in his country, he and his fellow French citizens need to confront their blood-soaked relationship with Algeria and its people as a matter of urgency. The French president could show real leadership and start this process with an official memorial service for the Paris Massacre, with a presidential apology thrown in for good measure.

Disclaimer: Sixty years after the Paris Massacre, will the French finally accept that Muslim Lives Matter? by Yvonne Ridley - Views expressed by writers in this section are their own and do not necessarily reflect Latheefarook.com point-of-view