General Colin Powell, American secretary of state and chairman of the Joint Chiefs of Staff, died on Monday 18 October 2021. There were outpourings of sympathy and praise from war mongering politicians while independent columnists described him as a   “war criminal” for his role in the 2003 US led invasion   of Iraq and the slaughter of millions of Iraqis.

This was absolute lie. A lie cost many million innocent Iraqi lives, displacement of many more millions and destruction of Iraq as a whole.

Powell agreed to support the president and fabricated “evidence”. He   ignored repeated warnings that what he was saying was false. He went before the U.N. Security Council, at a moment of great international skepticism, and presented false evidence that Iraq had concealed an ongoing weapons development program. 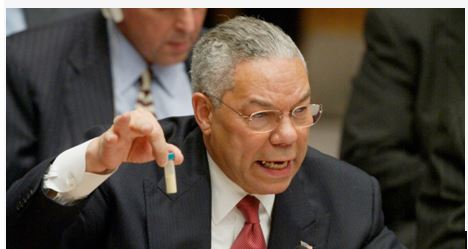 Secretary of State Colin Powell testifying before the UN’s Security Council on Feb. 5, 2003, presenting what turned out to be false claims about Iraq’s WMD. (U.N. Photo)

Admitting his mistake a year later Powell resigned as the secretary of state.

The UN secretary general Kofi Annan called the war on Iraq illegal.  Many international law experts agreed with Annan. This makes the Bush White House a gang of war criminals in a very precise sense.

There were passionate pleas from political and religious leaders, including the   Pope, against the war. Political activists, intellectuals and men and women from all walks of life, from Sydney, Melbourne and Jakarta to London, Paris. Berlin, Rome and cities all over the US, came out in their thousands in the shivering cold to demonstrate their opposition to the war.

Renowned international legal expert Late C. G. Weeramantry, former Vice President of the International Court of Justice, said “the Anglo-American alliance dragged their troops to the borders of Iraq without the moral, legal and factual evidence and took the illegal road to Baghdad carrying the Biblical curse of the sins of the father on his back”.

Dismissing all voices of reason, Bush dispatched troops and war planes to indiscriminately bomb  Iraqi cities with unprecedented intensity.  Within days, water and power supplies were cut off, and   millions of people were deprived of water, electricity, medicine, food and even shelter.   US planes continued to rain death on the Iraqi people.

Imagine the terrifying plight for the ordinary Iraqi citizens. Day in and day out the skies over Iraq rained bombs – and the most pernicious ones to boot – which shook the earth and relegated once thriving cities into bloody human abattoirs.

People who lived in stark fear had to scan the skies constantly in anticipation of the dreaded shriek of lethal shells whistling overhead and finally bursting around them in a mighty climatic boom. Several have seen their loved ones and neighbours blown to smithereens their homes which have served for many as instant concrete tombs.

There was carnage everywhere. And the whole world, including human rights champions in Europe, watched the slaughter as helpless spectators. Besides massacring innocent civilians, the US troops mercilessly slaughtered Iraqi soldiers who had surrendered and no one will know exactly how many Iraqis perished in this carnage.

Iraq, a land where many great ancient civilisations, including Mesopotamia, Sumer, Akkad, Babylonian and Assyria flourished between the Tigris and the Euphrates rivers for more than 7,000 years, was also raped of its precious heritage when its national museums and archives were robbed of their priceless relics and documents.

The destruction of Iraq had been so meticulously planned, embracing every aspect that one of their main aims was to physically eliminate academics, professionals and other intellectuals to wipe out the society for generations to come.

Under this program, hundreds of top Iraqi professionals, academics and other intellectuals were systematically killed. There were reports that Israel’s secret service Mossad arrived with a list of names and addresses of more than 400 top intellectuals and killed them in their houses, offices, cars along the streets and other places.

Around “84% of Iraq’s higher learning institutions have been burnt, looted or destroyed.” The thefts from the Iraqi Museum, the untrammelled looting of hundreds of archaeological sites and the burning of libraries placed Iraqi’s access to culture, history and science in grave danger. The assassinations and the flight of Iraqi professionals were the most criminal part of this process.

Shortly after the invasion, came the American Terror War gulag where appalling abuses were inflicted upon harmless citizens held in Iraq. Thousands of innocent Iraqi men, women and teenagers, were indiscriminately herded into prison camps and subjected to the most sadistic torture imaginable.

US forces used the most vicious interrogation techniques including hooding, stripping naked, subjecting   to extremes of heat, cold, noise and light, and depriving them of sleep.   This barbaric routine which included infliction of pain, discomfort, and humiliation was expanded in all too many cases into vicious beatings, sexual degradation, sodomy, electrocution, near drowning, and near asphyxiation. Thousands of detainees had died under questionable circumstances while in incarceration.

There were also pictures of female prisoners being forced to pose for indecent pictures besides reports of rape about which most victims were reluctant to talk   due to the devastating consequences on their lives in this conservative society. Yet the details were shocking.

Some detainees in US custody were rendered to oppressive regimes in Egypt, Jordan, Morocco, Tunisia, Libya, Uzbekistan and Syria among other countries where local police torture them, often with US interrogators present.

According to reports at Abu Ghraib, women were abused and tortured continuously. One woman was forced to walk on all fours and her knees and elbows were in a terrible state. Another woman had been forced to separate faeces from urine, using her bare hands. The soldiers frequently forced them to drink water from the toilet bowl. Sometimes they made a hundred or more prisoners lie on the ground and then trampled them underfoot.

Arab dictators were party to this crime. Tyrants like Egypt’s Hosni Mubarak and Syria’s Hafez Al Assad were bribed to support the war while oil sheiks in the gulf, depending on US for their survival, foot the bill. Saudi Arabia alone spent US Dollar 70 billion to help US led crusaders to turn a Muslim country into an abattoir.

This is the plight of the Muslim world. These are the very US-European politicians speak about freedom, Democracy and human rights. Ends

Holding a leash attached to a prisoner, known to the guards as “Gus”

A dog handler, uses a dog to scare a bound prisoner 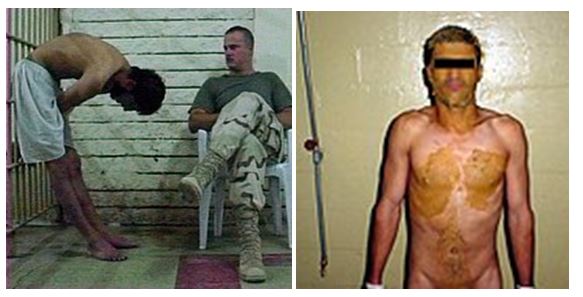 An Iraqi detainee with human excreta smeared on face and neck, chest and stomach 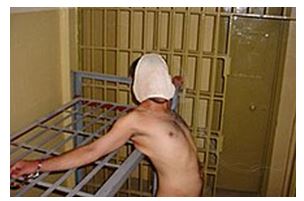 Helped Bush to turn Iraq into a slaughter house By Latheef Farook - Views expressed by writers in this section are their own and do not necessarily reflect Latheefarook.com point-of-view