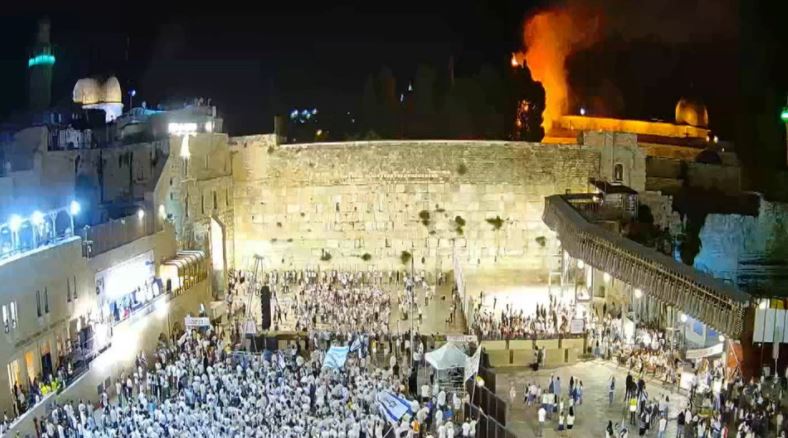 Israelis gather at the Western Wall as a blaze is seen in the background at the compound that houses al-Aqsa mosque in Jerusalem’s Old City, May 10, 2021. © Reuters / Reuters TV

Smoke rose above Jerusalem’s Temple Mount as a tree outside the Al Aqsa Mosque went up in flames on Monday. Meanwhile, Israeli police used flash-bangs to disperse a crowd of Palestinian worshippers on a major night of Ramadan.

The pillar of fire and a large plume of smoke were clearly visible atop the Temple Mount as night fell on Jerusalem.

Eyewitness footage from the scene showed a tree on fire just outside Al Aqsa, one of the three mosques on the plateau.

sraeli police also appeared to be dispersing a crowd of Palestinians assembled on the plateau, using shock grenades. According to the Red Crescent, over 334 Palestinians have been injured in Monday’s clashes.

Police said the fire at Al Aqsa was the result of “fireworks being fired at the Temple Mount plaza,” according to Israeli public broadcaster Kan. The mosque has not sustained any damage from the blaze, according to eyewitnesses.

Thousands of Israelis – barred from the Temple Mount on government orders – had gathered on the Western Wall plaza outside to celebrate Jerusalem Day. The public holiday, established in 1968, celebrates Jerusalem’s reunification under Israeli rule after the Six-Day War of 1967. Palestinian Muslims, meanwhile, marked the 27th night of Ramadan.

Disclaimer: FIRE erupts outside Al Aqsa mosque in Jerusalem amid clashes between Palestinian protesters and Israeli police - Views expressed by writers in this section are their own and do not necessarily reflect Latheefarook.com point-of-view