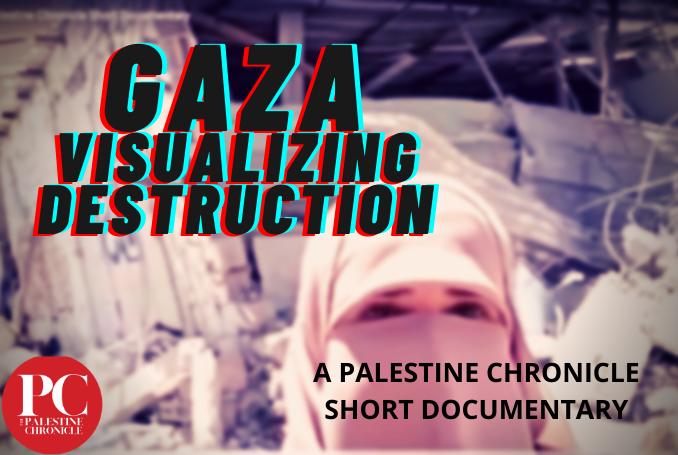 What does ‘toppled to the ground’ actually mean in real life? What happens to a neighborhood once a missile explodes and the bodies of dead and wounded are collected?

In this latest video production by The Palestine Chronicle team, we attempt to visualize destruction and locate the names of those who died in the homes and neighborhoods in which they once lived.

A Gaza-based Palestinian Journalist, Wafaa Aludaini takes us on this emotional but necessary journey throughout the war-torn Gaza Strip.

“Numbers without names, stats without faces and charts without the human being that gives them true meaning, are insufficient to tell the story of Palestine,” Palestinian journalist and editor of The Palestine Chronicle Ramzy Baroud said.

“At the Palestine Chronicle, we have always defied that norm, which plagues much of the media. The Palestinian people are not sound bites and are not faceless, passive victims. This short video is our attempt at helping our readers visualize Gaza, the destruction of the last Israeli war and the people who underwent that harrowing experience,” Baroud added.

“It is extremely important for the world to see how Gaza looks like right now, after the latest, bloody Israeli offensive. It is important to visually experience the destruction, to know that our attention towards Palestine cannot be limited to the days in which Israel bombards Gaza,” Romana Rubeo, managing editor of The Palestine Chronicle said.

“During the 11-day war, at The Palestine Chronicle, we tried to provide as much information as we could. I think that associating words with images is a powerful tool to keep attention high. For each child, for example, a home is a safe haven. Seeing how Israel turned these safe havens into heaps of rubble in a matter of seconds is as painful as it is necessary,” Rubeo added.