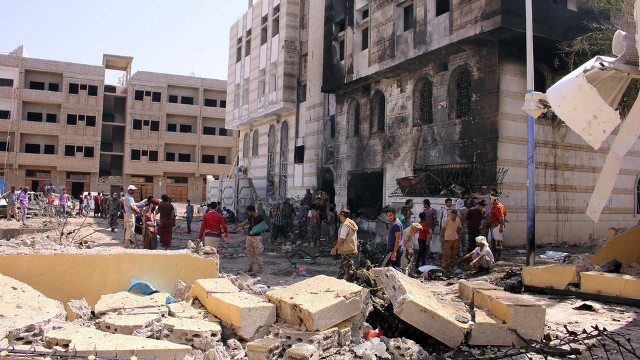 Does the British government’s cynicism know no end? Confirming multi-million pound aid packages for war-torn Yemen while facilitating attacks by the Saudis is treachery of the highest standard.

The British Foreign Secretary Dominic Raab’s announcement of a further £14 million in “aid” to famine-wracked, cholera-swept, devastated Yemen is surely the perfect example of ‘blood money’. The new tranche takes the total aid from the UK to the war-torn country since 2015 to over £1 billion – and £214 million of that has been in 2020 alone.

Milo, readers may recall, rented out his own US airplanes to the Germans to bomb his own men, his own positions. Well, rent is rent, and business is business after all.

In Raab’s case, while private British arms corporations reap billions in profits tooling up the obscurantist royal dictatorship in Saudi, he uses British taxpayers’ money to come to the “aid” of its victims in Yemen. Nice work if you can get it.

Of course, “aid” is a much-abused word. Many countries have discovered British aid – and NGO aid – ends up supporting them just as the rope supports the hanging man. A look at the Twitter timeline of the British ambassador to Yemen – funnily enough, ensconced for the duration in Riyadh – is to see what British ‘diplomacy’ has become. Gunboat diplomacy, without the gunboats to spare.

The British ambassador unleashes a ceaseless bombardment of enemy positions. His enemy, of course, being the very country to which he presented the Queen’s credentials. And from the very country doing the actual bombardment. With British bombs. Milo Minderbender would be proud.

But even if the British aid brings much-needed relief to the literally millions of under-nourished children – many of whom are starving to death due to the food blockade on the port of Aden imposed by Saudi Arabia and other Gulf states with full US and UK support – it will have saved the people only in order for them to be killed by British weapons, guided by British and American military staff officers seconded to the Saudis to assist in command and control cells.

Not a lot of British people know that. Still fewer know that Britain currently has troops on the Saudi-Yemen border, to ‘guard’ the Saudi royals from ‘Yemeni aggression’.

It’s like Hitler dropping food parcels on the East End of London during the Blitz. It is the deepest cynicism, even by British standards.

Yemen, of course, is a former British colony – not many places aren’t – and among the earliest memories in my anti-imperialist brain are the sights and sounds of Scottish soldiery in the colours of the Argyll and Sutherland Highlanders gunning down Arabs in the Crater district of Aden. This when The Beatles were top of the hit parade, as it was called then.

The ‘Rocks of Aden’ is one of my favourite bagpipe airs, even though the rocks of Aden were stained with blood. Then, as now. All Dominic Raab is doing is sending sticking plasters for the gaping wounds. And coffins for those who don’t make it through.

Perfidious Albion is us.

Disclaimer: George Galloway: Britain’s £1bn in “aid” to Yemen as it sells bombs to Saudi is the very definition of blood money - Views expressed by writers in this section are their own and do not necessarily reflect Latheefarook.com point-of-view