Skip to content
Israel
Spread the love
Palestinian farmers Ashraf and Abdelrahman el-Dor (L-R) on their land in Wadi al-Balat, between Nablus and Ramallah in the occupied West Bank, on 25 October 2021 (MEE/Shatha Hammad)
Palestinian olive farmers say attacks ‘under the watchful eye’ of the Israeli army have destroyed the otherwise festive harvest season

In the space of less than 10 days, Musleh Badawi and his family have been attacked three separate times by settlers while working on their land and picking olives.

This year’s harvest season, which runs between October and November, has been the hardest in recent memory for Badawi’s family, and other Palestinian families subjected to similar attacks.

The olive harvest is a lifeline for some 80,000 to 100,000 Palestinian families in the occupied West Bank.

“We were preparing for the olive harvest season as if it were a big celebration. But today’s events cast a dark shadow on the occasion, due to the settler attacks. If that wasn’t enough, we were also prevented from reaching our fields by the Israeli army,” Musleh Badawi told Middle East Eye on Sunday.

‘We were preparing for the olive harvest season as if it were a big celebration. But today’s events cast a dark shadow on the occasion, due to settler attacks’

Badawi mentions that during the first attack, on 29 October, the culprits were from the adjacent Esh Kodesh settlement. They came to the farmers’ lands and stole their harvesting equipment and four large sacks of olives that were estimated to contain 5000 shekels ($1,600) worth of olives. “We informed the Israeli police and the Israeli Coordination and Liaison Office, but they ignored our complaints when they confirmed that the settlers were the perpetrators of the theft.”

Badawi, 71, is a father of eight and a grandfather to 18, and his family depends on the olive trees as a primary source of income. Despite the repeated attacks they face, they haven’t left their land, and remain there constantly.

“On 5 November, we went to our other tract of land near the Elieh settlement, which has 50 olive trees,” he said. “We were surprised to see that the settlers had beat us to the land, and had already picked the trees. The Israeli army then arrived and kicked us out.”

Two days later, the family suffered a third attack while they were on their land, a tract of 10 dunams (one hectare) near the Hayovel outpost.

“Even though the area is considered Area B, the Israeli army still came and kicked us out, but only after we put up a fight – until they were able to make us leave by force,” Badawi said. He added that the repeated attacks on his family put them in constant fear of losing their land to colonisation, and being completely prevented from reaching their land in the coming years.

Area B, according to the Oslo Accords, is administered by both Israel and the Palestinian Authority, and has no Israeli settlements.

The Badawi family’s experience is familiar to scores of other Palestinian families during the olive harvest.

The UN Office for the Coordination of Humanitarian Affairs (OCHA), in its latest report covering the period 5-18 October, documented settlers’ actions, which included damaging over 1,600 trees (most of them olive trees) or stealing Palestinians’ harvest. These attacks took place in villages neighbouring the cities of Nablus, Hebron, Salfit, Ramallah and Jerusalem.

Bashar Qaryouti, an anti-settlement activist, told MEE that the Israeli Civil Administration has issued new maps that plan for the confiscation of more lands and prevent dozens of Palestinian families from reaching their lands – estimated to comprise thousands of dunams.

“What we’ve faced this year has been the most dangerous wave of attacks in years,” says Qaryouti. “It imposes a new status quo, especially in the middle region of the West Bank and Hebron.”

He added that the settler attacks escalated during the olive harvest season against villages south of Nablus specifically, including the theft of olives and equipment, attacks against families, the obstruction of Palestinians accessing their fields, and the uprooting of hundreds of olive trees. He told MEE that settlers have even planted sharp objects on the agricultural roads, damaging many Palestinian vehicles, to prevent them from reaching their lands.

“Most settler attacks were carried out under the watchful eye of the Israeli Civil Administration and the Israeli army, who were content to sit back and watch, or even to provide protection to the settlers,” Qaryouti added. 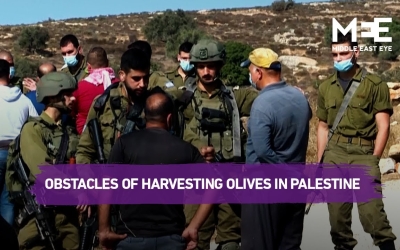 The obstacles Palestinian farmers face to harvest their olives

Shaher Muhammad Azem, 53, confirms the above, having been the victim of an attack on his land four years ago by a known settler. Shaher lodged several complaints against the settler, to no avail.

Shaher is from the village of Qaryout. The Elieh settlement surrounds his 11 dunams (1.1 hectares) of land, and the Israeli army prevents him from reaching it without prior permission. “When I arrived at my land, the settler [going by the name of] Koron told me in front of the army and the Civil Administration that he had picked all of my olive trees, and that nothing was left for me,” he said. His land houses 60 olive trees, and all have been illegally harvested through theft.

Shaher told MEE that the attacks come not only during the olive harvest: every time he goes to till his land, settlers plant sharp objects on the nearby roads, resulting in damage to his tractor.

Shaher’s family of 11 has not been spared the ramifications. “These attacks have destroyed me and my family,” he said. “We rely on the olive harvest, and we had big hopes for this season… but because of these attacks, I am unable to pay for my daughter’s university tuition, and she’s now halted her studies. We used to sell olives and olive oil, but today we buy it, and the settlers steal from our trees right in front of our eyes.

“Last year,” he continued, “the settlers stole our harvest, and only a single branch was left unpicked. The settler told me that he left this one olive branch for me, so that I could get a good look at how great those olives were, ‘So that you’ll get a heart attack and die.’” The settler, Koron, threatens him regularly, telling him, “I’m way above the police. You won’t be able to reach me with your complaints.”

Moayyad Besharat, Programs and Project Manager at the Union of Agricultural Work Committees, told MEE that on 13 October the union launched its annual campaign to assist Palestinian villagers whose lands are located in endangered areas, through the presence of international groups and volunteers during the harvest.

During the second half of October, he says, 95 settler attacks have been recorded in the villages of southern Nablus. “Settler attacks escalate throughout the olive picking season, with the objective of emptying the land of any Palestinian presence. Settlers were further provoked by the presence of dozens of Palestinians this year who came to assist the farmers and affirm their commitment to the land, which the settlers reject.” 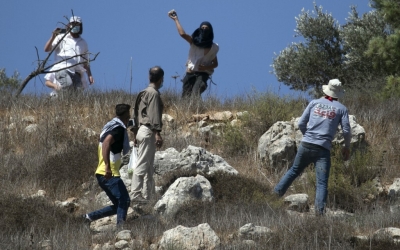 He added: “Despite our presence in large numbers in order to provide protection to the farmers, the settlers still launched widespread attacks, cutting trees, stealing harvests and tools, and harassing the villagers within eyeshot of the army and the Israeli Civil Administration. They paid no heed to the international organisations that were present.”

Moayyad affirmed that the settler attacks and army harassment have increased in general recently, and what was clear this time is that the attacks were in much larger numbers than before. The settlers were also accompanied by army escorts and they expelled dozens of families from their lands, despite the fact those families had obtained permits to be there from the Israeli Civil Administration.

According to UN data, almost half of Palestinian agricultural lands are planted with an estimated 10 million olive trees in the West Bank and besieged Gaza Strip.

The International Committee of the Red Cross said that more than 9,300 olive trees belonging to Palestinian farmers were damaged, cut or uprooted by Israeli settlers between August 2020 and August 2021.

Disclaimer: Israel: Settler attacks on Palestinian olive harvest 'most dangerous in years' By Shatha Hammad in Nablus, occupied Palestine - Views expressed by writers in this section are their own and do not necessarily reflect Latheefarook.com point-of-view