The suspected draft Agreement between Maldives and India was to develop the coast guard harbor of Maldives National Defense Force (MNDF) along with a dockyard upon completion of the project at a strategic location of Maldives UthuruThilaFalhu (UTF).

Maldives signed the USD 50 million credit line agreement for the defense project between the state of the Maldives and the Export and Import Bank of India on 21st February 2021 during the official visit of the external affairs Minister of India S.Jaishankar to the Maldives.

The agreement was signed by Defense Minister Mariya Ahmed Didi and Minister of External Affairs of India Dr. S.Jaishankar.

The suspected draft agreement emerged after Maldives Press made numerous allegations about the UTF agreement, claiming that the agreement is entangled with a threat to Maldives sovereignty.

Maldives Online media outlet published what it claimed in the copy of the draft agreement which reads the under the agreement it permitted the stationing of Indian Military personal at UTF. The news outlet declared that the alleged copy was provided by a senior officer of the MNDF on condition of anonymity. Former Home Minister Umar Naseer also shared screenshots of the agreement on his Facebook account, shortly after the news was publicized. 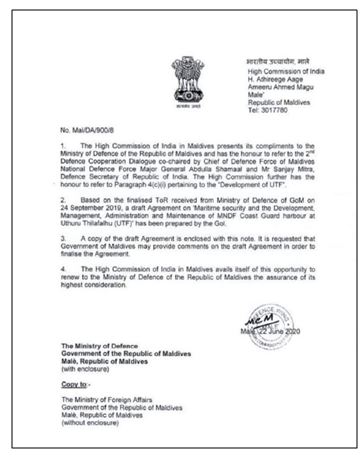 Maldivian government has to do damage control after the news outlet and an opposition politician leaked the suspected draft of the bilateral agreement with India on the development of a coast guard facility at a strategically located island UthuruThilaFalhu.

Maldivian military denounced the news report as fake. The defense ministry issued a press release that reads, it will not allow for any decision which may threaten the safety of the Maldivian people or the freedom and the sovereignty of the nation. MNDF also issued advisory asking citizens to refrain from circulating illegitimate documents that might hinder Maldives’ relationships with neighboring countries.

However, there was public uproar over the matter, with many calling for the agreement to be made public, or at the very least to a parliament committee, as required by the Maldivian constitution.Per the Maldivian constitution, a committee of the People’s Majilis shall be established to exercise continuing oversight of the operations of the security services. The committee shall include representation from all the different political parties within the People’s Majlis. 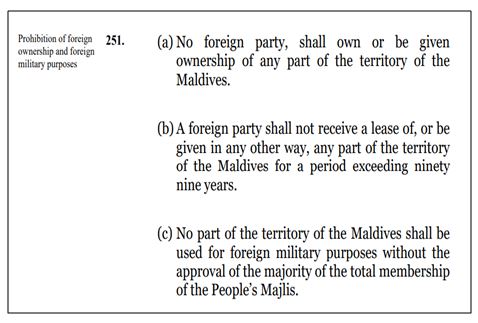 The public sentiments were expressed in social media calling the Indian Military out from the region. The citizens also staged various protests in the capital city, Male’ calling for the immediate removal of the Indian military personnel from the nation. They also urged the ruling party, MDP, which has a supermajority in parliament, to look into the matter to see if the agreement contains any provision that allows Indian Military personnel presence in the region. 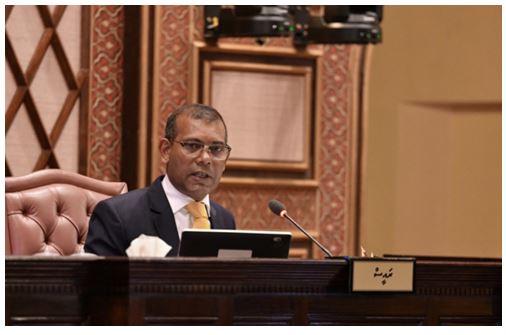 The motion submitted by opposition parliamentarian and former defense minister Adam Shareef Umar requesting that a copy of the agreement be submitted to the parliament’s 241 committee was also rejected, infringing on the MDP’s parliamentary supermajority.

The Maldives National Defense Force facilitated a press conference to address the agreement’s concerns as public discontent escalated and the government was harshly criticized. The press conference was attended by top MNDF officials and MNDF leadership members.

In response to press queries, Brigadier General Abdulla Shamaal said that the authority would not allow any media or person to distribute false information defaming the authority. He also claimed that the agreement was signed after consultations and after India was selected as the most appropriate party to build the planned coast guard harbor and dockyard. He also emphasized the importance of a coast guard harbor and a dockyard at UTF. 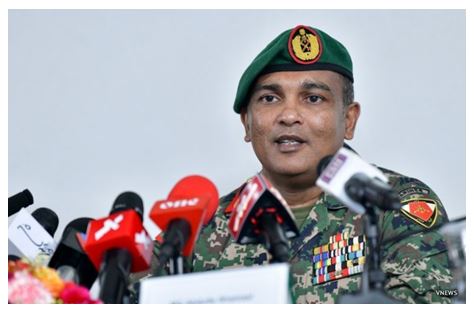 When asked about the agreement duration, Vice Chief of Defense Force Brigadier General Abdul Raheem Abdul Latheef stated that the development of the harbor and dockyard must be completed within three years. However, under the terms of the agreement, technical experts will be permitted to remain at the UTF for a maximum of 15 years. He did not, indeed, explain why the so-called “technical experts” were able to remain stationed for 15 years after the work is performed.

Brig. Gen. AbdurRaheem also declared that the same information was disclosed to the public before. Be that as it may it is worth noting that, Brig. Gen. Abdul Latheef had not said that the duration of the agreement was 15 years during the 21 February 2021 news conference that had been held after the signing of the UTF agreement. On that occasion, he had only said that development would take 3 years and that the Indians would stay for any period of time requested by the MNDF. 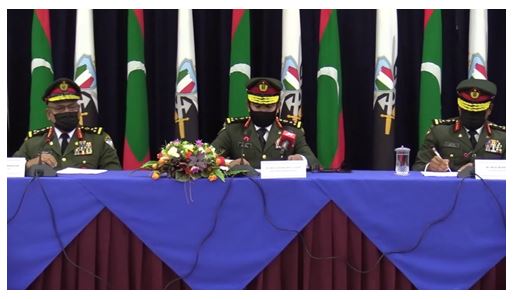 Additionally, Maldives Online Media Outlet “Dhiyares” had subsequently submitted a request to the Ministry of Defense through the Right to Information (RTI) Act that the agreement duration is disclosed. In response, the Ministry had written that they could not disclose that information as disclosing the duration of the agreement posed a risk to national security.

One of the main questions about the agreement is the diplomatic immunity granted to Indian personnel stationed in the region.As per the leaked document, the government of the Republic of Maldives agrees to extend full immunity to the personnel deputed by the government of the Republic of India, their papers, and their premises from local legal and judicial processes as being extended to another diplomatic personnel in the Maldives. According to the agreement they would be exempt from paying taxes, duties, customs during their stay in the Maldives as accords to the other diplomatic personnel.

When asked why technicians are granted diplomatic immunity for a term of 15 years, Major General Shamaal concluded his response by saying that granting diplomatic immunity to any foreign national is a sovereign right of the state. No further details were provided regarding their role at the UTF over such long period.

In addition, when asked whether the Maldivian government would have to pay any compensation if the contract was terminated before 15 years, the MNDF did not provide a clear response.

MNDF was heavily lambasted in the press for their role in defending the agreement reached between two nations. Many argued that information about the agreement should be presented by President Ibrahim Mohamed Solih, the Attorney General Ibrahim Riffath, and Defense Minister Maryia Didi. Many people claim that MNDF officials were politically influenced.

There were several accusations of taking bribes made against the Military Officials, Government Ministers, and heads of state institutions. A complaint was issued by an individual to the Anti-Corruption Commission (ACC) of Maldives to log the case. The complaint issued accused high-ranking officials of the Maldives National Defense Force (MNDF) of having taken large bribes from a foreign nation prior to the signing of the “Development, Support and the Maintenance of the Maldives National Defence Force HarborSifavaru At UthuruThilaFalhu” between the governments of the Maldives and India. 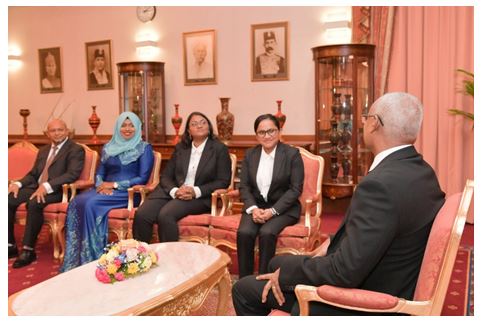 The complaint letter submitted to ACC stated that there were accusations that the standards of living enjoyed by certain high-ranking generals of the MNDF had improved unexpectedly. The letter had requested the Commission to investigate whatever enrichment that had come to the property of their wives, children, siblings, parents, uncles, and aunts within the past 12 months.

Despite serious allegations were made against the MNDF high-ranking officials, Anti-Corruption Commission without a second thought promptly announced their decisions to reject the case about USD 20 million in bribes having been taken by high officials of the Military, Government Ministers, and heads of state institutions. Sources also reported that a total of 20 million USD in bribes has been distributed to people in various positions in the government. The MNDF had denied that this claim was true during a press conference held on 16 March 2021. They had said that “a soldier would never do such a thing”.

As the government continues to fail to provide appropriate answers to the public on the issue, making the agreement even more suspicious, the citizens of the Maldives have continued to condemn the Indian military presence in the country. 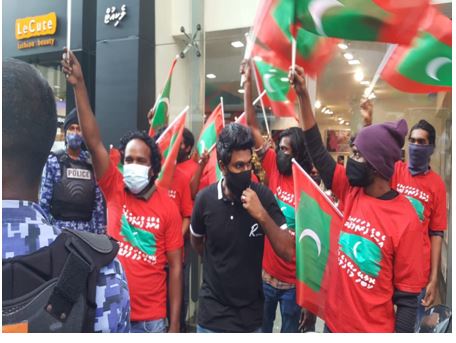 It seems that the public response as deep-seated nationalist sentiments which came from the fuels’ Maldivian identity, which is shaped by the centuries-old historical memories of invaders from the Indian mainland.

Several demonstrations were held in the capital city of Male’, with the slogan “No Boots on the Ground” and a call to remove the Indian military presence in the country. Thousands of people marched on the streets of the capital city, protesting the intervention of foreign military forces in the country. Several protests were held in front of the Foreign Ministry, followed by protests in front of the residence of the Indian Ambassador to the Maldives, Mr. Sanjay Sudheer. Many have even asked for the dismissal of Sanjay Sudheer. 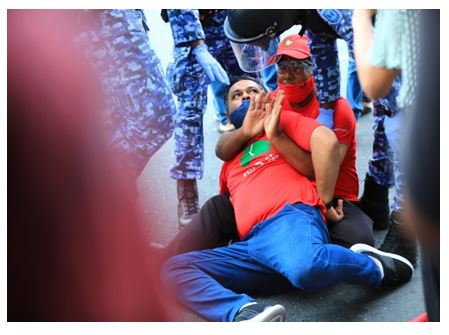 The Maldives Police Service used excessive force to disperse a number of protests staged by civilians. Many other female demonstrators were seen being manhandled by male police officers at the protests. The police used excessive force to disperse the opposition-fueled protesters every time. Maldives Police have used heavy amounts of pepper spray on citizens in order to control them and prevent them from exercising their universal right to free assembly and expression.

While the draft UTF agreement is being circulated, the government has entered into a number of other agreements with India, enabling Indian military presence in the region. Indian military troops are reportedly deployed in five positions in the Maldives. There have also been reports that the Indians are building a military base on the southern tip of the Maldives (Addu City).

The opposition has declared that the rumored draft agreement is accurate. They also claimed that India is weakening Solih’s regime because they have taken huge loans with high interest rates at a time when they do not have the means to repay them. Many have accused the ruling party, MDP, of voter fraud and of receiving assistance from Indian diplomats in order to secure the 2018 Presidential Election, which was preceded by the Parliamentary Election 2019.

The opposition has declared that today’s government decisions are heavily influenced and dominated by India.The opposition also blamed the Solih’s government over their inability to maintain balanced and stable liberal ties with the native nations.The publicis outraged with the government’s decisions to allow Indian military presence and their involvement in government endeavors. They have upheld their demands for the disclosure of the agreements between India and the Maldives.The people have stated that they would not allow any nation to violate the sovereignty of the Maldives. 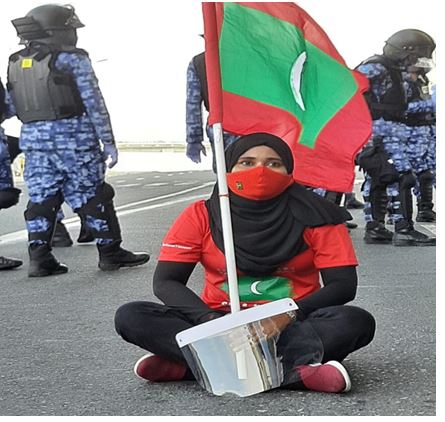 Disclaimer: Maldives call “No Boots on the ground” after a suspected draft agreement (UTF) between India and Maldives surfaced By Ahmed Azaan - Views expressed by writers in this section are their own and do not necessarily reflect Latheefarook.com point-of-view