What does Abdel Fattah el-Sisi want from the Egyptian people when he comes out with his lack of charisma, promising everyone that he would leave his position if the people ask him to do so?

It has occurred before, currently happening, and will also take place afterward as long as El-Sisi holds on to power, always keeps lying the same way he keeps breathing, deceiving public opinion and addressing the West with silly terms such as “Will you love our people more than us or what?”

“Leave, Sisi!” is not just a hashtag that millions of Egyptians around the world are tweeting to call on the worst General in the country’s history, in terms of human rights violations, to leave office and end his repressive policies against Egyptians, but rather it is a reflection of a painful reality that the Egyptian people, from all sects, suffer from under Sisi’s rule.

In early 2006, deposed Hosni Mubarak was celebrating with the Egyptian national football team by winning the Africa Cup of Nations in Cairo stadium; at the same time, hundreds of Egyptian families were mourning after losing their sons in the sinking of the MS Al-Salam Boccaccio. Mubarak then mocked this catastrophe with his famous phrase: “Is it a vessel from those that drown?”

OPINION: In Egypt, the regime exchanges citizenship for freedom

“The person who has left a successor behind him is not dead”, a famous Egyptian phrase that applies to the case of El-Sisi and Mubarak. The former director of military intelligence during Mubarak’s reign was speaking to us about his trillions that he spent since the January revolution until now. He was laughing, joking, and having fun by telling his silly jokes in a shot circulated in the media at the World Youth Forum. Meanwhile, more than nine children under the age of fifteen lost their lives after drowning in a boat in the Monsha’et El Kanater last week.

Children are drowning in Egypt while trying to earn a living. Meanwhile, El-Sisi says that no one from those who criticises the human rights situation in Egypt is concerned about the Egyptian people more than he is. The representative of the Union for the Mediterranean (UFM) confronted El-Sisi with the deteriorating conditions of the detainees in the Egyptian prisons, and the worsening conditions as a result of the coronavirus pandemic. When she asked him about the enforced disappearance practiced by the Egyptian authorities under his rule, El-Sisi became angry and described her words as harsh and contrary to the truth in Egypt.

The Monte Carlo Agency correspondent raises the reality of the complete deterioration of human rights records in Egypt and asks El-Sisi about the sharp increase in the number of detainees, despite the launch of the so-called human rights strategy. El-Sisi gets angry, saying the Egyptian people have nothing to eat, so is the Western world ready to help? 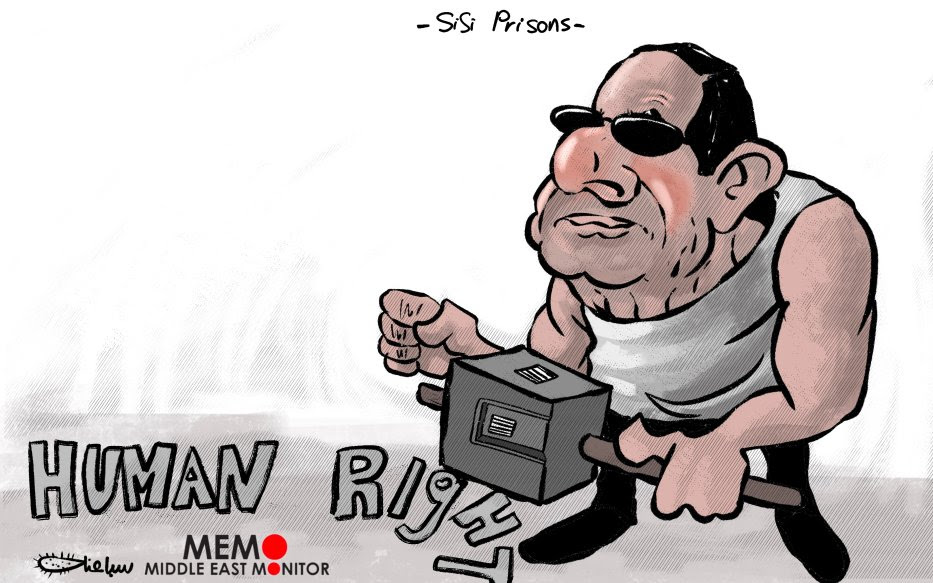 El-Sisi claims that he is ready to pave the way for Egyptians to demonstrate in the streets and squares every year, and agrees to hold presidential elections, so long as sufficient financial support is provided. He will succeed if he is honest, but he is a great liar. The international community should take control and put pressure on El-Sisi to do so in reality, to hold presidential elections under direct international supervision, without interference from the army, police, or Sisi’s intelligence services. So that the world will see the truth of the false popularity this dictator is promoting for himself, and knows his true value to the Egyptian people, in general.

OPINION: Ending state of emergency did not end systematic repression in Egypt

The man keeps lying the same way he keeps breathing. At the same time, he was responding to criticism from some participants at the World Youth Forum about human rights violations and talking about how he cares for his people, his security forces were arresting a young Egyptian opponent after a malicious security operation in which the Sudanese authorities and a private Sudanese airline were involved. Hossam Salam, a young Egyptian opponent who fled El-Sisi’s brutality five years ago and settled in Sudan, then decided to go to Turkey, but he was surprised as the plane taking him from Khartoum to Istanbul, changed its path after a false report and landed at Luxor airport, when he was arrested immediately. After that, the plane continued its flight to Turkey.

Prosecuting opponents abroad, killing or imprisoning them within, then coming out in a media shot like at the World Youth Forum, misleading and talking about respecting human rights, is a false policy of a military general who deserves nothing more than this phrase that millions tweeted: Leave, Sisi!

Disclaimer: Leave, Sisi! - Views expressed by writers in this section are their own and do not necessarily reflect Latheefarook.com point-of-view