Need to be implemented with or without ACJU which does not represent the community.

About fifty years ago when I started my journalistic career with the now defunct Sun newspaper the then Justice Minister K.W Devanayagam asked me; why are the Quazi Courts so corrupt?  Why don’t the community reform it to prevent divorces and misery to families?

I didn’t know what to say, but passed his concern to Abdur Razak Jamali, Mashood Alim and Noori Hazarath- all prominent members of All Ceylon Jamiyyathul Ulema-ACJU.

Fifty years later today where are we? The situation is worse manifold?

Realizing the need to review the Muslim personal law and reform the system of Quazi Courts, former Minister of Justice and Law Reform Milinda Moragoda appointed a committee chaired by Justice Saleem Marsoof in July 2009 to propose amendments to upgrade Quazi Courts. After dilly dallying for nine long years, due to ACJU manipulations as accused by many, Saleem Marsoof committee has submitted its report on 18 July 2018 to the government.

Now that the report was released isn’t it time for all including ACJU- to help implement its recommendations .Some suspect that this long delay on the part of the president and prime minister is due to ACJU opposition as they wrongly believe that the ACJU controls the Muslim vote banks.

The community has not given any mandate to ACJU which has arrogated itself the power to dictate terms to legal experts and intellectuals on a matter in which it has no monopoly of expertise?  According to reports the ACJU has strongly opposed any amendments to the Act stating that it is of divine origin and “perfect in the present state”.

Thus created dissent and division within the Committee. Under the circumstance, the community cannot expect ACJU, which has emerged as one man show of its controversial president, to help implement these recommendations.

However implementing these recommendations is essential in the interest of the community. So far, due to ignorance, he Muslim community has failed to give the rights and privileges given by Islam to women. Time has come for Muslim women too to play their role and make their contributions to families, community and the country, within the framework of Islam.

As it is now  MMDA is not strictly monitored by the State and therefore it is misused/misapplied  by ulemas  to make girls victims as they are given in ‘marriage’ easily to fun-seeking  foreign ( mostly from the Gulf) men mulch older and, in some cases  married to many others back in their  countries.

Educated and enlightened Muslim women are already demanding change and have organized into ‘silent’ agitation groups. They feel that they too have a right to play a significant role in decision making when it comes to their own life.  If Muslim women’s views are not respected and required changes to MMDA are not made they (Women) too are likely to show their displeasure at the next polls and, as the trend goes they cannot be dictated even by their husbands about how they will vote.

ACJU is only an association of those who have gone to Schools of Theology and therefore has no authority to speak for the entire community. It has no power to dictate to the women folk who are being enlightened in the electronic era.

The ACJU, formed in the mid 1920s when religious people, though not well known scholars, were respected due to their impeccable honesty, sincerity, integrity and piety.

The situation has changed today with moulvis blending business and religion   becoming pawns in the hands of many. On the other hand the ACJU was not given the right to represent the community and the enlightened elements in the community oppose many policies of ACJU.

The ACJU claims that it is an organization of ulemas- religious scholars. The question is most so called   ulemas   passed out from out dated madrasas remain unqualified to deal with burning current issues which strikes at the very root of the community’s existence.

I remember somewhere in 1970s respected Islamic scholar Dr M.A.M.Shukry spoke about Islam’s contribution to humanity during an iftar function in Colombo. The then Iraqi Ambassador Thowfeek Abdul Jabbar asked me about Dr Shukry. When I asked him why, the ambassador said “Dr Shukry spoke so well on Islam in fine classic Arabic which he, as an Arab, could not speak.

Now the question is why such eminent Islamic scholars have no place in the ACJU?

In fact he deserves to be ACJU president. The ACJU today, has become a liability on the community in view of its controversies and lost the confidence of most in the community.

For example deviating from the goals of founding fathers, ACJU politicized the organization pitting the community against the other communities.

The controversy over halal certificate business was exploited by anti-Muslim forces to unleash violent campaign pitting Sinhalese against Muslims. ACJU president’s visit to Geneva to defend the Rajapaksa government on the issue of war crimes against Tamils during the final stage of the war turned the Tamils against the Muslim community.

In 2013 more than 20 people including ulemas from the ACJU branch in Kinniya sighted the moon and tried to pass the message. However they failed to contact ACJU and forced the community to fast while people in and around Kinniya observed Eid Al Fitr. People in the east were so fed up that they decided to start their own ulema association.

Controversial statements such as describing face cover as compulsory in Islam without citing Holy Quran nor Hadees misled non-Muslims and harmed   the community.

Few years ago on the repeated advise and appeal of ulemas many Muslims invested  their hard earned millions in Ceylinco Finance Company which went bankrupt turning investors overnight into penniless. Is this the work of Ulemas?

Is this the work of ACJU? The list of wrong doings continue.

People were sick and tired of controversies. During last Eid al Fitr moon sighting controversy ACJU top official was escorted to his vehicle to prevent attack on him.

However the environment   in the ACJU is such that most ulemas were afraid to speak out as they fear serious repercussions.  They have families to support and can’t afford to lose their jobs. Their mouths are sealed with incentives and blackmail.

Thus the need of the hour is to thoroughly reorganize the ACJU to bring in non- controversial ulemas who are respected by the people.

This is essential because powerful destructive anti Muslims forces such as Israelis, Evangelical Christians and India’s RSS and VHP are here plotting against Muslims. Does the ACJU aware of these threats leave alone taking measures   to enlighten the people using at least Juma sermons and ensure the community’s safety

Ridiculous state of affairs of the politically bankrupt and sinking Muslim community is such that fourteen civil society organizations led by ACJU met President Maithripala Sirisena four days after violent attacks on Muslims in Digana and Akurana .Instead of showing the community’s anger the delegation thanked president Sirisena for working for communal harmony while Muslims whose houses were burnt to ashes and lost all their belongings due to  government’s failure to protect them were in tears in Akurana and other places with no cloth to change or no food to eat.

need to work to the welfare of community interests.  Often their actions only seem to be degrading rather than focusing on the cohesiveness of Islamic brotherhood.

Under the circumstance the only inevitable option is for independent religious scholars to come forward and help implement changes recommended in the Saleem Marsoof report.

Reiterating this columnist Ameer Faaiz had this to state in his article in the website Colombo Telegraph  that Reforms proposed in the Justice Marsoof’s Committee’s Report are within the limits of Islamic law (Shariah).

The diabolical actions of the ACJU are further highlighted by the fact that in 1951, its members, as the premier council of theologians, protested against the enactment of the Muslim Marriage and Divorce Act in the vicinity of the Old Parliament near Galle Face on the basis that they were not consulted despite repeated requests for hearing from the then Minister of Home Affairs. Blissfully forgetting that, now the very same pseudo Mullas or their offsprings are crying foul, falsely alleging that it is Shariah and thus cannot be amended.

Lies and abuse from the pulpits

The ACJU has unleashed their stalwarts to abuse and lie from the pulpits of mosques deriding anyone who did not agree with them in the Committee. They do this without explaining the recommendations and their justifications proposed by the Committee itself. Instead, the ACJU is abusing the Friday pulpits to incite people against reforms saying these would be in violation of Shariahlaw. Many of those who hear them proclaim this, have no way of knowing that they are being lied to.

The President, The Prime Minister and the Cabinet of Ministers must step in, act fast and give direction to reform this archaic and discriminatory legislation. Otherwise, they will be knowingly propping up a discriminatory structure that violates the spirit of the constitution and commit collective discrimination against the Muslim women of this country.

Disclaimer: Muslim Marriage and Divorce Act reforms By Latheef Farook - Views expressed by writers in this section are their own and do not necessarily reflect Latheefarook.com point-of-view 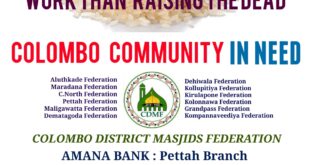 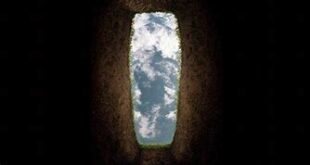 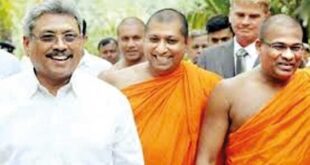 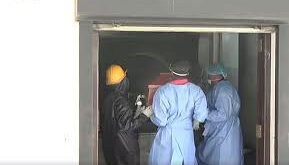