November 2 marks the 104th anniversary of Balfour Declaration of 2 November 1917 when Britain imperial power gave Palestine illegally and immorally to Jews who have not even seen Palestine to set up a Jewish racist state of Israel.

During the second half of 19th century the British Empire wanted to ensure the Middle East remains destabilized. At the same time that the Zionist Jews were planning to set up a separate Jewish state in Palestine where more than 97 percent of the population were Palestinian Arabs-both Muslims and Christians.

At the turn of the last century the entire Middle East was under Turkey’s Ottoman Empire. Britain and France defeated Ottoman Turks during World War 1 and brought under their control   and divided into different countries under Sykes Picot Agreement. Russia was in decline, but Britain and France got Russia involved.

Palestine was brought in 1917 under British Mandatory power which helped Zionists to create their state of Israel in Palestine.

As part of this conspiracy, on 2 November 1917 the British Foreign Secretary Arthur James Balfour,  wrote to Walter Rothschild, a leader of the British Zionist Jewish community, stating that: “His Majesty’s government view with favor  the establishment in Palestine of a national home for the Jewish people, and will use their best endeavors to facilitate the achievement of this object”

Balfour wrote a memorandum from the 1919 Paris Peace Conference declaring that: “The four Great Powers (Britain, France, United States and Soviet Union) are committed to Zionism.  And Zionism, be it right or wrong, good or bad, is rooted in age-long traditions, in present needs, in future hopes, of far profounder import than the desires and prejudices of the 700,000 Palestinian Arabs who now inhabit that ancient land”.

When Balfour signed the letter, neither he as Britain’s foreign minister, let alone King George V, had any sovereign right over Palestine to  offer Arab territory of Palestine to Zionists.

British kept the Arabs in dark of these secret negotiations with Zionists .The Arabs came to know of the Agreement only when the Russian Communists released its contents in the media- Izvestia

This agreement violated  assurances given by T E Lawrence ,British Army officer tasked with convincing the Arabs to fight against the Ottoman Empire promising Arabs freedom and their own rule after the war .

The Arabs trusted the British but were betrayed .The Arab reactions were fierce and desperate. There were serious outbreaks of violence in Syria, Palestine and Iraq

Britain allowed Zionists to bring in Jews from all over, settle them in Palestinian lands after kicking Palestinians out from their homes and lands into refugee camps. Migrant Jews were given weapons and military training while Palestinians were tied to lamp posts and killed for possessing a pen knife. Zionist Jews committed more than 90massacres of innocent Palestinians to  chase them away from their lands which were later taken by migrant Jews.

Once sufficient Jews were brought in, United States took up the issue in United Nations where countries were bribed and blackmailed to vote to partition Palestine to create Israel in 1948 in violation of all known laws, norms and cherished human values. 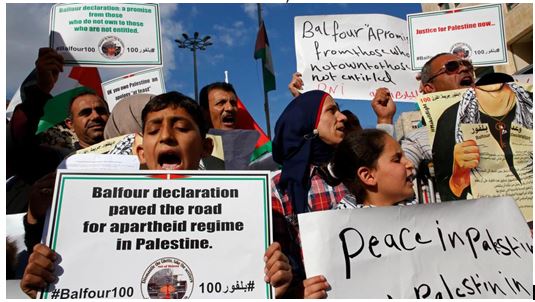 After 104 years since the British laid the “ground stone” for the Palestinian holocaust, the Palestinian resistance forces and the international solidarity movement continue to fight against Zionist colonial project and against the Jewish supremacy of “Israel”, which occupies Palestine and subjects its people to the horrors of war, colonization and displacement.

Palestinians continue their resistance struggle in line with the UN Charter and international law, which guarantee them the legitimate right of defense by all means. 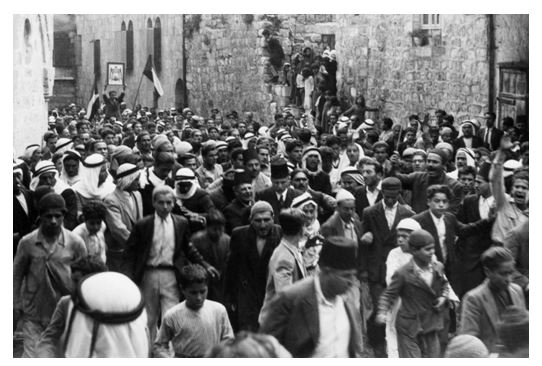 A picture dated before 1937 during the British Mandate in Palestine shows Arabs demonstrating in the Old City of Jerusalem against the European Jewish immigration to Columnist Naseem Enaizat stated that; Israel has not, even for a moment, stopped its racism and violence against the Palestinian people. Israel has committed all inhumane acts against the Palestinians, including killing, expulsion and displacement and inflicting destruction and devastation on everything on the land. Not even the trees, stones and Palestinian grave yards were spared from destruction. It commits terrorism in its worst forms.

This declaration is a painful memory for the Arab and Muslim nations and everyone who loves peace.

The world will not enjoy peace and stability without a just and comprehensive solution to the Palestinian issue, and without the Palestinian people obtaining their full rights by establishing their independent State, with Jerusalem as its capital and affirming their right to return and compensation.

Story of How Britain gave Palestine to Jews By Latheef Farook - Views expressed by writers in this section are their own and do not necessarily reflect Latheefarook.com point-of-view