Sometimes reality reveals itself in a few stark images.

Harun, a resident of Ar-Rakiz, who is paralysed after being shot by soldiers at point-blank range. Photo: Margaret Olin.

A while ago we were back in Ar-Rakiz, the village where Harun was shot by a soldier and nearly killed. He is paralysed from the neck down. The doctors recently had to amputate one leg because it got infected. His consciousness is, at best, murky. He hardly speaks anymore. The rest of his body is also covered with pressure ulcers. After many months in hospital, he now lives in his parents’ home, in a cave in the village. The parents are exhausted. There is no caretaker or helper, and of course, the army refused to take any responsibility for the shooting, so there has been no compensation.

Harun is Palestinian and doesn’t count.

The soldier who shot him was sent to Ar-Rakiz, along with several others, by Israeli settlers. 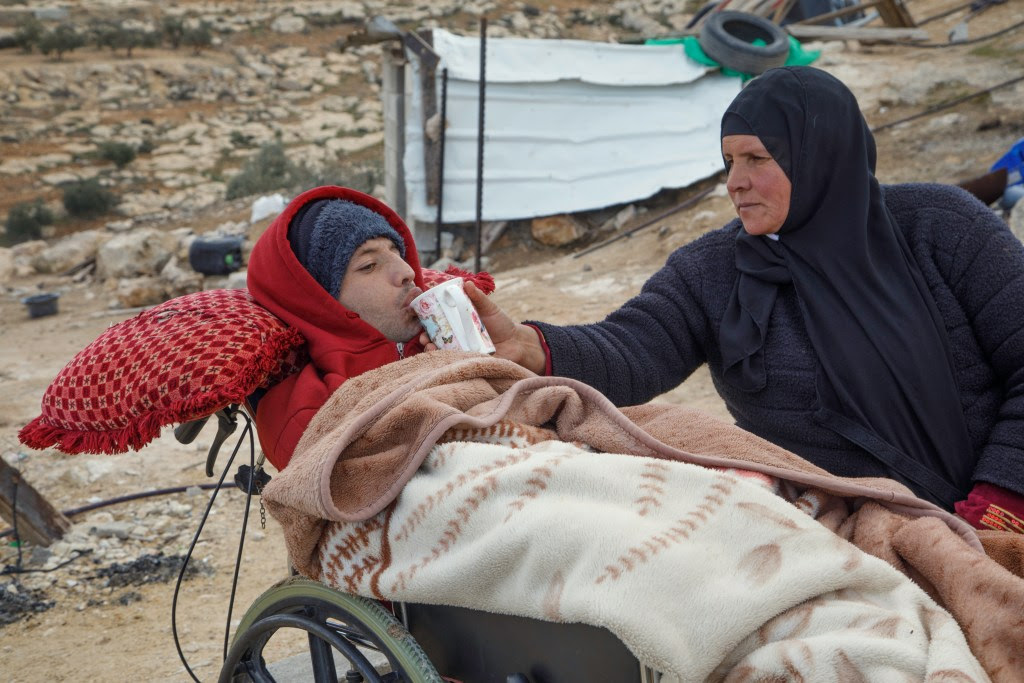 Harun and his mother Farsi in January.

We know Harun and the family and Ar-Rakiz. Since our visit in January, when Harun was brought to Ar-Rakiz from the room in Yata where he was receiving basic care, his condition has deteriorated markedly. At that time it was still possible to communicate with him in a limited way. Now it’s almost impossible.

We came this time, as before, to be with him and his parents, to offer whatever words of comfort we could muster. We embraced Rasmi, Harun’s father. Then the soldiers came. 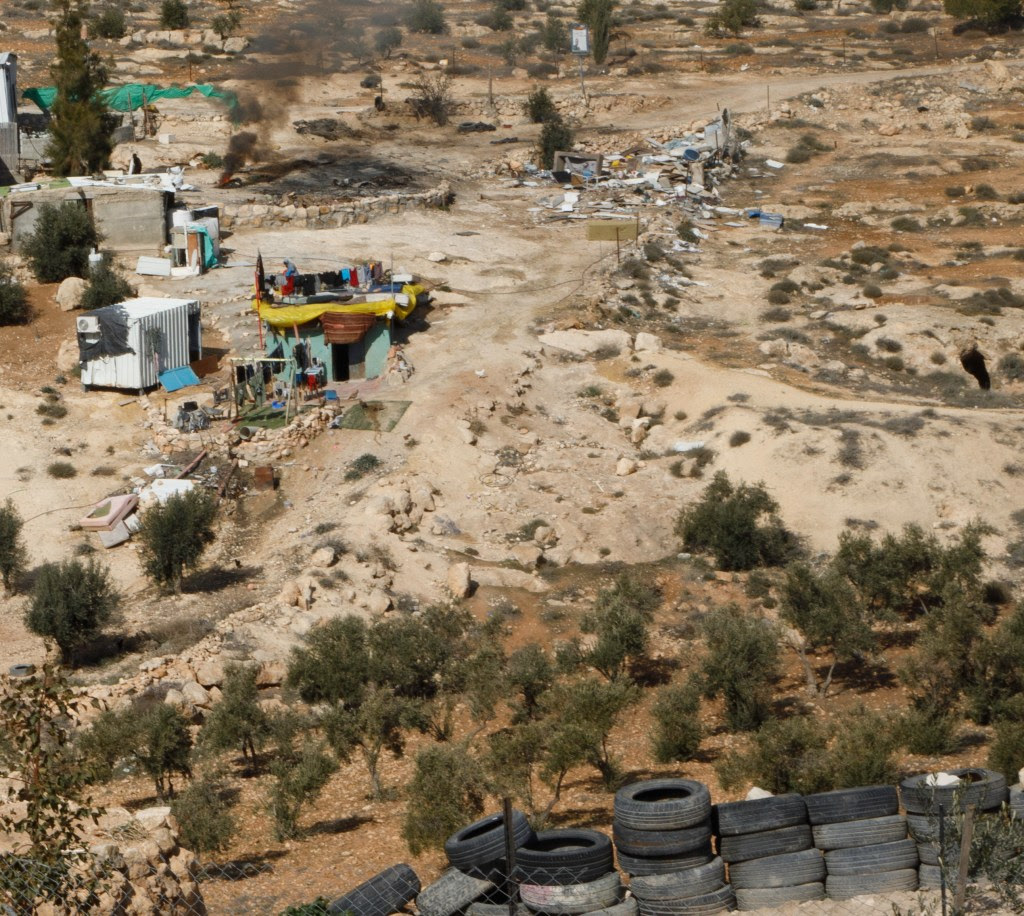 The neighborhood of Ar Rakiz in January.

Ar-Rakiz sits on a steep hill overlooking a rocky wadi. One reaches it from above the homes. As you walk downhill to the cave, you pass the ruins of several houses demolished by the army. 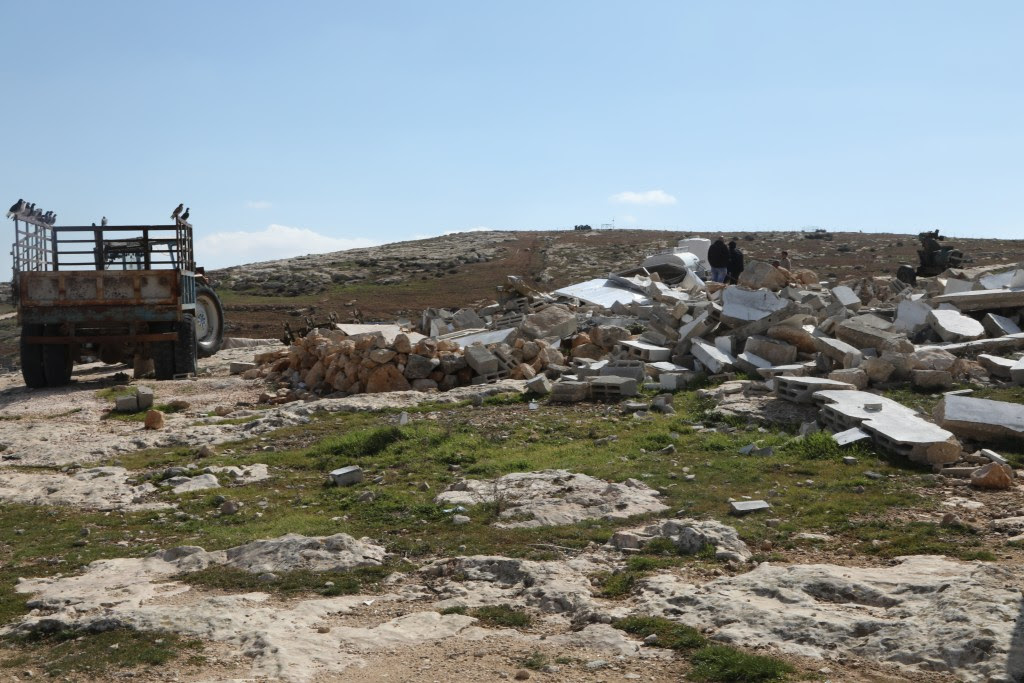 The neighborhood of Ar Rakiz in January.

Demolitions are a regular event in Ar-Rakiz, like in the rest of South Hebron. That day we were there the soldiers – maybe six or seven of them, armed to the teeth – parked their heavy jeep on the crest. Rasmi went up the hill to talk to them. 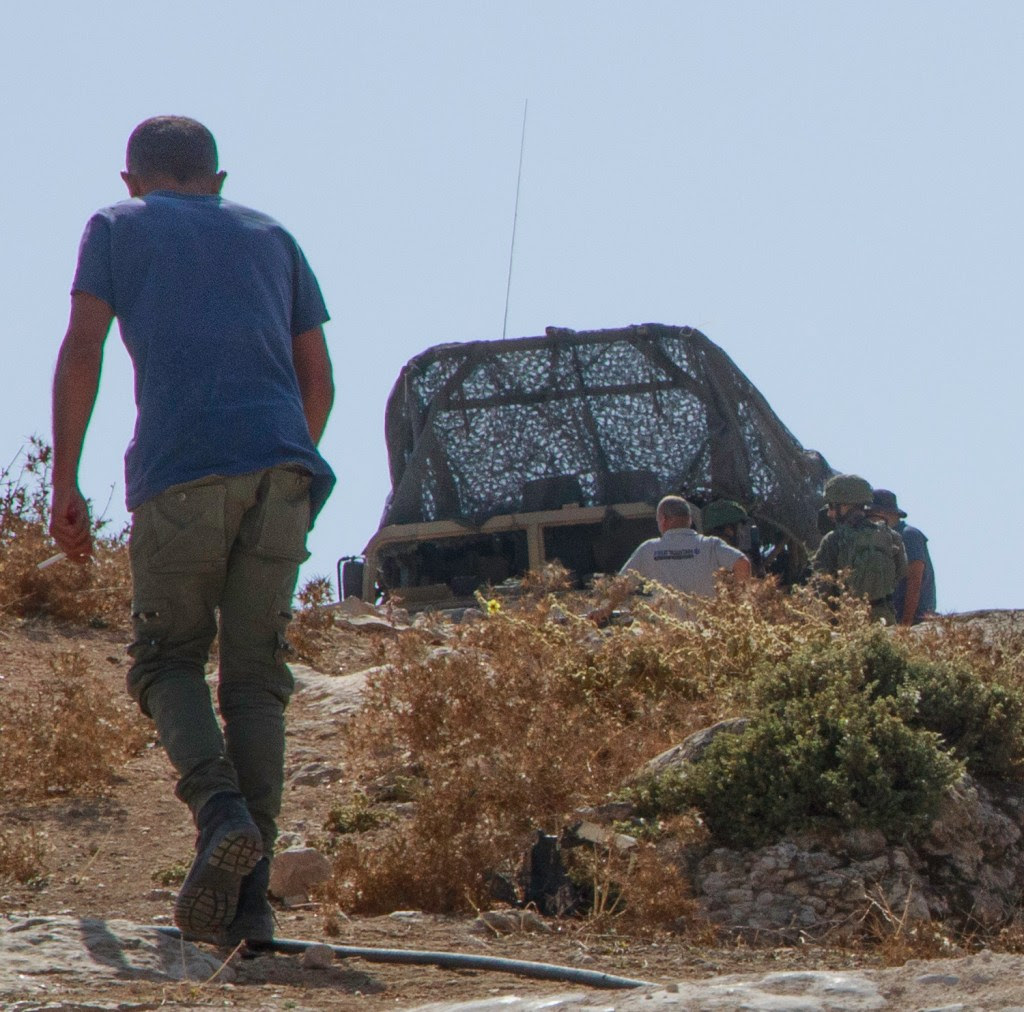 They told him to get the leftist activists out of there, fast. 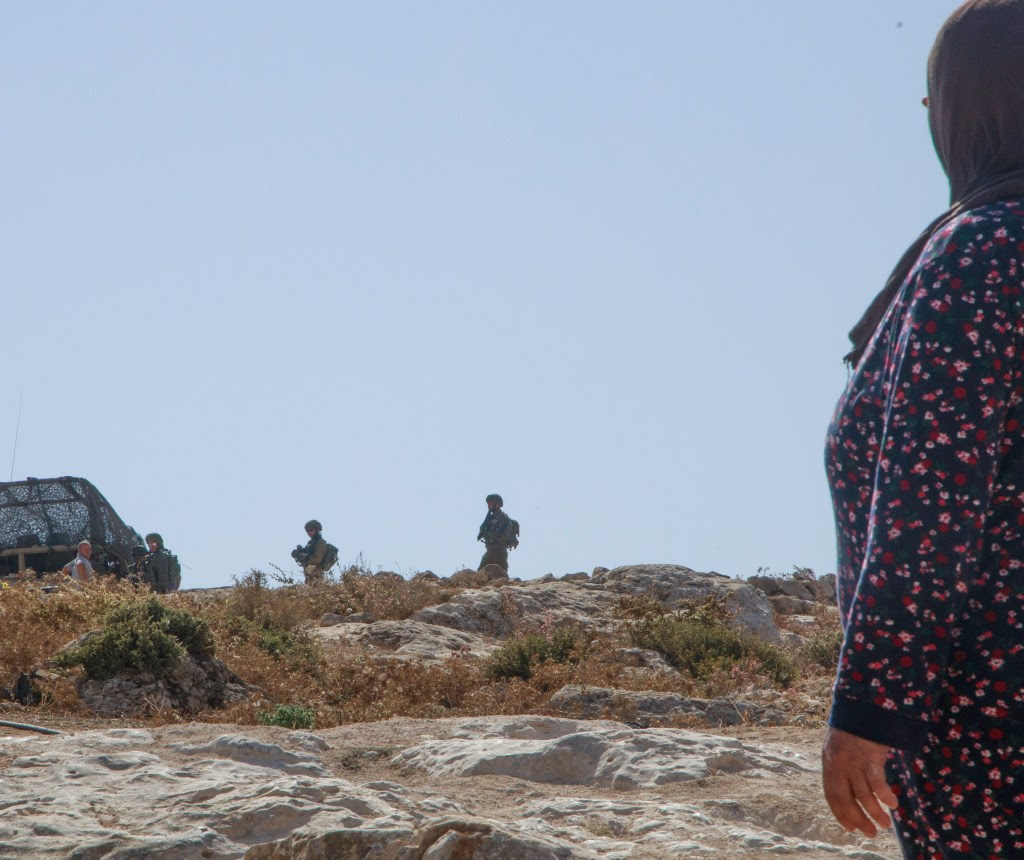 Farsi, the mother, said to me: “Take Harun up to them and show them.” She didn’t want the soldiers in the village. 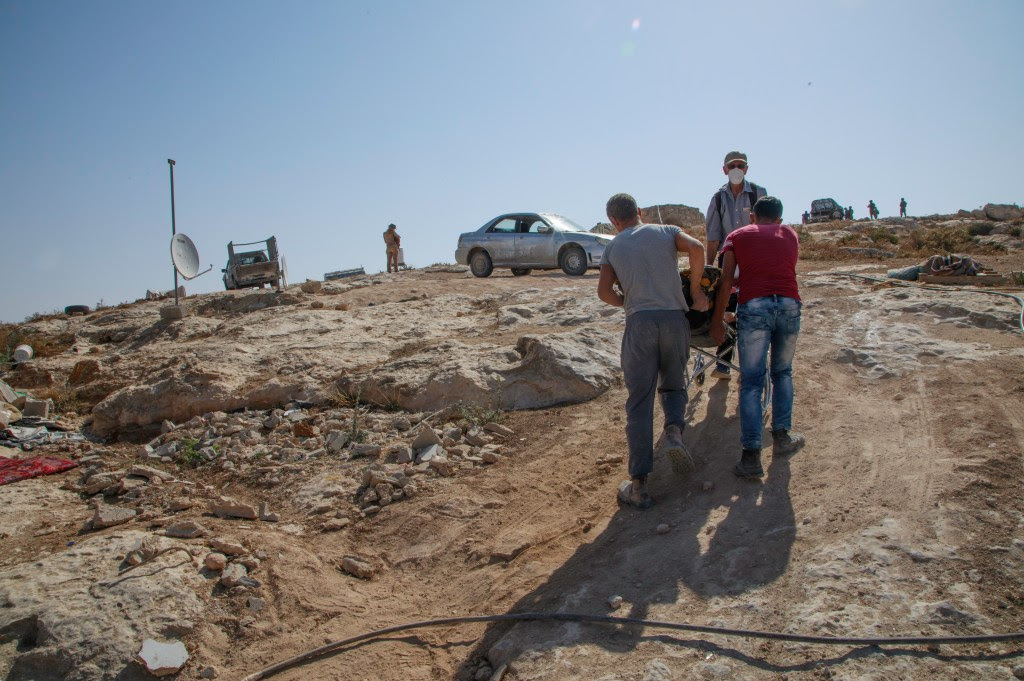 The author and two of Harun’s family members wheeling him up the hill.

So that’s what we did. It wasn’t so easy. He’s 25 years old and very heavy. Three of us – two young men from the family and me – carried him up the slope in his wheelchair. Harun was wrapped in a blanket and more or less unconscious. I slipped a couple of times on the gravel, since I was walking backwards, holding on to the front of the wheelchair. Finally we got to the ridge near the top of the hill. 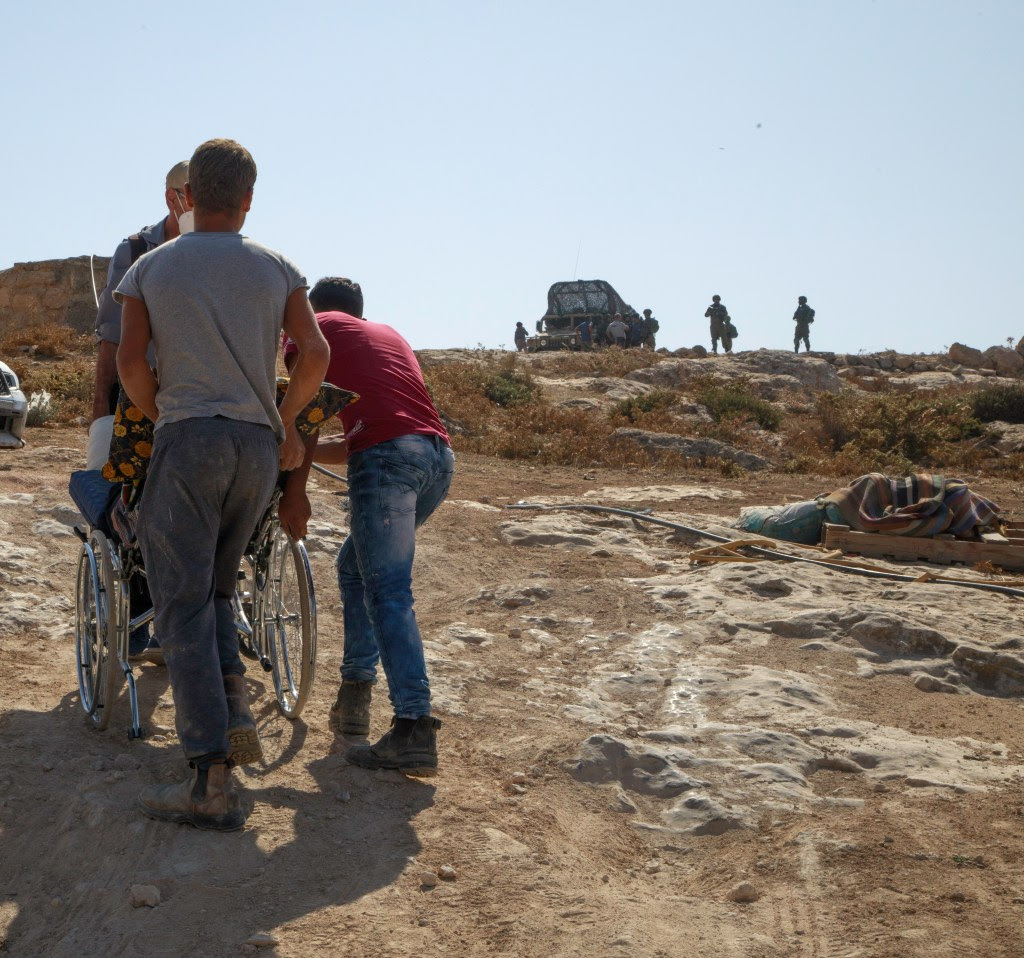 The author and two of Harun’s family members wheeling him up the hill.

The officer said, “This is a Closed Military Zone. You have to leave right now. If you don’t move, we’ll arrest you.” I asked him if he knew Harun’s story and could understand why we were there. No, he didn’t know, and he had his orders. I gave him a brief summary. The army, I said, destroyed Harun’s life for nothing. Look at him now. 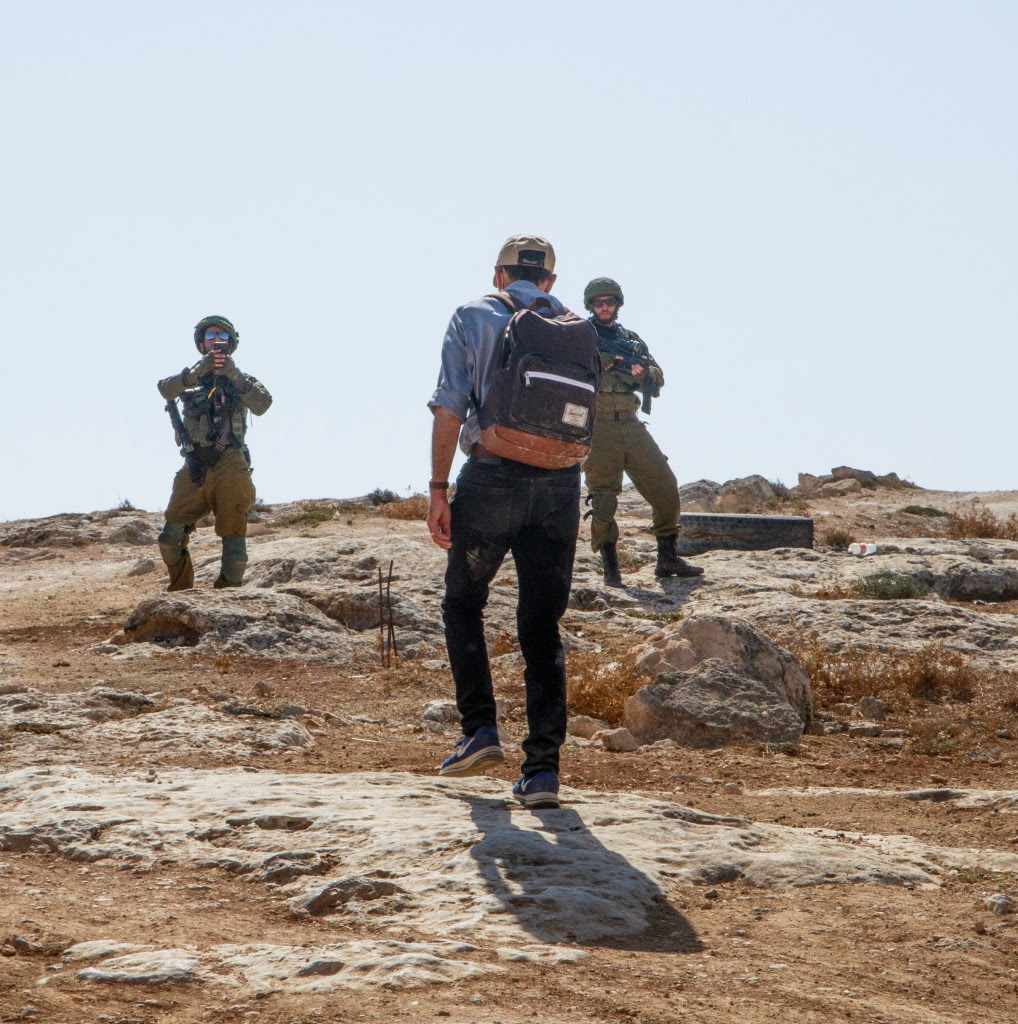 I thought the officer was not unmoved by the story, but I wasn’t sure. We stood there for a while, looking at one another. Then he again threatened to arrest us and again ordered us to leave. We very slowly went farther up the hill, leaving Harun with his family, and then down through the cypress and olive trees into the next valley, the soldiers watching us all the time, since we were obviously a danger to the State of Israel.

Jews shouldn’t come to comfort Palestinians or share their sorrow. That’s one very good reason to have a Closed Military Zone. 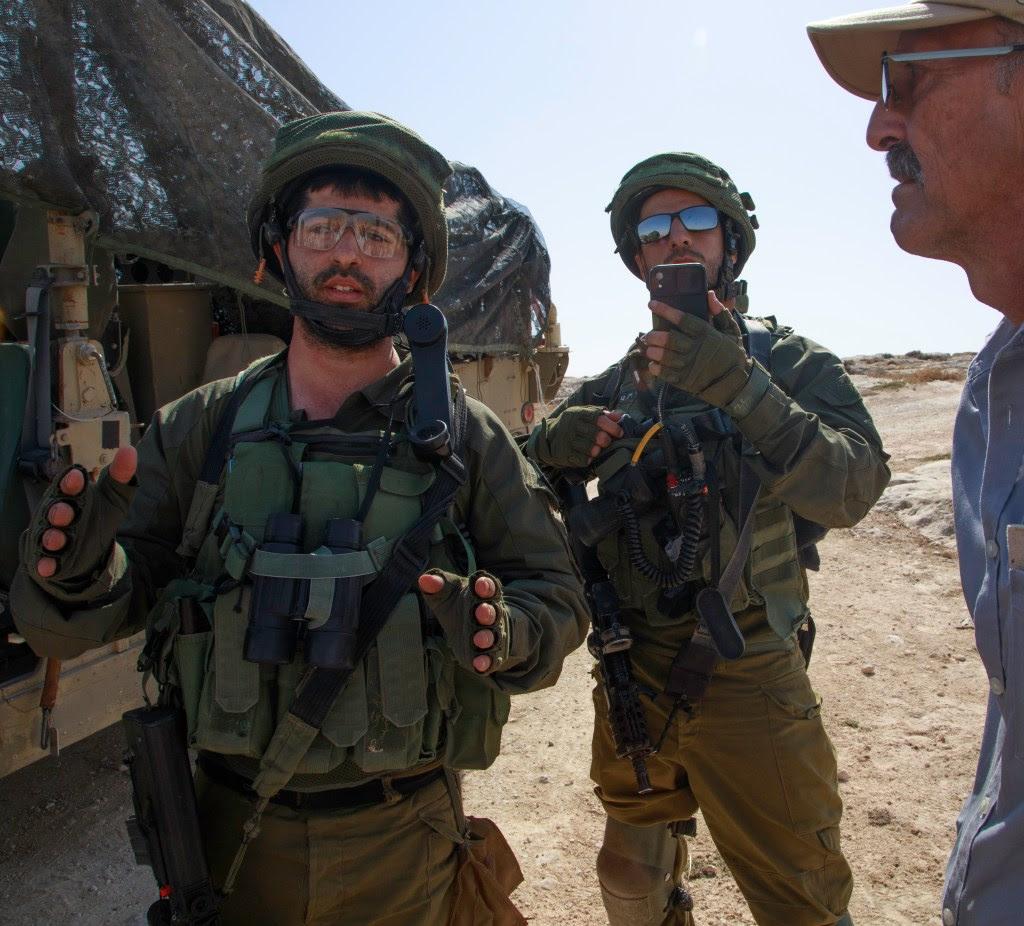 The order, incidentally, was totally illegal. We know all there is to know about Closed Military Zones. But there is no longer any court in Israel that will hold the army to the law. Keep in mind that someone gave the soldiers their orders. 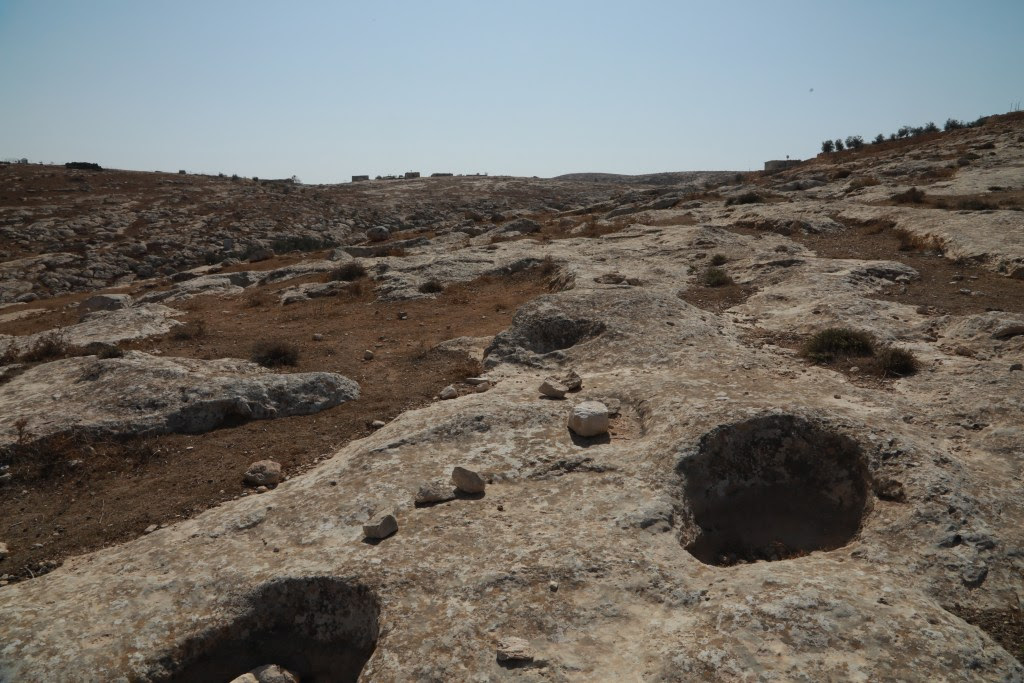 Our descent into the valley was not easy, we slid and stumbled over the rocks; Peg was too busy navigating her way to take pictures until we reached the bottom. 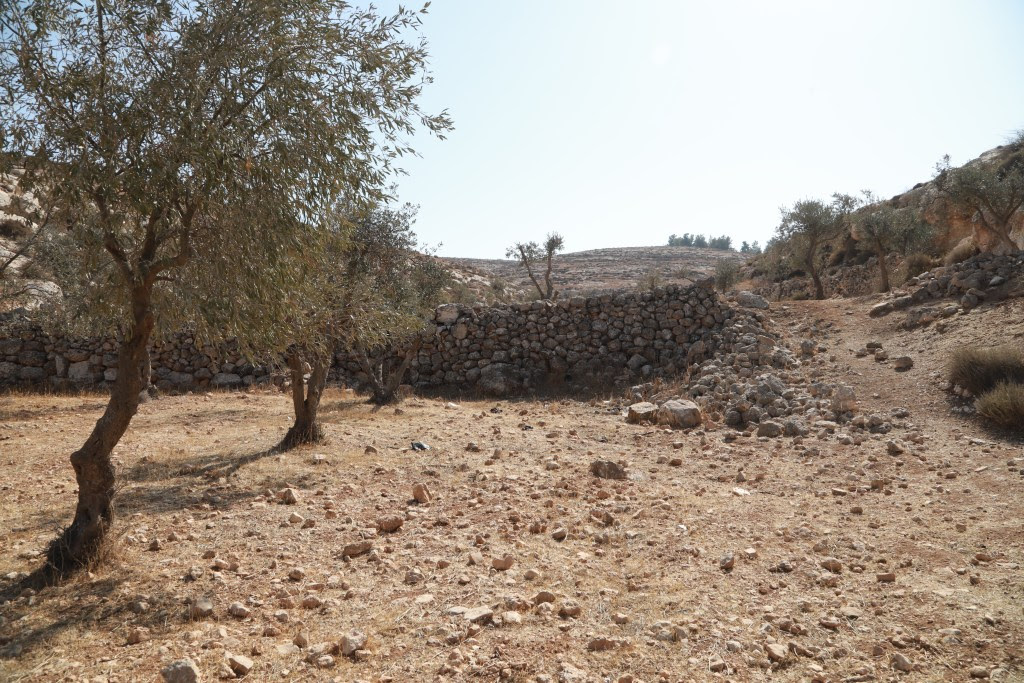 As I was trying to get Harun, barely alive, unable to move, legless and wordless, up that hill to show him to the soldiers, I was thinking: This can’t be real. When you have that sort of thought, you know it’s about something real, like human evil.

This week, among many other bad incidents, a middle-aged Israeli peace activist who was picking olives with Palestinians was savagely attacked by a Jewish settler. The activist was badly wounded and eventually evacuated to hospital, where the police turned up and arrested him on some concocted charge. Needless to say, the settler thug was not pursued or arrested. I think the police in the territories teach their new recruits the operative rule: Whatever else you do, strive to arrest the innocent.

At Twaneh, three activists, people we know, were accompanying schoolchildren from Tuba home from school. Another crazed settler attacked them, repeatedly, on the path. Soldiers came and, oblivious to the settler, arrested the activists. They were guilty of trying to protect young children from harm – not theoretical harm (see our earlier post about Twaneh).

Welcome to the Altneuland of Israel. 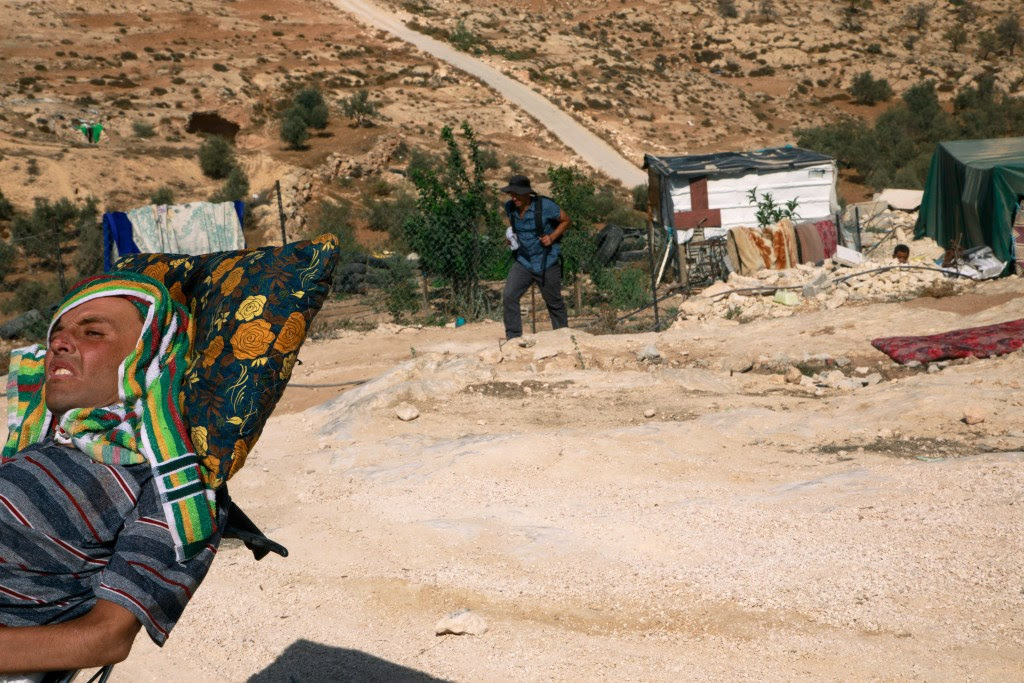 All photographs by Margaret Olin.

David Shulman is an Indologist and an authority on the languages of India. A professor at the Hebrew University of Jerusalem, he is an activist in Ta’ayush, Arab-Jewish Partnership. His latest book is More Than Real: A History of the Imagination in South India, published in April 2015.

Disclaimer: In Palestine's Ar-Rakiz Lie the Remnants of Lives Destroyed by Israeli Soldiers - Views expressed by writers in this section are their own and do not necessarily reflect Latheefarook.com point-of-view