Holy month of Ramadan and attacked peaceful Palestinian worshippers with rubber bullets, batons and tear gas besides desecrating and  causing damage to the mosque.

This was done knowing very well that Al Aqsa is the third most important mosque in Islamafter Holy mosques in Makka and Madina and Ramadan is the holy month. However Zionist Jews wanted to destroy Masjid A Aqsa and build their Solomon’s Temple in its place.

This is how they committed massacre after massacre of Palestinians, terrorized and driven themout from their lands where they established their racist state of Israel.  Up to date Israel has no borders and no constitution as they plan to stage more wars and grab more lands to create greater Israel.

Meanwhile they also started cold blooded killing of Palestinians in the occupied West Bank.The latest being the  killing last week  ofShas Kamamji and Mustafa Abu Al-Rubin Jenin and the execution of three youngsters, the youngest of whom was the child Qusay Hamamra in Bethleham.

In doing soIsraelis demonstrated to the world that they have not changed   a bit from the days of 1940s when they committed DeirYassin, KafrKassim, Tel El Zatar, Sabra-Chatila and scores of other genocides and massacres 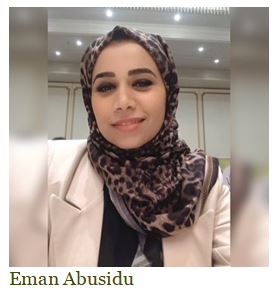 Explaining Israeli atrocities at Msjid Al Aqsa Palestinian journalist Eman Abusidu had this state in the Middle East Monitor;On Friday 15 April 2022 Muslims went to Al-Aqsa Mosque to perform their morning prayer only toface a repeatperformance of Israeli barbarity on them.Last year, it witnessed clashes between Palestinians and Israeli police during the Month of Ramadan fast and ignited an 11-day Israel-Gaza war that killed more than 250 Palestinians in Gaza

This year too Palestinian worshippers were attacked without any provocation and injured158.Israel alsostormed parts of the mosque compound fired sound grenades and rubber bullets and arrested more than 450 people.

SoundsEwes, a Jerusalemite journalistsaid“Israeli occupation forces attacked young and old, men and women, journalists and ambulance crews, causing many injuries among them. They also inflicted widespread damage to Al-Aqsa Mosque’s chapels and courtyards, including libraries, utilities, doors and windows.This year’s Israeli attack was more violent than that of last year.

These clashes   came at a  sensitive time as Ramadan coincides with the Jewish Passover and their plans to sacrifice animals as part of their rituals in the mosque.

In the previous years, sacrificial ceremonies took place, with police approval, in other areas of the Old City. This year, however, Jewish extremist settler groups threatenedto slaughter their sacrifices inside the courtyards of the blessed Aqsa Mosque. ”

Columnist Ismail Patel pointed out that Masjid Al-Aqsa has been in danger since the Israeli Occupation of East Jerusalem in June 1967. The Israeli authorities have allowed Israeli extremists to intimidate and violate the sanctity of Masjid Al-Aqsa.

One point of direct political incitement is marked by Ariel Sharon, who in 2019 flanked by Likud politicians stormed the Aqsa Haram al-Sharif. The Palestinian reaction to the Israeli provocation led to the Al-Aqsa intifada when thousands of Palestinian homes were demolished, thousands  arrested and over 3,000 Palestinians killed.

For Muslims around the world, Al-Aqsa is the symbol of Prophetic memory that not only links the three holiest sites of Makkah, Medina and Jerusalem but also the Prophet’s biography. Al-Aqsa also forms the fabric of Muslim historicity. Al-Aqsa calls on Muslims to draw lessons from Umar, the second Caliph on how to behave in victory. Al-Aqsa through the life of Salahudeen teaches Muslims steadfastness and perseverance. Al-Aqsa is also the site of meditation and reflection. It is for these reasons that Al-Aqsa was resident  to great scholars like Imam Ghazali, Rabia Basari, Shaykh Ibrahim ibn Adham and others.

The Israeli desecration of Masjid Al-Aqsa is an affront to Muslims across the globe.

After more than 500 settlers entered the courtyards of Al-Aqsa Mosque the question remains, where will events lead to in the coming days? If Al-Aqsa is endangered, Jerusalem, the West Bank, the Gaza Strip and the Palestinian interior will all be on fire.  At that time, Israel with all its military force will not be able control the flames because at that point we will be witnessing a third Palestinian Intifada.

Meanwhile head of the World Popular Organization for Jerusalem Justice and Peace, Father Manuel Musallam, said Christians alongside Muslim Palestinians will die in defense of Al-Aqsa Mosque, and will never hand over its keys to the Israeli occupation

, leading from the Western Wall to the Al-Aqsa Mosque compound in Jerusalem’s Old

Scholars representing over 40 Muslim organizations and groups from around the world warned against the potential Israeli raids on Al-Aqsa Mosque.A statement read by Professor Wasfi Ashour Abu Zaid in Istanbul said: “Israeli occupation forces and Jewish settlers have been preparing to raid Al-Aqsa Mosque and perform their religious rituals, including slaughtering sacrifices inside Al-Aqsa Mosque during the Jewish Passover which started on 15 April.”

Though these attacks were insult to Muslims worldwide yet regimes in the entire Middle East, not representing their people, turn blind eye only to safeguard their corrupt ad oppressive regimes under US protection and pittance. For example while Israel desecrate Masjid Al Aqsa shamelessand morally bankrupt regimes in Egypt, Morocco and petro dollar sheikhs in UAE  and Bahrain roll red carpets to receive Israeli leaders.

Israel will continue its barbarity as it enjoys the blind support of US, UK, France and rest of Europe and Russia. 24th April 2022 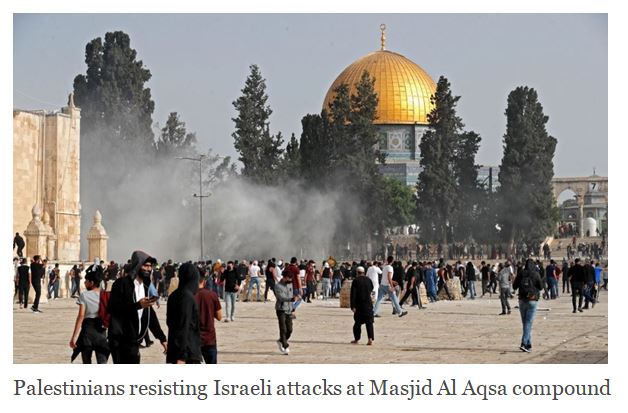 This barbarity is becoming routine during Holy month of Ramadan - Views expressed by writers in this section are their own and do not necessarily reflect Latheefarook.com point-of-view