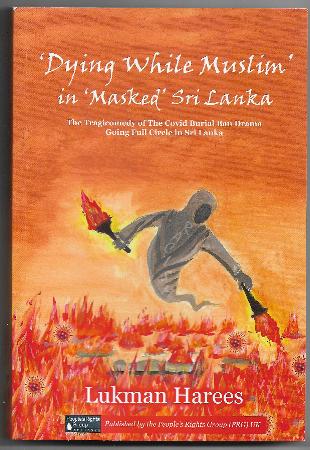 The event was organised by PRG, supported by the umbrella Sri Lankan Muslim organization COSMOS, and the SLMCC. A representative gathering from all communities participated. The keynote address was delivered by Zara Mohammed, Secretary General of Muslim Council of Britain, UK, which played a key role in internationalising the State Sanctioned Forced Cremation Policy of the Government of Sri Lanka.

This book is the seventh book authored by Lukman Harees. He has also authored publications such as ‘Mirage of Dignity in the Highways of Human Progress’ published in the US, ‘Clouding the Crescent in Sri Lanka’ in English , two Sinhala poetic sociological works ‘Thewatha’ and ‘DhurasthaDaknaya’, ‘Wisdom at our Doorstep’ and ‘In Search of our Roots’. He is also a regular writer to many local and international journals.

Disclaimer: Book on ‘Dying While Muslim’ in Masked Sri Lanka’

by Lukman Harees, Launched in the UK - Views expressed by writers in this section are their own and do not necessarily reflect Latheefarook.com point-of-view