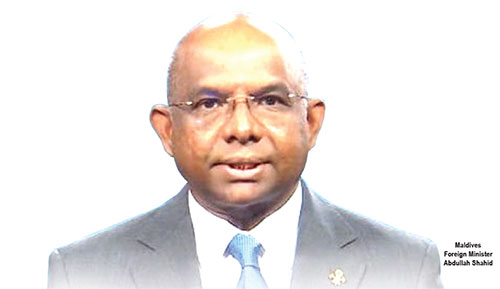 The Maldives has been elected UN General Assembly President by a substantial majority and this ought to provoke considerable thought among regional and international big political players. Maldives Foreign Minister Abdullah Shahid was elected UNGA President for 2021-2022 by a majority 143 votes or nearly three-fourth of the 191 countries that voted in the annual elections, reports said. This is by far one of the most ground-breaking developments in global politics in recent years.

The Maldives’ closest rival in the election, Afghanistan’s Foreign Minister received 40 votes and was backed by China and Pakistan. This is a stark fact in this connection that ought to be particularly thought-provoking. The Maldives was backed by regional heavy-weight India and we are left to conclude that in this regional power struggle Pakistan and China have been upstaged by India. Accordingly, India emerges as the foremost power-wielder in South Asia.

The UNGA is not as decisive as the UN Security Council in the maintenance of international peace and security but it is reflective of global opinion on issues at the heart of international politics and economics and just could not be downgraded as playing a less effective role than the UNSC. Moreover, our warmest congratulations to the Maldives on its triumph; it has chalked out an important role for itself in a most pragmatic manner and the Maldives’ pragmatism is something the global South in particular needs to look at long and hard.

It is easy for the objective observer to concur with former Maldives’ President and Speaker Mohammed Nasheed when he says the Maldives’ victory is a ‘great day for small island states and for climate vulnerable countries everywhere.’ This is a focal point. A priority for countries everywhere is responsible conduct that would prevent the world from hurtling further in the direction of environmental destruction and the Maldives is doing its best to remind the world of its obligations on this score.

The Maldives’ is focusing on the here and now and this is an encouraging change from the global South’s usual preoccupations which, it could be argued, are at a distant remove from the concerns of ordinary people. However, international opinion would be erring by seeing these latest developments as a proxy war victory for India at the expense of regional rivals China and Pakistan. India is unlikely to be swept off its feet in consideration of the fact that it has to maintain cooperative links with Afghanistan while forging constructive links with China and Pakistan. Ideally, the Maldives- linked developments ought to lead to a re-think on foreign policy issues on the part of all these powers who matter.

The international community has been very slow in coming to the realization over the decades that the current world political and economic order is not the best that it could have had. Generally, it has failed to separate the interests of its power elites from those of ordinary people everywhere. This is a huge drawback of our times. Ideally, the world has to work consensually towards advancing the best interests of ordinary citizens everywhere. This is the emerging challenge. The Maldives has helped in focusing on this need.

It would be tempting to think among some quarters that in the South Asian theatre at least the ‘’Cold War” has been won by the India-US alliance as opposed to the China-Russia-Pakistan combine when considering the UNGA vote and linked developments. But the moral support some small states are garnering is a pointer to the fact that the current world order has failed human kind.

The challenge is to think well beyond Realpolitik to a world ruled by the public interest. The challenge is for the foremost powers of the UNSC. If the Biden administration in the US is for the public weal it would enter into a constructive dialogue with China and Russia, for instance, on these questions. There is a need to leave behind Cold War type thinking and to consider how the best interests of people are served.

An irony not to be missed is that while the majority of the big powers continue to be obsessed with national security, significant small states are thinking in terms of human security. Here too the Maldives has scored.

But there is a long way to go. The global South in particular would need to shun the fixation of seeking big power patrons and consider as to how they could serve the best interests of their people by acting pragmatically on the foreign policy front. The Maldives has forged security links with the US but it is no stooge of the West. The link is a pragmatic way of serving its best interests.

As this is being written, the world is facing a quandary. The UN is warning of ‘mass deaths’ in Myanmar. In some parts of the country the military crackdown has driven tens of thousands of people out of their homes. Starvation and disease are rampant and the international community could be accused of looking the other way. How is the world community intending to deal with such crises?

Not all is well with all small states. As a result of state indifference may be, thousands of Sri Lankans are leaving our shores, mostly lured on by the search for economic security abroad. These are not only ‘boat people’. Among them are science graduates and other needed personnel. The ‘Brain Drain’ is very much on.

It’s gladdening to note that the US and China are contemplating talking to each other once again and that trade and investment are among their top priorities. This is the way to go and pragmatism rather than divisive ideologies ought to be the cornerstones of their talks. Suddenly, these arch rivals could not be expected to talk to each other too warmly. But hopefully, the Maldives has impressed on them the need to think well outside worn out thought processes that do not serve the human interest.

Disclaimer: Small Island State comes into its own in international politics - Views expressed by writers in this section are their own and do not necessarily reflect Latheefarook.com point-of-view