It is seventeen years today since devastating Tsunami struck mainly the east coast of the island on December 26, 2004 and snatched way almost one percent of the Muslim population there.

Saudi Arabia built 500 houses to Muslim families affected by Tsunami. Houses were ready for occupation. Sinhala extremists, led by  Buddhist monks, opposed giving the houses only to Muslims. Thus the houses were not given .Today they are covered with thick jungle where snakes, reptiles and other wild animals live.

In the same way billions of foreign aid poured into the country for Tsunami affected people .However many complaint that they got nothing and did not know where the money disappeared. 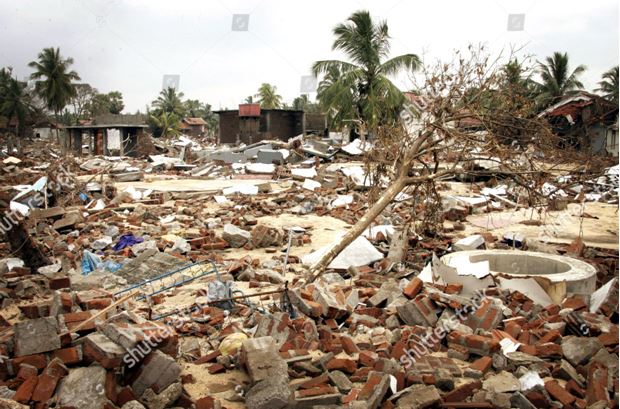 Muslim tsunami victims were discriminated and discarded even in human misery.

For example the ferocious and frenzied Tsunami waves snatched away hundreds of thousands of lives, dismembered thousands of families, wiped out communities, razed buildings, swallowed villages and cities and left behind an unprecedented trail of destruction, never heard of in the country’s history.

Muslims were the worst affected and number of villages in the east were flattened. During the first few post-tsunami days, there was an unparalleled outpouring of support and sympathy for the victims. Spontaneous goodwill poured forth overwhelmingly when people from all communities and from all walks of life rushed to help the victims.

In Colombo, many left everything and rushed with whatever food, water and clothes they could gather to help the victims everywhere. It was highly commendable that in doing so they rose above race, religion, ethnicity and other considerations.

Individuals who emptied their pockets and the civil organizations that rushed to the scene of disaster with whatever possible aid also restored the -fading faith in humanity. They demonstrated that compassion and human kindness still remain alive among the average people though politicians play politics and divide the communities. Though the tsunami brought together the warring and divided communities, yet it was a short-lived dream as conflict broke out within a year. According to early estimates, the total value of the damage stood at US$1.5 billion.  According to reports billions of dollars poured into the country in the form of aid to the unfortunate tsunami victims.

Many who were awaiting aid said that they didn’t get any aid and they did not know where the aid money went, but they were  living in single room wooden houses. According to one report, money was feverishly transferred not only to government establishments, but also to accounts of individuals, companies and charity organizations.

Sri Lanka’s deputy executive director of the anti-graft organization Rukshana Nanayakkara said: “It was almost impossible to find out what happened to the cash. According to an initial government audit only 13 percent of the aid was spent during the first year of reconstruction, but since then there has been no formal examination of accounts.”

Hundreds of tsunami survivors complained to the graft buster against local and international aid agencies. He added that, “there has been no proper accounts maintained on the aid money and we believe that only a fraction of the aid trickled down to the real victims”.

While tsunami victims were languishing in appalling conditions in inhospitable temporary shelters, there began to emerge report after report of corruption highlighting to what extent human beings could descend to in exploiting even human misery and sufferings for their own benefit.

According to a report by the then Auditor-General, S.C. Mayadunne, “government officials misspent or misappropriated hundreds of thousands of dollars worth of tsunami aid after failing to follow instructions. Officials gave millions of rupees in tsunami assistance to thousands of families who were not directly affected while others displaced by the tsunami did not even get the rations they were entitled to”.

Some other reports pointed out that Sri Lanka received 3.2 billion dollars in foreign aid pledges.  In the absence of proper account-keeping, many believe that only a fraction of the aid actually went to the real victims and it was impossible to track down what happened to the cash. Official figures are often contradictory, but even the state admits only about half of the estimated 100,000 damaged or destroyed homes have been rebuilt as the country marked the tragedy’s second anniversary.

Under the headline “Merry times for tsunami racketeers” this is what a report by Shamindra Ferdinando  in the “Island” of 26 December 2006 said, “Even years after the tsunami, the government is yet to punish State officials accountable for waste, corruption and negligence in the aftermath of the unprecedented natural disaster.

“Inquiries reveal that the government has failed to initiate action against them despite clear evidence of wasteful expenditure on a large scale. Politicians have connived with officials to help their supporters play out funds and in some cases, further the interests of their associates. They have profited from crooked deals involving crooked means, hiring of vehicles and compensation for damaged and destroyed houses

Summing up the situation, a compassionate Sinhalese had this to state in his column in a local daily: “It is true that we did rise to the occasion, but sadly it is also true that we folded up even faster than it took us to stand tall. This is why at 9.30 a.m. on December 26, if we mourn anything, we should mourn the tragic fact that we could not respond adequately as citizens, as fellow human beings. Perhaps we should all go to the beach, if not to show gratitude, to lament. Let us, when we do this, or whatever else we find ourselves doing at that most inauspicious time, reflect on the fact that in this Buddhist country there is a thing called karma pala, that while some things are bad, among the worst is the intent to prey on misery, and that such transgressions have a way of constructing appropriate punishments.

“I suggest, humbly, that we recognize in our blood streams, in our heartbeats and our sinews the sad truth that we have failed and hope that this recognition generates in all of us the first seeds of resolve that allows us to do better. Let us resolve to rectify our errors and truly emerge as a people worthy of a nation, simply by developing the faculty of sympathy and gathering the strength to move forward, not alone but with each and every one left behind by the tsunami waves.”

During tsunami disaster then President Kumaratunga, who was in London, rushed home and assured that their houses would be rebuilt within six months. But these promises disappeared in the same way of the tsunami waves, despite billions of rupees given   to help tsunami victims.

In the aftermath of the tsunami, President Chandrika Kumaratunga’s government initiated a move to sign a joint mechanism with the LTTE. But the Muslim tsunami victims were not only kept in the dark but were also ignored by the agreement to please the LTTE which opposed Muslim participation.

In negotiating and signing what later came to be described as Post Tsunami Operational Management Structure (P-TOMS), the President Chandrika Kumaratunga, did exactly what Ranil Wickremasinghe did when he signed the Ceasefire Agreement with the LTTE On February 2002, despite all assurances Muslim interests were dismissed when the CFA was signed

In her desire to seal an agreement at any cost President Kumaratunga ignored the   Muslims. The so-called peace broker, Norway was active partner in this conspiracy against the Muslim tsunami victims.

” Columnist Sassanka Samarakkody said, “The main priority of our opportunistic political leaders is certainly not the wellbeing of the people or the territorial integrity of the country, but to cling on to power or grab power at any cost. And as recent history has demonstrated, they will not hesitate to enter into a pact even with the devil to enjoy power. And the LTTE knows this weakness of our southern leadership very well, and must be enjoying every bit of the present drama over the P-TOMS. Because they know, ultimately, whatever the outcome, the Tiger terrorists (NOT the long-suffering Tamil people) will be the ultimate winners, as usual”.

Disclaimer: Tsunami aid-Racism even in human misery. By Latheef Farook - Views expressed by writers in this section are their own and do not necessarily reflect Latheefarook.com point-of-view