Twelve years since the end of Sri Lanka’s war, the sacrifices made by the nation’s armed forces and related State institutions were remembered in May. Tamils overseas too, meanwhile, remembered those who died in the 30-year war. But why have the Muslims, the only community to stand on the side of the territorial integrity of the country and heavily paid for that stand-point, failed to give expressions to their patriotic roles in the war? 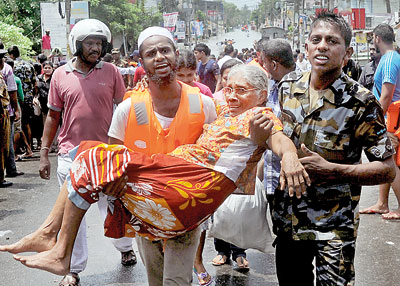 A Muslim man assisting the forces during a flood disaster

The Muslims never wanted to bring up the questions relating to the destructions and killings at the hands of the LTTE. Why should they have remembrances now? The Easter Sunday attacks of April  21, 2019 and the extensive and unceasing anti-Muslim publicity given locally and globally to the massacre of Christians and foreign tourists appear to be erasing memories of the community’s contributions during the war. These were roles played primarily in the national interest of the country but also in the long-term interests of the community.

But the highly disproportionate 21/4 anti-Muslim hype has relegated the far more dangerous LTTE war to pale into insignificance. Thus the need has arisen to remind the country of the Muslims’ role in both – the Eelam war and the Easter bombings. What were some of these roles?

Following the 1983 anti-Tamil riots, and the failures of the 1984 All Party Conference (APC) and the 1985 Political Parties Conference (PPC), LTTE intensified recruiting Muslims in the East with some Muslim youths being appointed LTTE area leaders. The effective emergence in 1986 of the Sri Lanka Muslim Congress (SLMC) led by the 36-year-old lawyer, better known for his Tamil oratory, M H M Ashroff absorbed these deviant Muslim youths into the SLMC fold, crippling the LTTE recruitment drive amongst Eastern Muslims.

The three Tamil-speaking minorities of the North-East, the Hindus, the Christians and the Muslims comprised 85% of the NE population and the merger of the East with the North was offered on a platter to the minorities by President J R Jayawardene following the Indo-Sri Lanka Accord of July 1987, though allegedly not supported by the SLMC as the LTTE, which too opposed the Accord,was firmly committed to a separate state in the NE with long-term adverse effects on the community and the country.

3) Prabhakaran successfully got the IPKF out of Sri Lanka in 1989, but failed to get Ashroff into the LTTE boat!

The LTTE succeeded in getting President Ranasinghe Premadasa to order the Indian Peace Keeping Force (IPKF) to leave the country, but failed to get Ashroff onto the separatist boat. Muslims believe that if Prabhakaran had succeeded, Eelam would have been nearly achieved long prior to the celebrated defection of the LTTE Eastern Commander in 2006, and then very likely the Eastern Commander would never have defected!

Following the exorbitantly excessive anti-Islamic and anti-Muslim responses of the authorities to the Easter Sunday attack, giving the impression of both foreign and local vested interests taking revenge, there is rethinking within the Muslim community whether Ashroff’s SLMC was right in not supporting the Tamil’s aspirations for self-determination, or at the least to address long standing Tamil grievances.

4) Over a thousand Muslims were killed in 1990 for supporting the territorial integrity of Sri Lanka, of which over 250 were from Kattankudy, the epicenter of unprovoked killings of unarmed civilians by the LTTE!

Because the Eastern Muslims stood on the right side of history, in support of the territorial integrity of Sri Lanka, over a thousand Muslims paid the supreme price. According to the University Teachers for Human Rights (UTHR-Jaffna) headed by Prof Rajan Hoole during the 32 days from July 12, 1990 to August 12, 1990 alone, 386 Muslims were done to death in five massacres committed by the LTTE. Of this number, 147 Muslims were shot in four mosques while at prayers, while another 121 Muslim men, women and children while sleeping in their homes were cut, chopped and axed to death. Of the total 386, nearly 250 Muslims were from and around Kattankudy, the epicenter of unprovoked murders of unarmed civilians.

5) Many Malay Muslim intelligence officers in the armed forces were selectively killed by LTTE!

Many Malay Muslims who served in the Deep Penetrating Units of the armed forces did yeoman service to the country with several of them getting killed by the LTTE.

6) The Iranian interest-free US$ 700 million facility in 2008, a critical year in the war, helped Sri Lanka pay for arms required for the forces!

During 2008, the Islamic Republic of Iran, headed by President Dr Mahmood Ahmadinejad, provided Sri Lanka’s then President Mahinda Rajapaksa, an invaluable oil credit facility on interest-free, deferred-payment terms of a sum that shot up to US$ 700 million by September that year. This helped Sri Lanka to pay for essential arms and ammunitions that the forces required, to maintain the upper hand that they had already acquired in the pre-final rounds of the highly intense war, concluded in May 2009. As Sri Lanka’s then Ambassador to Iran, I did play a key role in securing this facility with the support of Secretary to the President Lalith Weeratunga and Secretary – Finance Dr P B Jayasundara.

7) Muslims gave advance warnings as early as late 2014 of some emerging radicals!

Muslims must also draw attention, time and again to the advance warnings given to the authorities by the community as early as late-2014, long before the alleged RAW reports in April 2019 of the emergence of some radicals within the community. Muslims also complained to then-IG Police and the Attorney General through the Bar Association of Sri Lanka (BASL) to take action on matters that were contributing to the perceived radicalisation. That authorities since then were continuously monitoring most of those elements are entirely true! But how the Indians got ahead of the Sri Lankan detectives and how the RAW had access to the Easter bombers are beyond our understanding!

Pakistan played a very significant role in assisting the armed forces in many ways, while the Libyan Arab Jamahiriya also reportedly assisted. Many other Muslim interest groups also facilitated the then-government and the armed forces in too numerous ways to be included here.

On the other hand, Lord Michael Naseby addressing the House of Lords as recently as May 19, 2021 alleged the LTTE war in Sri Lanka was partially conducted from London led by UK citizen Dr Anton Balasingham, while another British citizen, his wife Adele “was fighting in Sri Lanka and was closely involved in recruiting over 5,000 child soldiers as stated by UNICEF. This is a war crime by any yardstick.”

The United States in the final stages of the war in April 2009, attempted to get then-President Mahinda Rajapaksa’s clearance, which he ignored, to rescue Prabhakaran and his top aides from the war front. Norway and Israel played Dr Jeckyll and Mr Hyde around the war. These are the countries, yesterday’s conspirators, that are being invited with the support of Opposition Leader Sajith Premadasa and UNP leader Ranil Wickremesinghe to conduct ‘illegal’ investigations on the Muslims’ role in the Easter Sunday attacks in Sri Lanka! Let’s pray for the country!

(The writer is a former MP and was Ambassador to Iran)

Disclaimer: Anti-Muslim hype has relegated the more dangerous LTTE war into insignificance By M M Zuhair - Views expressed by writers in this section are their own and do not necessarily reflect Latheefarook.com point-of-view