Skip to content
PALESTINE Palestine Gaza Issues
Spread the love
Palestinian president Mahmud Abbas on May 25, 2021 at the Palestinian Authority headquarters in the West Bank city of Ramallah [ALEX BRANDON/POOL/AFP via Getty Images]

Arabic news website Arabi21 recently revealed details of a trilateral deal signed between the US, Israel and the Palestinian Authority (PA), which lays down strict terms for monitoring the Palestinian mass media, education curriculum and reactivating the trilateral incitement committee which consists of the three governments.

The document signed on 14 July 2012, during the visit of Deputy Assistant Secretary of State for Israel and Palestinian Affairs Hady Amr to the region. The deal also stipulated the formation of an Israeli-American committee to reevaluate the legal positions of Palestinian prisoners, and to press the PA to carry out its recommendations.

Based on the deal, the PA agreed that the Palestinian resistance members and prisoners inside its own prisons in the occupied West Bank “must be” monitored by the trilateral committee. According to Arabi21, the deal stated that the PA is controlled by its security cooperation with Israel, and now the Palestinian curriculum, money and media will be monitored by Israel and the US.

Two months ago, PA security services murdered Palestinian activist Nizar Banat at his uncle’s house after he highlighted corruption among PA officials. Under much popular pressure and continuous protests, the PA acknowledge his murder, but insisted on its policies. To this day, it is violently subduing peaceful protests, beat protesters, arresting them and more recently sexually harassing female activists.

According to Al Jazeera and Felesteen newspaper, there are currently scores of political prisoners being held in the PA’s jails. Al Jazeera reported families of some of these prisoners saying that their sons are being tortured severely.

Many of the prisoners are journalists and lawyers. The PA tries journalists as criminals, claiming they violate laws in order to deter them and stop them covering its crackdown on freedoms, including protests against mismanagement, corruption, cancelling elections, security cooperation and recently the murder of Nizar Banat. 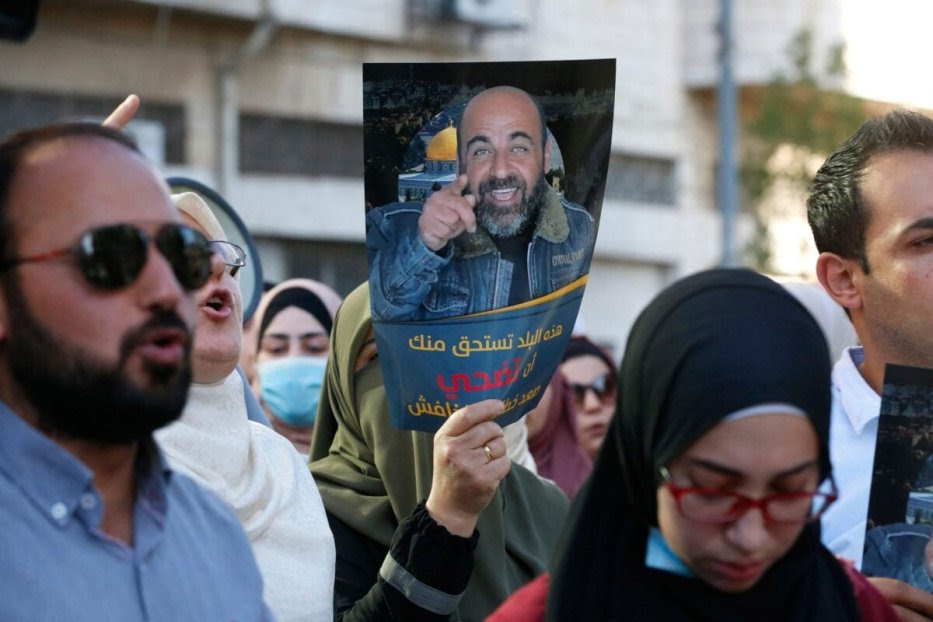 Palestinians hold posters depicting human rights activist Nizar Banat during a protest triggered by the violent arrest and death in custody of Banat, in his hometown of Hebron in the occupied West Bank, on June 27, 2021 [MOSAB SHAWER/AFP via Getty Images]

Meanwhile, the PA hosts Israeli journalists. Early in August, the PLO’s Committee for Interaction with Israeli Society, headed by Mohammed Al-Madani, a senior Fatah and PA official and close aide to PA President Mahmoud Abbas, invited a group of Israeli journalists to Ramallah and organised meetings for them with PLO and PA officials, including PLO Executive Committee member and PA minister Ahmed Majdalani.

The purpose of the meeting, Fatah and PA media official Muneer Al-Ghagoub said, was to get the Israeli public to learn about the “daily suffering of the Palestinians as a result of Israeli right-wing policies, which will not lead to stability and peace.”

READ: The status quo is being reinforced for Israel’s benefit

Explaining how the PA operates, prominent journalist Yara Hawwari wrote: “The PA security forces exist under the framework of a ‘securitised peace,’ meaning they are obligated to work in full cooperation with the Israeli regime. This security cooperation includes the handing over of information and the whereabouts of Palestinian activists to the Israeli army, as well as joint meetings and workshops which result in similar techniques of oppression used against Palestinians across a colonised Palestine… The security forces serve to maintain Palestinian compliance to the occupying regime and subdue Palestinian resistance to the status quo.”

Palestinian journalist and author Ghada Al-Karmi said the PA’s security services are being used to implement Israel’s laws. “Palestinian police force established and trained by the CIA soon morphed into a massive security apparatus, with general intelligence and preventive security branches,” she wrote in an article for Middle East Eye, adding: “Though supposedly accountable for their actions, these forces often function autonomously in the occupied West Bank and are widely seen more as agents of Israel than as fellow citizens.”

The so-called security cooperation between Israel and the PA seems only to serve the occupation by setting Palestinian forces against their fellow citizens in order to protect Israel.

As time has passed, Palestinians have become ever more aware of the real reason behind the existence of the PA, and this forced them to revolt against it. Opposition parties have had little to do with the recent uprising which has been started at the grassroots level.

The Palestinian Authority was set up to help and protect Israelis and never functioned as a force for good for Palestinians. If its interests were truly its people, it would accept their demands, protect their freedoms, work to lift the sanctions on Gaza, hold free and fair elections and abandon security cooperation with the occupation.

Disclaimer: The PA only cares about Israel - Views expressed by writers in this section are their own and do not necessarily reflect Latheefarook.com point-of-view