Every year, Mahmoud Abbas presents us with a speech addressed to the UN, and it is often prefaced by statements from the leaders of the Fatah movement and employees of the PLO, who Abbas appointed as representatives of outdated factions. These statements refer to a new speech as “bombs” and, sometimes, to” surprises” but, ultimately, the mountain labours and bring forth a mouse.

Since assuming his three positions (head of Fatah, the PA, and the PLO) Abbas has never lived up to the greatness and sacrifices of the Palestinian people, neither in his speeches nor in his actions on the ground, which is the most important of all.

Since then, he has been committing national taboos, which no one expected, and is even doing so in public. This is not strange for a man who stood against all the Palestinian people and their forces in the most splendid period in its history since the Nakba (Al-Aqsa Intifada), and he allowed himself to be used against the late Yasser Arafat. The result was a coup against the idea of returning to armed struggle in exchange for reviving the Oslo Accords and sanctifying security cooperation with the enemy. It also allowed the invaders to exercise the cheapest occupation in history (this last line was said by him) and rejecting the resistance. Before this, he eliminated the right of return by talking about the comfort of refugees in their host countries. This is in addition to many other catastrophes by him, like when he did not live up to the level of the sacrifices made by the people during the Jerusalem Intifada and the Sword of Jerusalem battle, as well as making Hamas’ recognition of the decisions made by UN a condition for reconciliation. 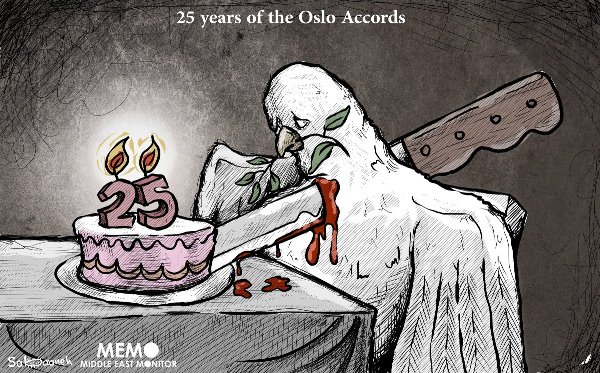 When you talk about all of this with some members of the “Fatah tribe”,—unfortunately I’ve had to use this expression—they respond by saying that the man was clear and frank in his programme. It is as if publicising national deterioration makes it a noble act or announcing the programme exempts him from review. This is despite his almost two decades of absolute failure and the increased Judaisation, settlement, and oppression. It is worth noting that Oslo’s biggest justification was to stop the occupation devouring more land.

What makes the man’s catastrophes more miserable is that his era has witnessed unprecedented speeches and positions by the Zionists, not only from Netanyahu but also from the newcomer to the Israeli government, Bennett. Openly rejecting the Palestinian State never occurred before Abbas’s rule (the problem was in its conditions). Meanwhile, everyone knows that Jerusalem came outside the negotiations during his rule as well, as Tzipi Livni said to his chief negotiator, Saeb Erekat, during Olmert’s rule, as well as her refusal of the return of even one refugee to the territories occupied in 1948.

Thus, Abbas’s rule is the worst in the history of the Palestinian national movement on every level, especially when we add to it the period of Arab normalisation that was, and still is, using the justification that the PA is the greatest normaliser. This is to mention his increased begging of the enemy and returning to meetings with its officials (Bennett is the one refusing to meet Abbas) without meeting the condition of freezing settlement expansion, which has gone on for about 10 years. He then entered Biden’s maze, represented by “economic peace” which gives some life to the shameful PA in exchange for killing the Palestinian cause, which regained glory during the Jerusalem Intifada and the Sword of Jerusalem battle.

Now, we come to the new speech, which he began with the traditional weeping we are all familiar with, and then ended by saying, “This is a moment of truth with the occupying Power. We are at a crossroads. We have had enough. This situation cannot continue, and our people cannot endure it any longer.”

What he said next was comical, “Options are available, including returning to a solution based on the partition plan of resolution 181 (II) adopted in 1947 which gives the State of Palestine 44% of the land.” He failed to get 22 per cent but is now demanding 44 per cent. 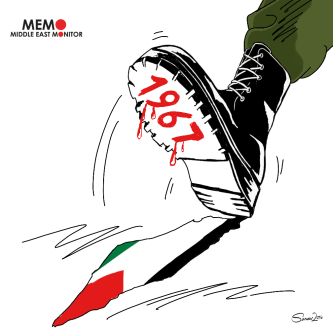 After that, he promised a “surprise” when he said, “Israel, the occupying Power, has one year to withdraw from the Palestinian territory it occupied in 1967, including East Jerusalem.” If this does not happen, (he asks rather than answers) “If this is not achieved, why maintaining recognition of Israel based on the 1967 borders?”

Then what? He said that he would go to the International Court of Justice in The Hague, ignoring the existence of a ruling it made in 2005, which was a turning point in the history of international institutions that were considered stronger than Resolution 242 but ended up being just ink on paper.

This is the summary of the great speech by Abbas, and these are his upcoming surprises that his spokesmen promised us!

If nothing is expected of these people, except for a group that prioritises the cause, then why should the Palestinian people continue to run after Abbas?

Should not the resistance forces be held responsible for revolting against him and searching for an alternative path that represents all Palestinians, such as a comprehensive uprising project that anyone can join? It is true that this requires the restoration of the forces in the West Bank, (mainly Hamas) and changing their mechanisms of action and those responsible for it, but the launch of the project, clearly, has become a necessity.

There is no hope for Abbas, and it is likely that his alternatives would be similar to him, meaning that waiting for his departure will be useless and a complete waste of time.

Disclaimer: What's next after Abbas's latest threat? - Views expressed by writers in this section are their own and do not necessarily reflect Latheefarook.com point-of-view