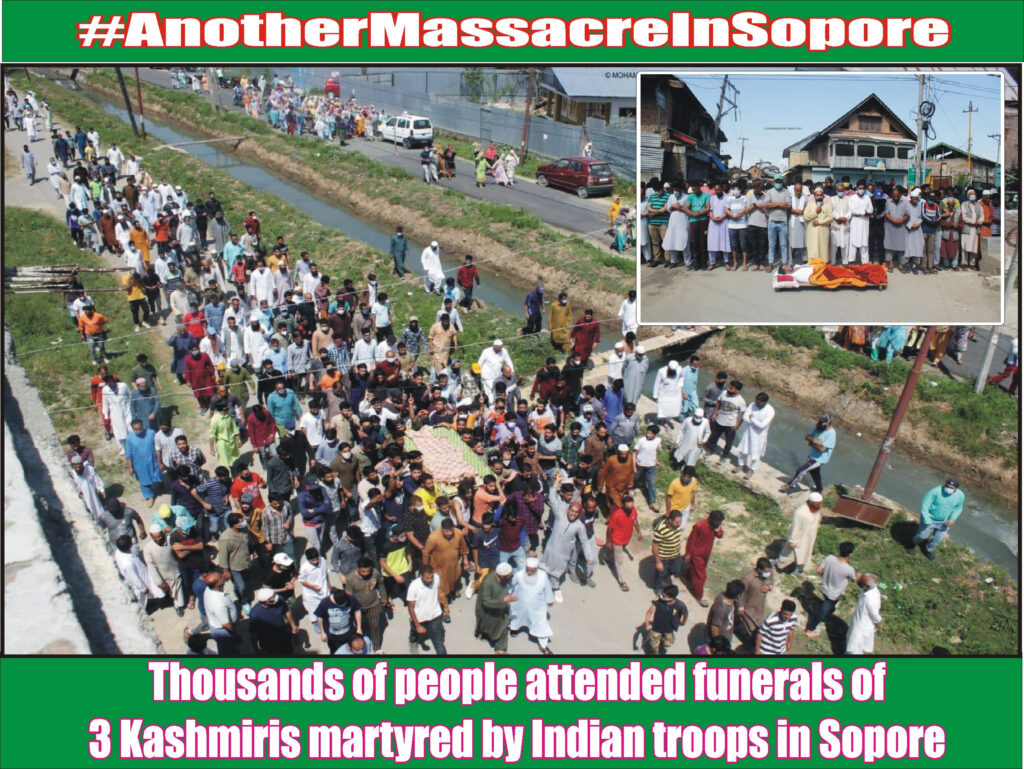 Islamabad, June 13 (KMS): Despite imposition of curbs and restrictions, huge participation by the Kashmiris in the funeral of three youth martyred by Indian troops in occupied Jammu and Kashmir’s Sopore town and eruption of anti-protests is an illustration that Kashmiris are solidly behind the ongoing freedom movement.

A report released by Kashmir Media Service, today, said that Sopore killings have added to the brutal massacres carried out by India in the occupied territory to instill fear among the Kashmiris. However, the killing backfired and triggered massive anti-India protests in the town with thousands of people coming out of their houses to mourn the killing.

The report said that massive people’s participation in martyrs’ funerals in Sopore is a clear message to India that Kashmiris will not surrender and they will continue sacrificing their lives till freedom from Indian yoke. The large-scale participation is a symbol of people’s rejection of India.

After every martyrdom, the Kashmiris’ resolve to get freedom from India gets even stronger, it said and added that the martyrs’ blood would not go waste and Indian defeat in IIOJK is the writing on the wall. The report maintained that Kashmiris are determined to accomplish the mission of their martyrs at all costs.

The report pointed out that Indian troops have committed 30 massacres, killing over 600 people in IIOJK and through these massacres, New Delhi in fact plans to quell impending mass uprising in IIOJK.

The report urged the world community must come forward to stop genocide of Kashmiris in the occupied territory.

Disclaimer: India has failed to infuse fear among Kashmiris through massacres - Views expressed by writers in this section are their own and do not necessarily reflect Latheefarook.com point-of-view