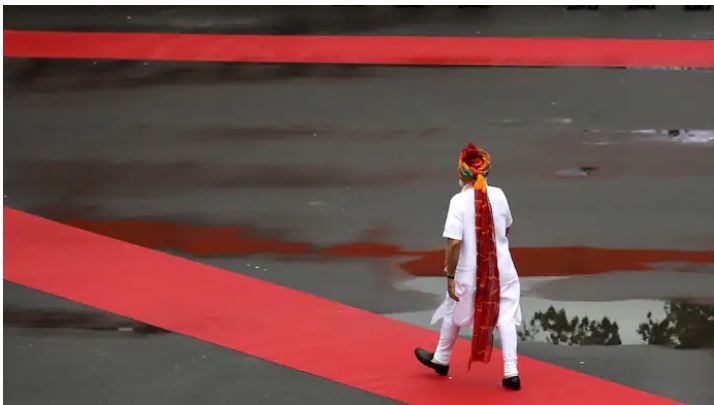 India’s coronavirus crisis is stunning to behold. In northern India, bodies are being cremated in public parks because crematoriums have exceeded their capacity. Elsewhere, officials have suggested that families bury in their backyards relatives who succumbed to covid-19. Despite being the world’s largest producer of vaccines, India has fully vaccinated less than 2 percent of its 1.3 billion people. Shortages of the antiviral drug Remdesivir have people begging friends and relatives on social media to locate supplies. Family members drive each other to multiple hospitals in the hope of finding a bed. Recently, 22 covid-19 patients in a hospital died when its oxygen-generating facility sprang a leak. The daily rate of infections has reached more than 300,000, and epidemiologists believe the country will peak around mid-May with more than 5,000 daily deaths.

The underlying infirmities of India’s health-care infrastructure were well-known. Still, through harsh lockdown measures, the nation had controlled the initial wave by January. Then, Prime Minister Narendra Modi’s government abandoned its caution and, in a series of stunningly reckless decisions, invited the second wave that is now crushing the country. This colossal failure of policymaking has many forebears: general callousness, crass electoral considerations and sheer ineptitude. For a government that first assumed office in 2014 with a promise of sound, technocratic governance and an end to political paralysis, the second surge represents an astonishing abdication.

It’s not like Modi doesn’t know how to lead ably. In his first term in office, he initiated welfare programs ranging from educating girls to ending public defecation across the country. Launched with considerable fanfare, these programs won over a number of his critics, who grudgingly conceded that they were worthwhile endeavors and could demonstrate the efficacy of government. Five years later, the disorganized and ideologically incoherent opposition all but guaranteed Modi a second term.

The U.S. is planning post-pandemic life. In India, we’re trying not to die.

But a haughty, out-of-touch approach has always been evident, too — and it is the hallmark of the government’s coronavirus response. Without consulting public health experts or epidemiologists, Modi imposed a draconian, nationwide lockdown with just a few hours’ notice, leaving millions of migrant workers stranded hundreds of miles from their homes. This 21-day shutdown briefly impeded the spread of the virus, but the prime minister did not use the opportunity to plot against its eventual resurgence. Instead of using the respite to build up stocks of personal protective equipment, boost vaccine production or ramp up testing, he returned to a business-as-usual governance. He and his alter ego, Minister for Home Affairs Amit Shah, focused their energies on caricaturing opposition politicians, harassing political dissidents and claiming at a World Economic Forum meeting that India had crushed the virus. As four of the country’s states went to the polls for legislative elections, Modi threw himself into full campaign mode, attending rallies without any prospect of social distancing and with mostly unmasked supporters. (Not to be outdone, some opposition parties followed suit.) Modi has also allowed a massive Hindu religious festival to be held in Haridwar, a city on the Ganges. This festival, the Kumbh Mela, routinely attracts more than 1 million pilgrims and can last three months. The political appeal of permitting this festival was obvious: It would virtually guarantee him and his party the votes of the Hindu faithful.

The message of all this is clear: Policy goals, political dramaturgy and electoral prospects are more important than the well-being of the country’s population. Had Modi and his government felt concern for India’s citizenry, they could have used the rallies and the festival as occasions to vaccinate vast numbers. The hapless national inoculation drive is especially galling, because India, between its public and privately run facilities, is the largest producer of vaccines in the world. (It has ample experience with vaccination drives, too: It eliminated polio across the country though a massive campaign between 1995 and 2011.) And instead of prioritizing its vulnerable population, India chose to pursue “vaccine diplomacy,” offering supplies to neighboring countries and various nations in Africa. Only in mid-April did Modi’s government belatedly release $400 million in funding to the Serum Institute of India, a world-class vaccine manufacturing company that is producing the AstraZeneca shots.

What’s more, an instinct to protect Modi’s Bharatiya Janata Party (BJP) led it to permit party stalwarts to peddle all sorts of medical quackery. Some local party leaders suggested that practicing yoga and using cow urine as a disinfectant could ward off the virus. Vijay Chauthaiwale, the head of the national party’s foreign affairs department, encouraged the consumption of bovine urine and turmeric as possible cures. A local BJP president, Dilip Ghosh, at a campaign stop in the industrial city of Durgapur, echoed these views.

Modi’s haughty decision-making style predates the pandemic by years. His government botched two early initiatives — the demonetization of more than 80 percent of India’s currency and the equally inept rollout of a much-needed national goods and services tax — because it didn’t consult carefully with the relevant stakeholders. The result was widespread economic disruption and pain for the less privileged. In 2019, without taking the opposition into confidence, Modi disregarded constitutional norms by abrogating the special status of India’s only Muslim-majority state, Jammu and Kashmir. Last year, he used his parliamentary majority to pass three pieces of legislation designed to fundamentally alter India’s agricultural markets, largely without discussion or debate. Not surprisingly, these new farm laws set off the most sustained protests in recent memory even as the coronavirus raged. Modi refused to back down and sought to simply wear down the protesters. And, characteristically, he has prevailed.

Modi spoke in code when he visited America. Here’s what he was saying.

Now that public parks are becoming temporary crematoria, patients are lying on the sidewalks outside hospitals, and ambulances (when available) lack oxygen, Modi’s associates have resorted to more drastic, albeit familiar, tactics: They argue that the government’s critics are merely seeking to sow nationwide discord. Delhi is now pressuring social media outlets like Facebook and Instagram to take down posts that are critical of its handling of the crisis.

But the haphazard, abrupt approach to critical public policy questions now haunts Modi in ways he can no longer deflect. After living down a host of decisions it took without much regard for the consequences, his government may have finally met its Waterloo. Despite efforts to squelch the bad press, everyone knows who is to blame for the fatal disaster unfolding today.

Disclaimer: Modi’s pandemic choice: Protect his image or protect India. He chose himself. By Sumit Ganguly - Views expressed by writers in this section are their own and do not necessarily reflect Latheefarook.com point-of-view