The law of the country should be equal to everyone. That’s what the law books say. Then we also have religion 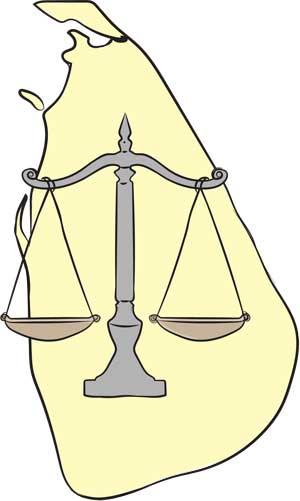 which is used as a tool to defuse conflict and sort out matters relating to disputes.
Even during Gautama Buddha’s time he averted a possible battle between two brothers, in Ceylon, over a gem studded chair. He made the two compromise by preaching the Buddhist doctrine to them. History gives us many other occasions where religion produced that ‘balm’ to sooth agitating minds.

One musn’t forget the fact that this is a country with a multi cultural society; hence the practice of several religions.
Just the other day former Governor of Western Province and the Leader of the National Unity Alliance Azath Salley was arrested by the CID. One of two reasons given for his arrest was he stating about the Sharia Law and adding that he didn’t acknowledge the country’s law. When appearing on television and making that controversial statement Salley also referred to the Quran.

Sri Lanka as a nation coming under the control of several countries and being subject to invasions saw its system of law being greatly influenced by the Hindu Law. Subsequently the country’s law was influenced by the Roman-Dutch Law and eventually by the English Law. It’s said that it doesn’t really matter whether there is a law in the country. What matters is whether the law is applied.

It’s good to have one law in the country. But there are other aspects to consider. A woman who can present enough facts to support a divorce case might get the verdict in her favour. But the result of the case can have severe repercussions. Roman Catholic churches don’t encourage divorce and this divorcee might not be entertained in the church again. So where does law stand where the practised religion also offers solutions to same problem?
The law doesn’t allow for judgment on court cases where the verdict is viewed as ‘stubborn’. Also we mustn’t forget the fact that the Sri Lankan constitution makes provisions for a person to practise the religion of his or her choice. If one studies the Quran it spells out solutions to most of the conflicts and disagreements arising in human lives. But Muslim religious scholars state that in a situation where religious belief clashes with the country’s law the latter must prevail.

Religion is a sensitive topic. Lawmakers and institutional heads must be careful when taking decisions. A classic example is when Premalal Perera sought legal assistance when the Department of Railways made it compulsory for employees to donate a days wage from their monthly salaries to the National Defence Fund. Being a Buddhist Premalal objected to donating any money towards the cause which would fund the purchasing of arms that would be eventually be used to destroy human lives. (Premalal Perera, A Weerasuriya (1985) 2 SLR 77).
It must be mentioned here that the regime interprets Azath Salley’s statement on Sharia Law and the country’s law as an utterance that has the potential to lead to religious extremism.
There is also a school of thought that suggest that laws when designed shouldn’t agitate or marginalise minority communities.

We cannot forget the fact that the LTTE established its legal arm (not a court) in 1991 and used a farm titled the ‘Mushkan Farm’ to detain people who broke the law. There are stories where Muslim underworld gangsters in the Western Province had systems where they heard the versions of grieved parties. Not escaping our minds is the manner in which a member of an elite Christian family in Negombo took it upon as his right to hear the grievances of victimised villages; at his residence. When one takes all this into account it’s justifiable and reasonable for all communities to have one law for the entire island nation.

Disclaimer: Let’s have one law for Sri Lanka EDITORIAL - Dailymirror - Views expressed by writers in this section are their own and do not necessarily reflect Latheefarook.com point-of-view