Skip to content
Afghanistan
Spread the love
A young shepherd plays with his sheep in Afghanistan’s Logar province (AFP)
The roads, towns and cities outside Kabul may be free of fighting and bombs, but in places like Logar province new hardships have arisen
By
Ali M Latifi  in Pol-e Alam, Afghanistan

When Mohammad Aslam first began driving people between Kabul and Logar in 2019, the province was already one of the most insecure in Afghanistan.

Despite the northern part of the province being only 40 minutes south of Kabul, the security situation in Logar suffered a precipitous decline every year since 2014, when Ashraf Ghani, himself a Logari, became president. By 2015, even the district closest to Kabul, Mohammad Agha, had largely become a no-go zone to many Afghans.

But by the time Aslam began driving between Kabul and Logar, the capital and its environs had also become increasingly unsafe, as the threats of street crime, unclaimed targeted killings and even bombs grew with each passing year.

“There was fighting all the time, everywhere,” Aslam says of the dangers on the 70km journey. In fact, in a year-and-a-half, his car had been shot at 16 times. When he found himself in crossfire, Aslam would pull up against a wall and hope no one came to ask him who the passengers in his car were.

At the time, many of his passengers were members of the Afghan army and intelligence agency, who were prime targets for the Taliban, whose fighters could pop up at virtually any point on the road, which still suffers from the damage left by landmines.

“What choice did I have. I needed to make money somehow,” the 29-year-old says.

Now that the Taliban, who were the primary source of fear on the road, are back in power, Aslam says he has no fears about driving passengers between Kabul and Logar. Only a few days ago, he returned home from taking a sick passenger to a hospital in Kabul at 2.30am, something that would have been unthinkable only a year ago, when the Taliban patrolled the roads as soon as the sun set.

But increased fuel prices are taking a huge chunk out of his profits. A year ago, he would have paid 28 afghanis, or little more than 30 US cents, for one litre of petrol. Now, that has soared to 89 afghanis. Considering each passenger pays him 150 afghanis ($1.68) per ride, the fuel prices leave him barely breaking even at the end of each day.

Aslam and fellow Logaris all say the same thing on the first anniversary of the Taliban’s takeover of Afghanistan: danger may have gone, but poverty has replaced it.

“Go out into the market, no one is there. It’s empty,” Aslam says, standing in front of his recently repaired silver Corolla hatchback.

Shopkeepers in Pol-e Alam, the provincial capital, agree. They say their stores are now mostly empty, as the international sanctions and foreign aid cuts that followed the Taliban’s return to power have affected the average Afghan, not the Islamic Emirate, as the Taliban calls its government.

Meanwhile, the United States froze $7bn of assets the former Afghan government placed in the Federal Reserve Bank of New York, $3.5bn of which will be given to a group of 9/11 victims, money many argue could be used to help alleviate poverty in Afghanistan.

According to the International Labour Organisation, more than one million people, including tens of thousands of women, have become unemployed over the past year. This has had a direct impact on local markets, even in cities like Pol-e Alam, which connects Kabul to provinces in the southeast.

Mohammad Sajed’s family returned to Afghanistan from neighbouring Pakistan two years ago. He’s been working at his family’s gold store since then. The 19-year-old says the last year has been disastrous for their business.

“We just sit around all day in our empty shops to pass the time,” he says, sitting in a nearby tailor shop where his friend works.

Sajed says that their business has taken a 70 percent hit over the past 12 months. The customers they do still get are looking to sell their gold in an effort to make up for lost incomes, but even that has very little profit.

“The customers are smart. They have patience, going from shop to shop until they can find the person willing to give them even one penny or one percent more for their earrings or their necklace.”

The owner of the gold store says he’s now saddled with the rent of about $112 a month, even as he struggles to make a nominal profit.

The gold shop and the next-door tailor shop also embody two sides of one of modern Afghanistan’s biggest and most buoyant industries: weddings.

Grooms and their families buying outfits for weddings are one of the rare bright spots for those working in the tailor’s.

Ajab Khan, a worker at the tailor shop, says demand for wedding attire has persisted, a phenomenon not even seen around the Eid holidays, when Afghans traditionally buy new clothes for the festivities.

The 22-year-old says that over the past two years families cut back on Eid expenses, but not on weddings. According to the World Bank, 70 percent of Afghan households are unable to provide basic needs for their families, but Khan and Sajed both say Afghans will not stop having lavish nuptials.

“Weddings are mandatory, so people will always have them and they’ll always need clothes for them,” says Khan.

“Families are trying to fool people with gold-painted metals instead of the real thing. They’re buying the cheap stuff these days,” says Sajed.

‘Anyone who knew a trade has left’

Weddings are, of course, a rare exception, serving as a brief distraction from the doldrums that sanctions and aid cuts have thrown the Afghan economy into. Noor Abdur Rahman, a waiter at a Pol-e Alam restaurant, says he knows this too well.

Though he has managed to keep his job, he knows others aren’t nearly as fortunate. “I am OK for now, but the nation won’t be rebuilt by just one person. The economy has to be restarted somehow,” the 28-year-old says.

He says the biggest concern for families right now is rising food prices. According to Rahman, a year ago a 25-kilo bag of rice cost the equivalent of about $20; over the last year that has reached as high as $34. Cooking oil has also nearly doubled in price this year. 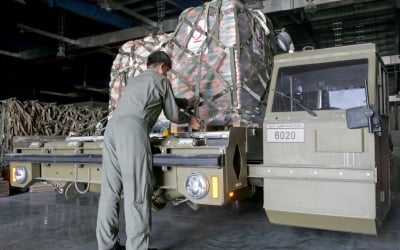 Rahman says these price increases come as thousands of Logaris have either lost their government jobs or had their wages reduced by more than half. He says he hasn’t seen clients who used to work at NGOs and private companies in nearly 12 months, as most are now unemployed and can no longer afford to go out to eat.

Like Kabulis, the Afghans MEE spoke to in Logar are also very worried about the flight of skilled labour from the country.

“Anyone who knew a trade has left,” Rahman says, echoing the concern of business owners across the country.

He isn’t just talking about the highly educated professionals who fled in the early days of the Taliban takeover. Rahman is also referring to those people who worked in construction, textiles, publishing and other industries.

Looking at his friends and neighbours, Rahman knows he’s lucky, and always maintains his gratitude for the roughly $112 in income he still has. Knowing that 23 million people, including 3.2 million children, are at risk of malnutrition, he counts his blessings.

“I have to be grateful for what I have, because it’s so rare nowadays. Imagine, if I was to be ungrateful, then what would all the millions of others who are really struggling say?”

Disclaimer: Afghanistan: Poverty replaces danger in battered provinces a year after Taliban takeover - Views expressed by writers in this section are their own and do not necessarily reflect Latheefarook.com point-of-view