KABUL, Afghanistan: Families in Afghanistan are being forced to sell their children and their kidneys as more than half the population is having serious difficulties meeting basic food needs.

For many years in Afghanistan, people have been selling their kidneys without hesitation to get a piece of bread.

The interruption of international aid following the Taliban’s takeover of the country and harsh winter conditions are putting the lives of millions of people already living in poverty at risk.

Thousands of Afghans, mostly Pashtuns, who have been forced to leave their homes due to a drought in the last four years and conflicts between the Taliban and the previous government in the Shahr-i Sebz region, around 20 kilometers (12 miles) from the city of Herat, are trying to hold on to life. 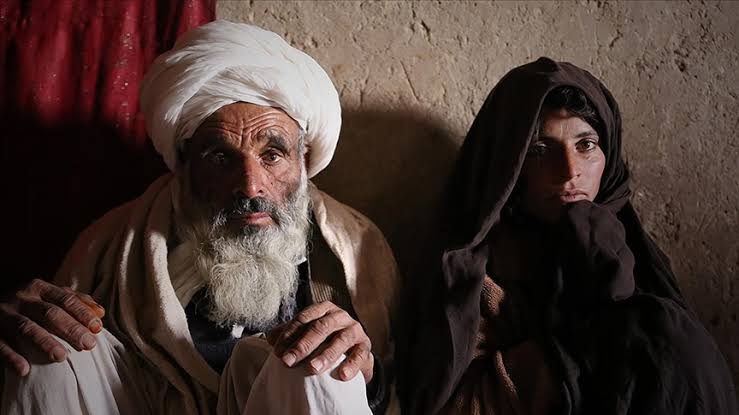 In the region, the houses made of mud and clay do not have electricity, water and heating systems. These days, when winter conditions are getting worse, most houses do not even have a stove. Those with stoves also burn plastic to heat homes instead of wood and coal. This can cause poisoning.

He said he has no money to go to the hospital.

Meanwhile, local residents complain about a lack of jobs. Some teenagers and adults are begging downtown and collecting plastic and paper from the trash. Women also spin yarn from the wool brought by merchants. People can earn a maximum of 50-100 Afghanis (about $0.50-$1.00) per day.

Gulbuddin, 38, said he is currently unable to do any physical work because he sold one of his kidneys before.

He said he sold his 12-year-old daughter Ruziye for $3,500 three years ago and a kidney for $2,000 two years ago for the treatment of his wife, adding his wife’s illness and financial difficulties continued.

He went on to say that he sold his other daughter, 5-year-old Raciye, for $1,500 last year, adding: “If someone comes and wants my eye, I can sell it so that my wife can survive.”

Living with her 70-year-old father, Bibizana, a 30-year-old mother of four said: “I sold my kidney. Then I had to sell one of my daughters. I bought the necessary materials for the house with that money. I wish I had not been born into this world. I wish I had never seen these days. My days are going like hell. I have to endure it.”

With tears in her eyes, she said she did not know how much her kidney was sold for and that she was given only 50,000 Afghanis (around $486).

Additionally, one of the soldiers in the previous Afghan government, Gulamhazret, 25, said his four-month-old baby died from malnutrition and cold and that they buried the baby in the cemetery near their house before they could even take it to the hospital.

Noting that he sold his daughter for $3,000 two years ago, he said: “I am a father. No one wants to sell their child.”

Afghans who want to sell their kidneys go from hospital to hospital, looking for patients to take their kidneys.

Working in the dialysis center at one of the largest hospitals in the capital Kabul, Dr. Hosal Tufan said that in the last five years, more than 200 people applied to them and offered to sell their kidneys.

“Those who want to sell their kidneys come to us, but we reject them because kidney transplants cannot be performed,” Tufan added.

The kidney trade in Afghanistan runs almost like an industry. Herat is one of the central provinces along with the capital Kabul in kidney trade. There are two private hospitals in each province that perform kidney transplants. For this reason, there are people from neighboring countries such as Iran and Turkmenistan who come to Herat and look for kidneys.

The director of one of the private hospitals, speaking on condition of anonymity, said they have carried out more than 100 kidney transplants in the last six years.

“Previously, there was not even a proper procedure applied and followed for kidney transplantation. The Taliban administration banned kidney transplants from unrelated people with a law it published on Jan. 16,” the director added.

The director said the aim of the law is for organ transplants to be carried out under strict control and to prevent kidney trade, adding they are satisfied with the law.

Mevlevi Naimullah Hakkani, Herat’s culture and information director and the Taliban’s provincial spokesperson, said they are absolutely against selling children and organs. People generally make such statements in order to attract humanitarian aid, he said, adding they want to improve the financial situation of these people.

In Afghan families struggling to survive in the grip of hunger and misery, boys are usually able to bring home a small amount of money by working in jobs such as shining shoes in the city or collecting plastic and paper from the garbage.

However, some families want to sell their daughters because they cannot provide financial support for the home. For this reason, selling little girls for marriage is a common occurrence across the country. Girls who are sold can be allowed to stay with their families until they reach the age of 11 or 12. When girls reach this age, they are forced into marriage with people who buy them.

Disclaimer: Afghans forced to sell organs amid poverty, starvation - Views expressed by writers in this section are their own and do not necessarily reflect Latheefarook.com point-of-view