The recent ministerial meeting in Dushanbe of the Shanghai Cooperation Organization and the SCO contact group with Afghanistan left a trail of disappointment. The SCO statement on Afghanistan was a baby step – significant, nonetheless, considering the group’s growing inner contradictions.

There is no progress at the Doha talks, either. Meanwhile, the Pentagon has quietly resumed air attacks on the Taliban. The US may not have boots on the ground but is rebuilding the politico-military capacity to chart the peace process in directions that suit its geopolitical interests.

The apparent US retrenchment hoodwinked the regional states. On its part, Russia even reached out to the US to form a collegium under the canopy of its Troika mechanism.

Formats other than the Doha process are also being discussed. Everyone seems to want to boost the political process. Tehran recently hosted a conference for the representatives of the Afghan government and the Taliban.

China made an offer to be a facilitator for intra-Afghan dialogue “at any time.” But Russian Foreign Minister Sergey Lavrov quickly stepped in to advise, “We think there’s no need to come up with any new agreements to do this. We just need to implement what has already been approved by, above all, the Afghan government and the Taliban” at Doha.

Russia seems to prefer the Collective Security Treaty Organization (CSTO) to the SCO as the security vehicle to handle the developing Afghan situation. Lavrov also disclosed that the Troika has “discussed, in particular, the candidacies of India and Iran. I believe this would boost this format’s capabilities. We’ll see how it goes from here.” 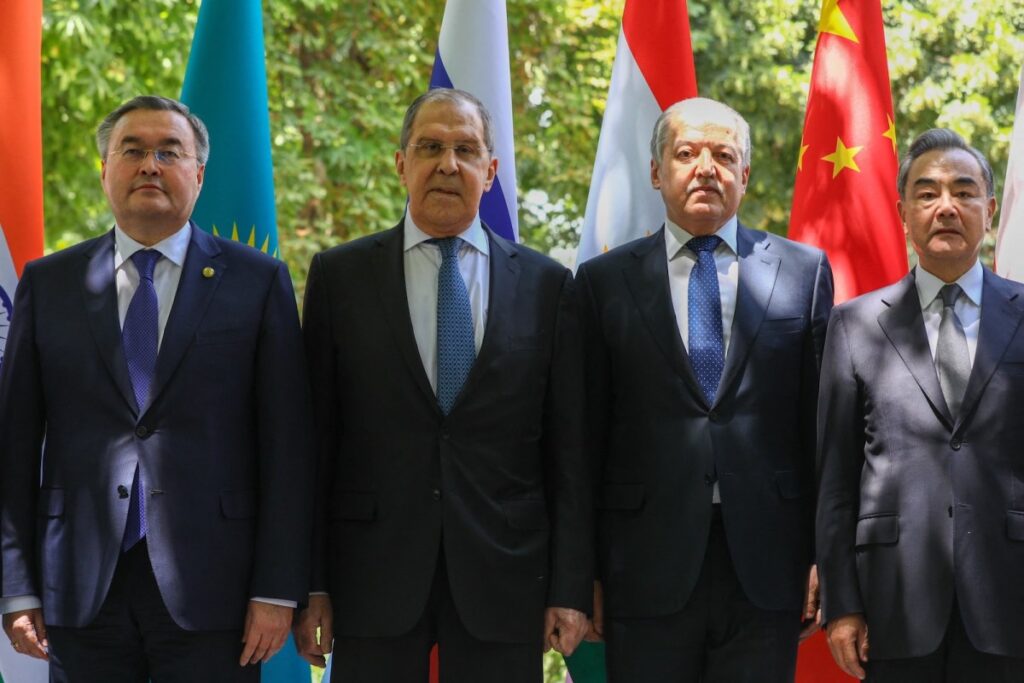 As for India, it has been a fellow traveler of the US bandwagon in Afghanistan all along and had a closed mind as regards the Taliban’s credentials as an autonomous Afghan entity. India enjoys excellent relations with the Afghan government headed by President Ashraf Ghani. (The Afghan army chief is expected in Delhi soon.)

Unsurprisingly, short of putting boots on the ground, India has taken a firm stand about the “legitimacy aspect” of the Taliban, which more or less corresponds to what Ghani has been saying, namely that the Taliban’s mainstreaming ought to be through a constitutional, democratic process.

Evidently, any expansion of the Troika to induct Iran and India would be a non-starter. Basically, the US is determined to be involved in Afghanistan, and the troop withdrawal will only mean rebooting of policies with greater emphasis on strengthening the ties with the Ghani government. Period. The regional states are yet to wake up fully to this reality.

US President Joe Biden’s administration has a compass to navigate the Afghan situation, with a default position buttressing a “forward policy.” The withdrawal of troops means that the danger of US fatalities is minimal in the period ahead.

This enables the US to go full throttle to try to prevent a Taliban takeover that would tarnish Biden’s reputation globally. Thus Washington is finessing a new working relationship with Ghani. 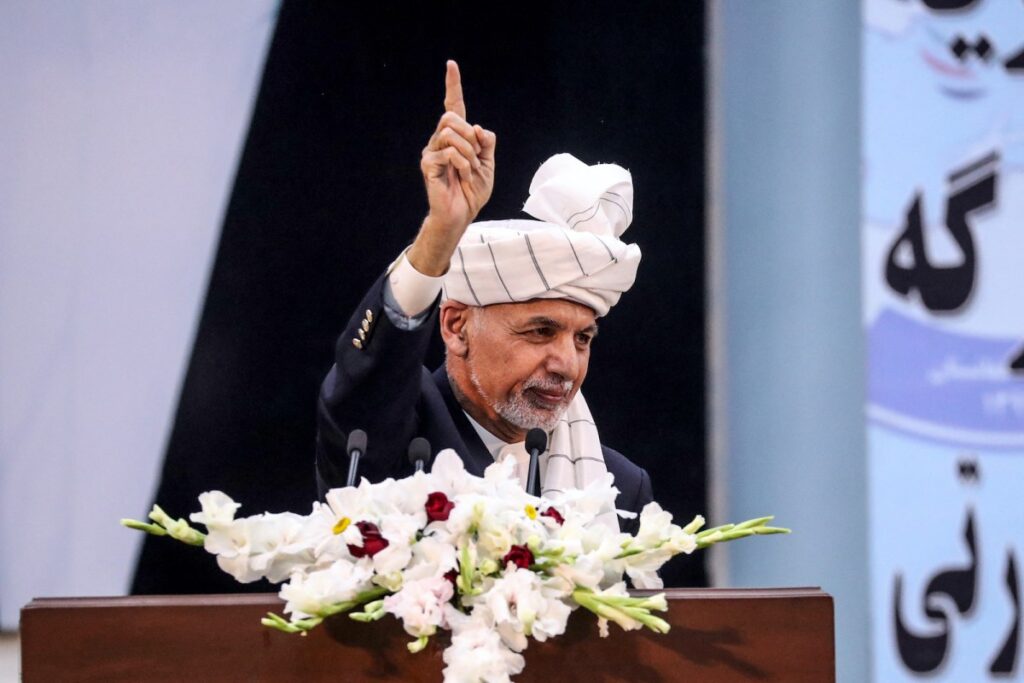 Afghan President Ashraf Ghani gestures as he speaks during the first day of the Loya Jirga, a grand assembly, at the Loya Jirga Hall in Kabul, August 7, 2020. Photo: Press Office of the President of Afghanistan / AFP
The US doubts the Taliban’s capability to overpower Afghan armed forces in the near term. This gives respite to recalibrate the US response. A ceasefire is not particularly necessary for the US at this point, as it may only work to the Taliban’s advantage in the prevailing circumstances. In fact, the US has resumed airstrikes against the Taliban.

Russia, China and Iran are in the US crosshairs and Washington’s future agenda is principally oriented to blocking Beijing’s Belt and Road Initiative (BRI), promoting regime change in Central Asia, using militant Islam as a geopolitical tool and consolidating a long-term presence in Afghanistan as a template of its Indo-Pacific strategy.

But the compass also has a default position. The newly created regional quadrilateral diplomatic platform of the US, Uzbekistan, Afghanistan and Pakistan, or Quad-2 (pairing with the US-led Quad in the Indo-Pacific) provides a framework to recalibrate policies in the event of a Taliban takeover, which the Pentagon still doesn’t rule out entirely.

A window of opportunity is opening for Washington to leverage the traditionally Western-oriented Pakistani elites and wean Islamabad away from Beijing’s embrace. Conceivably, the Quad-2 meshes with the new Global Infrastructure Initiative that the Group of Seven leaders meeting in Cornwall, England, on June 11-13 agreed on.

At any rate, the Quad-2 representatives issued a joint statement on July 16 predicated on their mutual consensus that “peace and connectivity are mutually reinforcing.” The leitmotif is China’s BRI, which the US perceives as potentially a hugely consequential geopolitical tool for Beijing in Afghanistan and Central Asia.

The US is reasonably certain that the Taliban will find the Quad-2 attractive as a platform to legitimize its regime and to source Western aid. 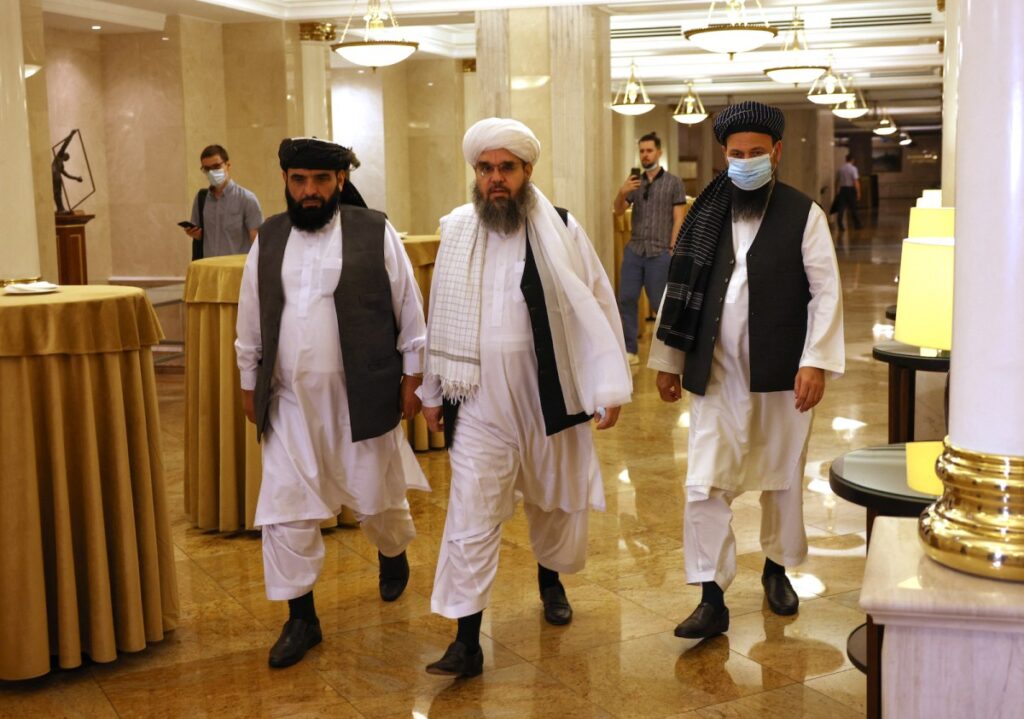 Taliban negotiators Abdul Latif Mansoor (right), Shahabuddin Delawar (center) and Suhail Shaheen (left) walk to attend a press conference in Moscow on July 9, 2021. Photo: AFP / Dimitar Dilkoff
Washington apparently kept Russia and China guessing and sprang a nasty surprise. Moscow is furious and has switched back to its own default position to accuse Washington of strategizing the use of militant Islamic groups as geopolitical tools. But that won’t embarrass Washington, as the Deep State is behind the Quad-2 strategy.

The US strategy stems out of the late British political geographer Halford Mackinder’s famous Heartland theory. And the role of Britain, which has excellent relations with both Afghan President Ashraf Ghani and Pakistani army chief General Qamar Javed Bajwa, is almost certainly there. As often in modern history, Britain provides the plot for Washington to act.

A report in The Daily Telegraph on July 13 quoted British Defense Minister Ben Wallace in an exclusive interview as saying, “Whatever the government of the day is, provided it adheres to certain international norms, the UK government will engage with it.”

Wallace recognized that the prospect of the UK working with the Taliban would be controversial, so he added the caveat: “What [the Taliban] desperately want is international recognition. They need to unlock financing and support [for] nation-building, and you don’t do that with a terrorist balaclava on. You have to be a partner for peace, otherwise you risk isolation. Isolation led them to where they were last time.”

Clearly, the Anglo-American compass has a default position to adjust to the Taliban takeover, which cannot be ruled out by any reckoning as things stand. The US, UK and the other Western powers hope to leverage the Taliban to work with them rather than against them in the Taliban’s own self-interest.

From all appearances, Russia is furious and has scrambled to circle its wagons on the diplomatic plane (here, here and here) as well as by way of countermeasures in military terms. Too little, too late? But then, Russia has a record of getting its act together only after the floodgates have opened.

Disclaimer: America’s real plan for Afghanistan - Views expressed by writers in this section are their own and do not necessarily reflect Latheefarook.com point-of-view