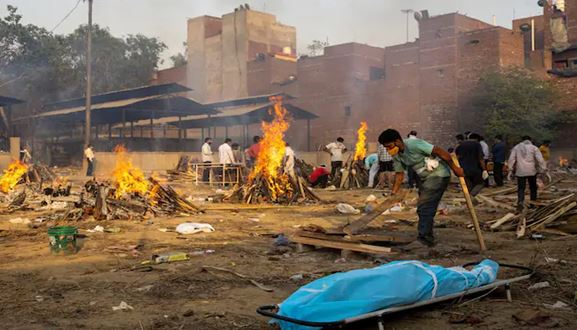 In 2020, it was the sight of millions of daily-wage workers walking on the national highways of India, fleeing the cities for their villages, that defined the covid-19 crisis in the country. Now, in 2021, the country’s blundering, callous and shortsighted response to a second wave is chillingly captured at overrun graveyards and cremation grounds.

The second wave of covid-19 is sweeping through India with the ferocity of an inferno; misplaced triumphalism, complacency and willful incompetence have brought us to our knees. And the official numbers — India just reported the world’s largest single-day spike, with more than 300,000 coronavirus cases over the last 24 hours and more than 2,100 deaths — do not even begin to tell us the truth.

In Surat, Gujarat, a cremation site that had been closed for 15 years was reopened because the city ran out of places to burn the dead. At the RamnathGhela funeral grounds, the iron bridges in the furnaces have melted and corroded from the round-the-clock pyres being lit on it. The undertakers at the grounds said they are burning at least a 100 bodies a day. The official numbers for the entire state in the same week placed the fatalities at 78.

In Ghaziabad, an industrial town not even an hour from New Delhi, I saw bodies wrapped in white sheets in the back of rickety old cars. It can take an entire day before space opens up for a cremation. I counted 20 bodies in a single hour, on a day when the official data placed the casualties at eight.

We may never know for sure how many lives are lost to the virus.

In cities across India, the tragedy is the same: Hospitals are turning away patients because they no longer have beds, oxygen is scarce, medicine is not available at pharmacies, ventilators are nowhere to be found and patients run out of money trying to get treated.

In this hour of national emergency, high-flow oxygen is the most critical shortage, since it is the only therapeutic treatment that helps patients live. Its absence has led to hospitals to petition courts for intervention and even beg for it online.

“It’s gold dust,” a doctor told me wryly, “everyone wants it and there’s none to be had.” Another doctor on the front line shared horrifying instances of patients having to share one concentrator between them as their oxygen levels plummeted.

Patients are asked to sign consent forms before admission to some hospitals, accepting the risk that they may die from insufficient supply of oxygen. It is the 2021 version of signing your own death warrant.

Inside a pediatric intensive care unit in Mumbai, I saw an 18-day-old infant strapped to a ventilator machine, trembling every few minutes from the impact of all the cables and gadgets plugged into her tiny frame. Nine of the 17 children admitted here since April 1 are seriously ill. SoonuAdani, a pediatrician, told me that “in 2020, children rarely needed to be hospitalized, now it’s very different.”

Many of those dying during this second wave seem much younger overall. At funeral sites, almost all the deaths I reported have been people under the age of 50; some were in their late 20s.

Through this carnage, in a galling example of tone-deafness, election rallies — mammoth gatherings in the hundreds of thousands — had not been canceled in the eastern state of West Bengal until just a few days ago. Even then, they were just scaled down and not scrapped.

The Modi government has made many fatal errors. It had no contingency in place for the pandemic’s second wave. The vaccine rollout was inexplicably slow. Bureaucrats dragged their feet on clearances of foreign-made vaccines, losing two critical months. So confident were they of having fought off the first wave that vaccines were exported or gifted to smaller countries, making people, including myself, feel a misplaced sense of pride when we could ill afford it.

But nothing was more galling than to see our politicians, including Prime Minister NarendraModi, continue to address political gatherings as people are dying and our hospitals are collapsing. Modi’s decisions to call off the campaign should have come much earlier.

It all hit home for me this week, as I rode with my father, a diabetes patient in his 80s, in an ambulance to the ICU. The severe crunch on the health system made my family decide to use a private ambulance. When it arrived, it had a one-man crew, the driver. There was no paramedic. It turned out that the single oxygen cylinder in the ambulance (which we had to use during traffic, which is made worse by the random barricades placed by the police to check whether citizens are breaking the lockdown) did not work. By the time we got to hospital, my father’s oxygen had fallen dangerously low.

It was my incredible privilege that allowed us to finally secure an ICU bed.

Then I thought of the countless families I have talked to in the past few weeks across India, who never even had that fighting chance.

In all our anger and grief, Indians deserve answers. There must be accountability. How did we get to this point?

Heads must roll. As a doctor told me: “when someone dies because you could not provide him oxygen, that is not a natural death; this is murder.”

Disclaimer: India is collapsing under a second wave of coronavirus. Callousness and incompetence are killing us. by BarkhaDutt - Views expressed by writers in this section are their own and do not necessarily reflect Latheefarook.com point-of-view