A recent survey of nearly 30,000 individuals by the Pew Research Center (‘Religion in India: Tolerance and Segregation’) suggests that most Indians respect religious diversity, and yet draw clear lines between communities when it comes to marriage.

More Indians see diversity as a benefit (53%) than view it as a liability (24%) for their country; the rest do not take a clear position. Again, 84% of Indians believe that respecting all religions is very important to being truly Indian, and 80% believe respecting other religions is a very important part of their religious identity (Chart 1). And yet, about two in every three Indians put a high priority on stopping interfaith and inter-caste marriages (Chart 2, Table 1).

“Indians do simultaneously express commitment to religious tolerance and a consistent preference for keeping their religious communities in segregated spheres — they live together separately. While people in some countries may aspire to create a ‘melting pot’ of different religious identities, our data suggest that many Indians prefer a country more like a patchwork fabric or thali, with clear lines between groups,” Jonathan Evans, primary project manager on the study, said in an email. 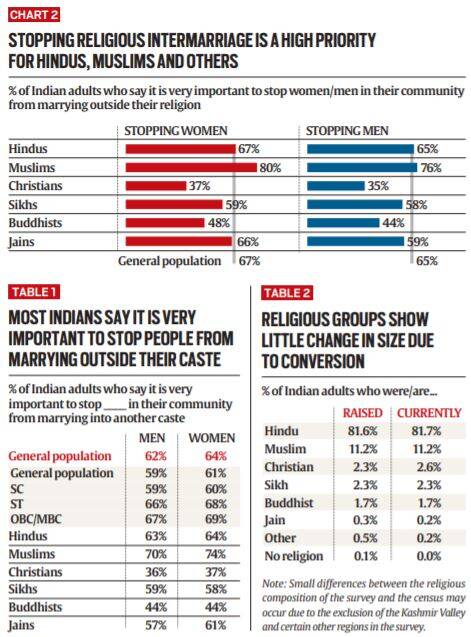 For all the new laws aimed at stopping inter-community marriages, the survey found very little change caused by conversion to the size of various religious groups among the respondents (Table 2). 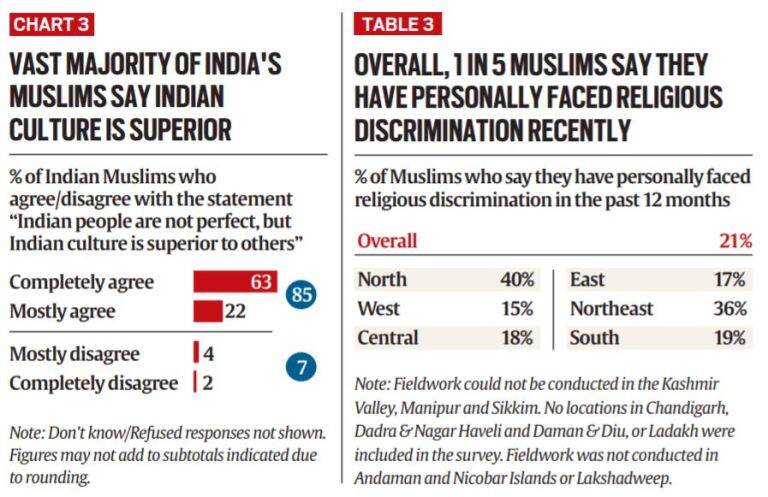 A majority of Muslims say they are against triple talaq, with women more opposed to it than men. The survey also found three-quarters of Muslims in favour of having access to their own religious courts for family disputes (Charts 4 & 5). 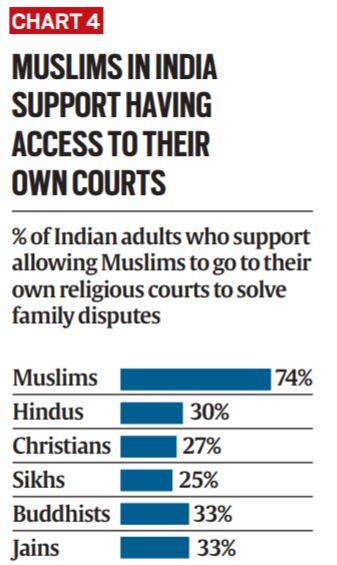 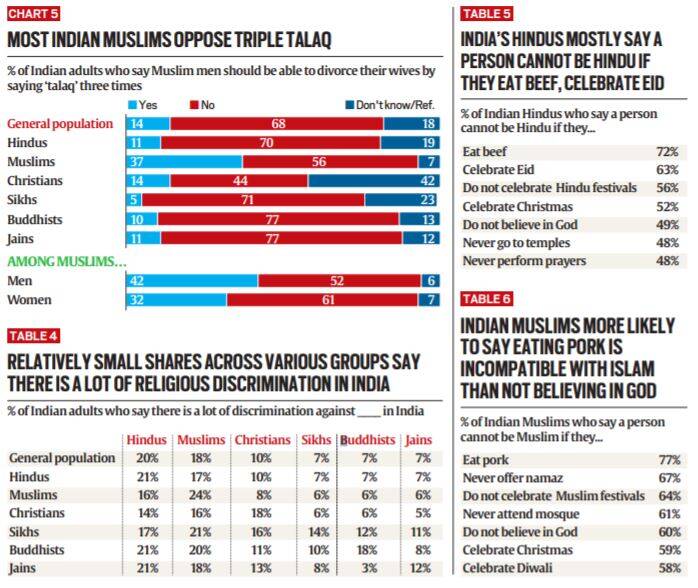 Being Hindu or Muslim

For most Hindus and Muslims, avoiding beef and pork respectively is central to their idea of who is truly Hindu or Muslim. 72% of Hindus say a person who eats beef cannot be Hindu; 77% of Muslims say a person cannot be Muslim if he or she eats pork (Tables 5 & 6).

A majority of both groups also says a person cannot be Hindu or Muslim, respectively, if they celebrate each other’s festivals.

The two groups diverge to an extent on religiosity as a marker on identity. The shares of Muslims who say namaz and visiting mosques are essential to being Muslim (67% and 61% respectively) are higher than the shares of Hindus who say a person cannot be Hindu if they don’t say their prayers or don’t visit temples (48% each).

Pratap Bhanu Mehta writes |The religious life of Indians, according to a recent survey

Six groups were targeted for oversampling: Muslims, Christians, Sikhs, Buddhists, Jains and those living in the Northeast. Sampling was conducted through a design that sought to increase diversity in religious representation.

When protests broke against the Citizenship Amendment Bill in December-January, the survey was in progress.

“…Tensions over the new citizenship law may have slightly depressed participation… by potential Muslim respondents. We also were unable to survey in the Kashmir Valley….” Evans said. “Still, the survey does represent the beliefs, behaviours and attitudes of around 95% of India’s overall Muslim population.”

Disclaimer: Explained: Religions in India, ‘living together separately’ by Kabir Firaque - Views expressed by writers in this section are their own and do not necessarily reflect Latheefarook.com point-of-view