Incidents of anti-Christian protests, ruckus and misdemeanour perpetrated by rightwing Hindutva organisations were reported both on news outlets and across social media in the lead up to and on Christmas Day, across states.

1. On Christmas eve, members reportedly belonging to the Rashtriya Bajrang Dal and other rightwing groups set an effigy of Santa Claus on fire in the middle of a street in Agra while shouting “Santa Claus Murdabad”.

According to a report in India Today, this was a protest against “using the ruse of Santa Claus during Christmas”. The main instigator appears to be one Ajju Chauhan, who reportedly said, “Santa [Claus] does not come bearing any gifts, his only goal is to convert the Hindus to Christianity. It’s not going to work anymore. Any attempt at conversion will not be allowed to succeed. If this is not stopped, then there will be agitations at missionary schools.”

In 2015, Ajju Chauhan, whose real name is Avnindra Pratap Singh, and who was then a senior Vishwa Hindu Parishad (VHP) leader, made headlines for organising a ‘ghar wapsi’ (return home) programme to convert ‘1,500 Muslim families’ to Hinduism. He was later reportedly sacked from the VHP after distributing pamphlets for a ‘Beti Bachao, Bahu Lao’ (‘save a daughter, bring home a daughter-in-law’) campaign. This movement was Chauhan’s purported rejoinder to the Sangh Parivar’s bogey of ‘love jihad’, which claims without evidence that Muslim men are involved in a conspiracy to convert Hindu women by marrying them.

At the time, Chauhan said, “Only Hindu girls are being targeted by Muslim youths in love jihad. They hide their Muslim identity, wear sacred threads on wrists, tilak on forehead and even recite Hanuman Chalisa to trap Hindu girls…We will teach them a lesson in their own language.”

2. In Chandmari district of Varanasi, Uttar Pradesh, a group of rightwing men carrying saffron flags protested outside the Matridham Ashram before a Christmas event was due to take place. The group of 20-30 people raised the “Jai Shri Ram” slogan, along with ‘Dharmantran band karo’ (stop conversion), ‘Church murdabad’ (death to the church) and ‘Isai missionariyo hosh mein ao’ (Christian missionaries come to your senses.)

Dr Anoop Shramik, a Dalit rights activist, took a video of the incident, which had blocked the road for about half an hour. He added that they were also saying “Missionary murdabad” (death to missionaries).

“People get scared seeing this kind of behaviour…This has become worse after the Anti-Conversion Law was passed in 2020,” he said.

Father Anand, a priest affiliated with the Matridham Ashram, concurred. “This is not even a church, this is an ashram, people of all faiths, castes and creed come here to pray and find peace. There has not been one single conversion here, like a baptism, nobody has changed their faith, people are still involved with the Hindu society.”

Fr Anand added that the event which takes place on Christmas Eve usually starts at 4 pm and continues till the next morning, but given the Uttar Pradesh curfew that had been announced, it had been conducted on a smaller scale for this year. Even so, it is a widely attended event, he says, and the demonstration in front of the Ashram gates caused the congregation tension and fear.

“The police had been informed of the event and were meant to be there in advance, but they were not there when this group came,” he said. He added that though the police were called when the event took place, they arrived only well after the miscreants had left. While the ceremony continued without any issues, he said, “This is a symbol of what is happening because these people have impunity, and it creates tension. The situation in UP is worse than in every other state. Every Sunday is a day of terror and trauma for Christians, especially those belonging to those small churches, like Pentecostal churches. Nobody is doing forced conversion, they do spread the gospel and teach, but there is no baptism or anything like that, people come, attend prayer and go back.”

Fr Anand says that the false narratives of forced conversion is a pretext for the saffron brigade’s terror tactics to be normalised. “They [the Christians] are the victims, and they are [made victims] again by the judiciary. FIRs are always written against the victims – the police stand with the perpetrators. It is indirectly state-sponsored violence.”

3. The conversion-by-Santa theme was voiced by a wing of the Bajrang Dal in Haryana, led by one Harish Ramkali who posted photographs on his Facebook account on December 23, saying that any school who would make a child dress as Santa Claus without the permission of their family would have a case filed against them and be closed.

He followed this up with a post on Christmas Eve saying that the Bajrang Dal had begun visiting and ‘noting’ down the names of schools, attaching an image of conversations with people who are presumably school authorities, and children wearing Santa hats. 4. In Kurukshetra, a group of zealots shouting slogans of ‘Jai Shri Ram’ took over a stage at a Christmas celebration and began to play the Hanuman Chalisa on the loudspeakers. A video of the event circulating shows the congregants leaving the church as a group took over.

5. On Christmas night, a statue of Jesus Christ in the British-Era Holy Redeemer Church premises in Ambala Cantonment, was torn down by two unidentified miscreants. Father Patras Mundu, the church priest told Times of India that the two had entered the church and vandalised it as well, breaking electrical fixtures. The Deputy Superintendent of Police Ram Kumar was reported saying that a case has been registered against the two unknown persons.

6. On Christmas day in Gurugram, a group of Hindutva fundamentalists entered a school in Pataudi organising a Christmas event and stormed the stage, where one member was videotaped saying, “We are not disrespecting Christians, but I will say to the next generation…follow the rules…do not go to any religion from greed or Indian culture will be destroyed. You need to take resolution to protect it…Take that resolution and chant ‘Jai Shri Ram’.”

The right wingers then led a series of slogans including ‘Jai Shri Ram’, ‘Sanatan Dharm ki Jai’ (Long live Hinduism) and ‘Adharm ka naash ho’ (May the irreligious be destroyed.)

Scroll.in reported that while the police were aware that the event had taken place, “No complaint has been filed. Everything is peaceful.”

7. In Assam, according to a report by NDTV, the Bajrang Dal was also involved in impeding the Christmas midnight mass celebrations in Silchar. The men allegedly forced their way into the church and demanded that the celebration be shut down as Hindus could not take part in the festivities. They claimed that they did not take issue with Christians celebrating Christmas but could not permit Hindus to do so as it was also ‘Tulsi Diwas’.

“We are not against Christmas… let only Christian celebrate Christmas. We are against Hindu boys and girls participating in Christmas function. Today it was Tulsa Diwas of Hindus, but no one celebrated. It hurts our sentiments… everyone is saying Merry Christmas. How will our religion survive?” one of the attackers (who was wearing a saffron cap) said in a video circulated online.

As with Gurugram, reports say the police said that as no complaint had been filed, no case had been registered, and that it was a ‘small commotion’ not needing a suo motu case.

Dr John Dayal, former president of the All India Catholic Union, said that the attacks on Christians were linked to the attacks against Muslims. 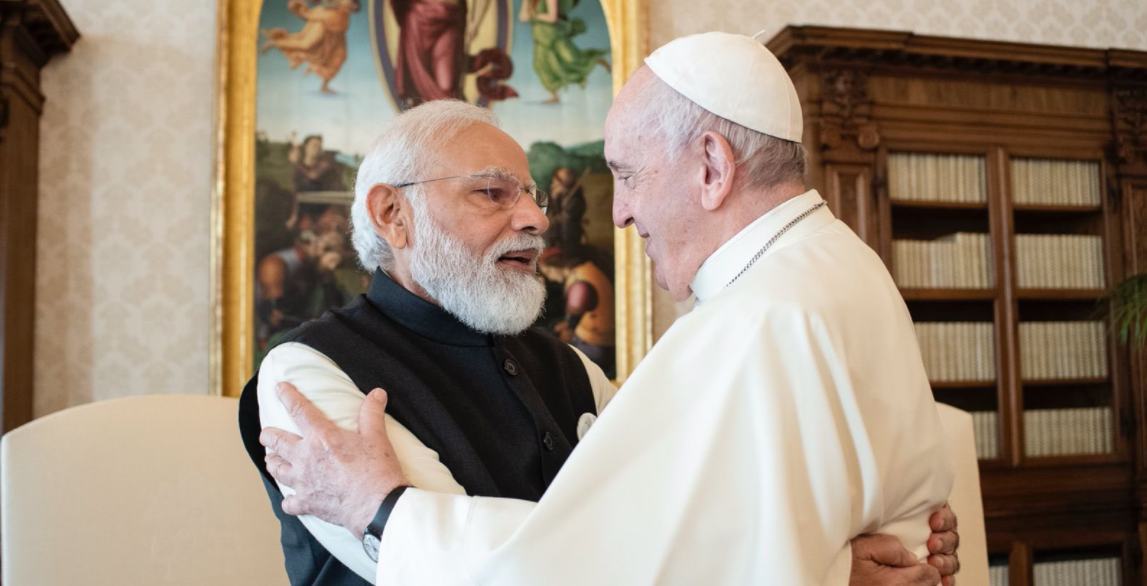 “Prime Minister Modi has been photographed with the Pope, and on his return, almost immediately, the Karnataka agitation started for formulating an anti-conversion law which has been passed by the legislature and is one of the most vicious acts of the 10 such acts that exist in various states in India, none of which have been unable to find any major mass conversion or any conversion of mass nature at all. A few places here and there have not stood the test of the courts – all these acts have utterly failed in proving the existence of forcible and fraudulent conversion in India. It has been so over three decades, since Orissa [now Odisha] created the first Act…you can say that the hype which has come up now with such vehemence implies a political agenda,” Dayal said.

Dayal went on to add that shops and malls have Christmas sales and visuals on display at this time. “They want to celebrate the commercial aspect of Christmas but don’t want Christmas to be there,” he added.

These are not individual acts of aggression, but a larger structural issue. “When state agencies arrest the pastor instead of people who attack him, what do we make of it? Do you think a constable or even an inspector would have the courage to stand alone, unless he has been told, unless he understands that the DCP, the commissioner and the home minister of the state are, they want this to happen?” he asked.

Disclaimer: Hindutva Brigade Disrupts 7 Christmas Events Across India - Views expressed by writers in this section are their own and do not necessarily reflect Latheefarook.com point-of-view