A faculty member talks with the students wearing hijab, after the school authorities denied them entry for wearing a hijab or scarf, in Kundapura of Udupi district, Saturday, Feb 5, 2022. Photo: PTI.

As the controversy over hijab continues to escalate in Karnataka, female Muslim students who have been disallowed from entering their schools are going through mental trauma and experiencing a sense of betrayal and discrimination from their friends and college management.

“First of all, we have lost our mental peace. Secondly, we fell out badly with many Hindu friends because of this issue,” Hazra Shifa, a student of Udupi government college, told The Wire.

It all began in December 2021, when six female students of Government PU College for Girls in Udupi were not allowed to attend classes wearing headscarves. Since then, many girls from different institutions have been going through a lot of mental stress as they stand up for their rights. They feel disappointed that their friends and classmates have “betrayed” them in their hour of need.

Speaking to The Wire, Shifa explains how she has been struggling mentally for over a month now.

“We can’t even concentrate on our studies. We are distracted. All these things keep coming to my mind. We are going through mental torture, which is not allowing us to study. Our teachers themselves are least bothered about our education. If they really cared, then they would have allowed us into classrooms until a decision is made.”

The girls have already filed a writ petition in the Karnataka high court regarding the matter, and have also approached the National Human Rights Commission. The students claim that their fundamental rights are being violated, as the college authorities banned them from attending classes wearing hijab.

“It’s really terrible that our own friends are opposing us. Our college has already spoiled our education, and now, they are ruining our relationship with our friends,” says Aliya Assadi from Udupi Government College.

The Hindu students say if Muslim students wearing hijabs are allowed, the colleges should also allow saffron shawls. On February 3, nearly 25 girls of Kundapur junior college were barred from entering the college premises. 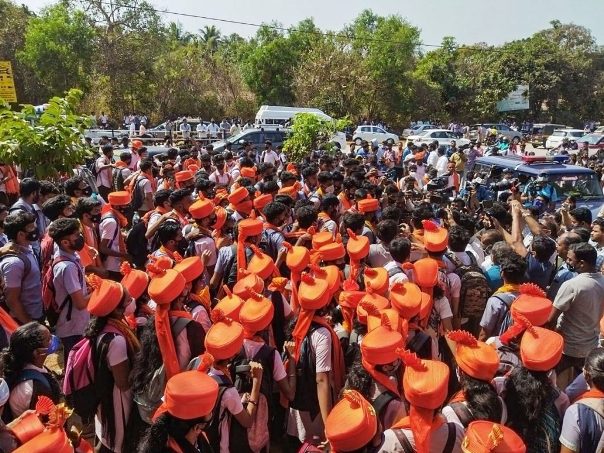 “Initially, Hindus were also with us, but now they have gone against us. They are not even speaking to us now. Earlier, these were the same girls who supported us. But now, it is really heartbreaking to see them turn against us. I really don’t know why they turned against us. But I hope this will not last long,” says Aliya, hoping that everything would get back to normal soon.

Eighteen-year-old Shifa is disappointed that the issue has created a gulf between her and her Hindu friends.

“Our friends have betrayed us and complained to the district collector by saying that because of us, their education is getting disrupted. Actually, we sit near the principal’s office and the classes are held in another building. I don’t know how they are getting distracted. Our college has turned them against us and provoked them. The whole college has turned against us,” laments Shifa.

Aliya and Shifa have always been at the forefront of the protests.

Thehreen, a student of Kundapur government college, told The Wire, “All the classmates, including the boys (who wore saffron shawls), used to talk nicely. But one day when they wore saffron shawls to protest against us wearing hijab. We felt backstabbed by our own friends and classmates. From our side, we never had problems with them – they can wear whatever they want.”

On February 5, the Karnataka government’s Department for Pre-University Education invoked Section 133 (2) of the Karnataka Education Act 1983, ordering a ban on clothes that “disturb equality, integrity and public order in schools and colleges”. The clause states that “a uniform style of clothes has to be worn compulsorily”. However, private school administration can choose a uniform of their choice.

Speaking to The Wire Aliya has said, “Hindu girls come to colleges with bindis. Let them keep it, we don’t have any problem. But no one asked them why they are coming to college with a bindi because that is also a religious symbol. If they can put bindi, why can’t we wear hijab? Our teachers also even asked us to wear bangles, saying it’s our culture. But now when it comes to us, we have to compromise. Otherwise, we will have to face discrimination.”

Meanwhile, on Monday, February 7, several students wearing hijabs were allowed inside Kundapur PU College but were seated in separate classrooms. 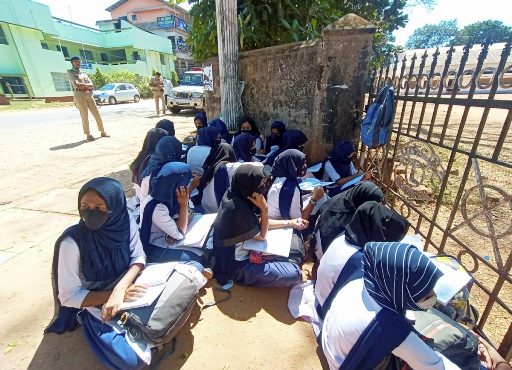 Kundapura: Students wearing hijab sit outside their school as the school authorities denied entry for wearing a hijab or scarf, in Kundapura of Udupi district, February 4, 2022. Photo: PTI.

Thehreen recalls that on that day, no teacher had come to them to take classes. “They made us sit in separate classrooms and made us feel like we are some criminals. The teachers didn’t even come to see us.”

Stating that they have always worn hijab, Shifa says, “It is unfair that some students are wearing saffron shawls only to oppose us.”

Also read: Hindutva Bigotry Lies Behind the Attack on Hijab-Clad Students in Karnataka

In the past week, the issue has intensified across the state, with several colleges banning the headscarves worn by Muslim women to colleges.

On February 8, the Karnataka government had announced its decision to shut down high schools and colleges for three days to “avoid any further unrest” in the state over the ongoing row.

Several leaders from across the country and around the globe, including Congress leaders Rahul Gandhi, Priyanka Gandhi and Shashi Tharoor; AIMIM’s Asaduddin Owaisi; Nobel laureate Malala Yousafzai have come out in support of the girls’ right to wear a hijab. They have asked authorities not to deprive them of education just wearing a headscarf.

Speaking to The Wire, Umaira Banu, a women’s activist from Mangalore, says, “This coastal region of Karnataka has always been a hotbed of Hindutva communal politics. But when we used to study, there were no such rules or opposition if we wore a shawl on our head. We had friends even from other communities, like Christians and Hindus. They respected our sentiments. But this incident has created communal tension, and it’s really horrific to see that such things are happening in Karnataka.”

“Muslims are always targeted for one thing or the other. But when you see the entire picture, one can conclude that some are deriving political mileage out of it. They want to divide us, as Muslims and Hindus,” she says.

Many organisations have come out in support of the girls wearing hijab and extended solidarity through protests. The protests have been taking place in different parts of the state and across the country, including in Bengaluru, Bhadravathi and Mysore in Karnataka, along with Hyderabad and Kolkata.

Amid this chaos, one Muskan – a girl student from PES College of Arts, Science and Commerce, Mandya – emerged on the national scene after a video showing her bravely resisting a group of Hindu men wearing saffron shawls who heckled her by shouting ‘Jai Shri Ram’ slogan went viral.

Speaking to The Wire, Muskan’s father Hussain Khan says, “When she went near the college, she called and told me that there’s some uproar. I told her not to worry and just go bravely inside.”

“Few girls who were wearing burqas were stopped at the gate and were crying outside. The principal came and took them in. Muskan was also stopped at the gate by those men. They intimidated her and screamed ‘Jai Shri Ram’ in her ears. While she parked her bike, they were still chanting religious slogans, so she countered them back and shouted ‘Allahu Akbar‘ (God is great).”

Later, Hussain says, he went to the college and spoke to the principal. “He was very supportive and assured me to take action against the men wearing saffron shawls. I also told him if he can’t provide security to my daughter, then I will shift her to another college. But he has guaranteed to look into this matter.”

According to Muskan’s father, the authorities were unaware of the boys, who “barged into the college” wearing saffron shawls and chanted religious slogans.

Disclaimer: 'We Have Lost Our Peace, Can't Study': Muslim Students Feel 'Betrayed' Over Hijab Ban - Views expressed by writers in this section are their own and do not necessarily reflect Latheefarook.com point-of-view