On 72nd Anniversary of Indian Constitution 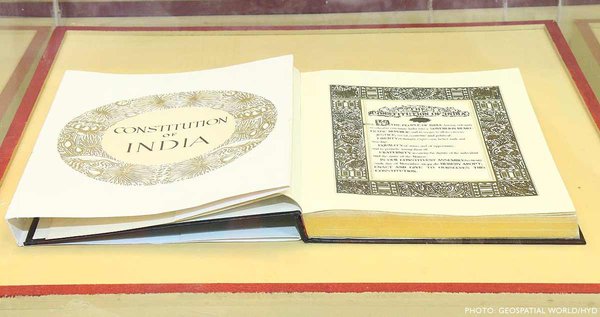 The Constituent Assembly (CA) of India passed the Constitution on November 26, 1949 after almost 3 years’ deliberations. It was an amazing contribution in the history of the modern liberal democracies as it was not only the lengthiest constitution in the world history (underlining the fact that the polity it was to govern was diverse and vast) but also created a polity based on egalitarian, democratic and non-sectarian ideals never attempted in the past in non-Western world. This commitment was explicit in the Preamble of the constitution which read:

“WE, THE PEOPLE OF INDIA, having solemnly resolved to constitute India into a SOVEREIGN SOCIALIST SECULAR DEMOCRATIC REPUBLIC and to secure to all its citizens:

EQUALITY of status and of opportunity; and to promote among them all;

FRATERNITY assuring the dignity of the individual and the unity and integrity of the Nation;

IN OUR CONSTITUENT ASSEMBLY this 26th day of November 1949, do HEREBY ADOPT, ENACT AND GIVE TO OURSELVES THIS CONSTITUTION.”

The two ideals namely Socialist and Secular added in 1977 only strengthened the resolve of the CA that India was going to be a non-sectarian polity with the people of India in thoughts. It is shocking that the RSS which has complete sway over the Indian politics through its political appendage, Bhartiya Janata Party and its cadres loaned to the latter (like PM Modi) mourned the birth of Indian Constitution. The RSS was very angry when Indian Constituent Assembly adopted a democratic-Secular Constitution under the supervision of Dr. BR Ambedkar. We know that the Constituent Assembly of India passed the Constitution on November 26, 1949, the RSS organ Organizer came out with an editorial on November 30, 1949 titled ‘Constitution’ declaring :

“The worst about the new Constitution of Bharat is that there is nothing Bhartiya about it…There is no trace of ancient Bhartiya constitutional laws, institutions, nomenclatures and phraseology in it…Manu’s Laws were written long before Lycurgus of Sparta or Solon of Persia. To this day his laws as enunciated in the Manusmriti excite the admiration of the world and elicit spontaneous obedience and conformity. But to our constitutional pundits that means nothing.”

How RSS denigrates the Constitution of India can be known by the following statement of the most prominent ideologue of the RSS, Golwalkar:

“Our Constitution too is just a cumbersome and heterogeneous piecing together of various articles from various Constitutions of the Western countries. It has absolutely nothing which can be called our own. Is there a single word of reference in its guiding principles as to what our national mission is and what our keynote in life is? No!”

By demanding Manusmriti as constitution of India, RSS, in fact was following the belief of its darling Hindutva icon, VD Savarkar who had declared long back:

“Manusmriti is that scripture which is most worship-able after Vedas for our Hindu Nation and which from ancient times has become the basis of our culture-customs, thought and practice. This book for centuries has codified the spiritual and divine march of our nation. Even today the rules which are followed by crores of Hindus in their lives and practice are based on Manusmriti. Today Manusmriti is Hindu Law”.

Faith of RSS brass in Manusmriti, naturally, leads them to believe in Casteism too which gave birth to the debased practice of Untouchability. For RSS Casteism is the essence of Hindu Nationalism. Golwalkar did not mince words in declaring that Casteism was synonymous with the Hindu Nation. According to him, the Hindu people are none else but,

“The Hindu People, they said, is the Virat Purusha, the Almighty manifesting Himself. Though they did not use the word ‘Hindu’, it is clear from the following description of the Almighty in Purusha-Sukta [in the 10th book of Rig Ved] wherein it is stated that the sun & the moon are His eyes, the stars and the skies are created from his nabhi [navel] and Brahmin is the head, Kshatriya the hands, Vaishya the thighs and Shudra the feet. [Italics as in the original text] This means that the people who have this fourfold arrangement, i.e., the Hindu People, is [sic] our God. This supreme vision of Godhead is the very core of our concept of ‘nation’ and has permeated our thinking and given rise to various unique concepts of our cultural heritage.”

What kind of a Hindutva civilization the RSS wants to build by enforcing the laws of Manu, can be known by having a glimpse of the laws prescribed by Manu for the lower castes, Untouchables and women. Some of these dehumanizing and degenerated laws, which are presented here, are self-explanatory.

A selection of Laws of Manu denigrating Dalits/Untouchables

As per the Manu Code if Sudras are to be given most stringent punishments for even petty violations/actions, the same Code of Manu is very lenient towards Brahmins. Shloka 380 in Chapter VIII bestowing profound love on Brahmins decrees:

“Let him never slay a Brahmana, though he have committed all (possible) crimes; let him banish such an (offender), leaving all his property (to him) and (his body) unhurt.”

A selection of Laws of Manu demeaning Hindu women

[The above selection of Manu’s Codes is from F. Max Muller, Laws of Manu, LP Publications, Delhi, 1996; first published in 1886. The bracket after each code incorporates number of chapter/number of code according to the above edition.]

The reproduced parts of the Manu Code above need no further elaboration and commentary. They are too glaringly venomous, Fascist and degenerated against Untouchables who are referred to as Sudras by Manu. Perhaps this was the reason that the German philosopher, Friedrich Nietzsche who contributed immensely to the growth of totalitarian ideas in Europe in the 20th century, fell in love with this work.

It is to be noted here that a copy of Manusmriti was burnt as a protest in the presence of Dr. BR Ambedkar during the historic Mahad agitation on December 25, 1927. Dr Ambedkar called upon Dalits to commemorate December 25 as the Manusmriti Dehen Diwas (Manusmriti burning day) in future. In fact, the Brahmanism as basis of the RSS world-view is the original Fascism in the history of human civilization.

It is true that when RSS faced the wrath of the Indian State when Sardar Patel was the home minister of India it criticized the detention laws without trial. In an editorial in Organizer it wrote:

“Section 21 and 22 providing for detention without trial reduce all the wordy assurances about liberty, equality and fraternity to just near meaningless verbiage.”

But once in power the RSS-BJP rulers led by PM Modi have returned to Hindutva’s Fascist and Nazi heritage. They have converted Indian democratic-secular polity into a totalitarian Hindutva oligarchy where any kind of dissent is treated as anti-national and anti-Hindu. It is the continuation of hatred for democracy as decreed by Golwalkar as early as 1940. Golwalkar while addressing the 1350 top level cadres of the RSS declared:

“RSS inspired by one flag, one leader and one ideology is lighting the flame of Hindutva in each and every corner of this great land.”

Disclaimer: RSS mourned when Indian Constituent Assembly passed democratic Constitution By Shamsul Islam - Views expressed by writers in this section are their own and do not necessarily reflect Latheefarook.com point-of-view