French President Emmanuel Macron has declared war on Islam and Muslims in France and turned the so called war on terrorism into war on Islam and Muslims.
He recently declared that “Islam is a religion that is in crisis all over the world today, we are not just seeing this in our country”. Thus he seeks to “liberate” Islam in France from foreign influences by improving oversight of mosque financing ‘.

However many commentators said “it is not Islam that is in crisis. It is Macron and his government”.

Macron is not the first French ruler who wanted to “liberate” Islam. French Christian and so-called ‘secular’ hatred of Muslims is part of everyday speech by the French government, the pundits, and the media.

In an unprecedented campaign against Muslim communities, human rights defenders and progressive groups said, French authorities have crossed every red line they could think of. They prefer to dedicate their efforts to stigmatising Muslims, criminalising dissent and going on a witch hunt against anyone who dares speak truth to power

By placing the whole infrastructure of Islamic institutions under surveillance, France is seeking to strip Muslims of the possibility of independent self-organisation outside the state’s control .The transformation of the ‘war on terror’ into a ‘war on Islamism’, then a ‘war on separatism’, marks a truly historic illiberal regression in the culture, politics and society of France
Under Macron, France has moved towards a truly eradicationist approach towards groups or organisations labelled, usually gratuitously, “Islamist” or “radicalised”.
In fact what the French need to do is to pay back the debts they owe to all those whom they robbed and killed around the world . Only that will end France’s crisis with “Islam” and with itself.
The Islamophobic state has since 2018 launched more than 26,000 investigations targeting everything from Muslim businesses, to schools, to mosques. It has permanently or temporarily shut down more than 800 facilities, and seized more than €55 million ($55m).

Columnist Ravan Ferschi said president Macron’s ‘values’ are worryingly close to the model of repression used by the UAE to combat the so called ‘political Islam’. France, like its ally, also uses any tool at its disposal to stifle dissent, and has designed a new institution to provide religious cover for its injustices

Reiterating this columnist Joseph Massad said ‘Macron is not the first French ruler who wanted to ‘liberate’ Islam. This is an old French “secular” tradition. When Napoleon Bonaparte invaded Egypt and Palestine in 1798, his clever plan was to lie to the Egyptians by announcing that he and his army were “faithful Muslims” and that they came to liberate Muslims and Islam from the tyranny of the Mamluks.

Indeed, Macron’s government has criminalised entire Islamic trends and schools of thought, resolutely moving like no previous postwar administration into the domain of thought and belief control (exclusively of the Muslim variety). These developments are alarming not only for the future of Muslims in France, but for the rule of law in general. Two complementary trends of state Islamophobia can be observed in the Macron era, targeting both public and private life.

Under Macron, all the logics and processes of what should be called the New French Islamophobia have been perfected, intensified and generalised: the construction of the “Islamist” bogeyman, the authoritarian disciplining of Muslims, the pathologisation of religious norms, the securitisation and neocolonial management of Islam, the denial that Islamophobia even exists, and the systematisation of state surveillance and repression of Islamic institutions.

Columnist Hossam Shaker pointed out that France is losing its global reputation and soft power, with its image now linked to provocation, hate speech and moral humiliation .Macron has continued the insensitive tradition of his predecessors by singling out Islam in the discourse around religious fundamentalism, linking the religion to terrorism and extremism, and introducing a new inflammatory term: “Islamic separatism”.

At the time, western leaders were choosing their words with extra care in the wake of Arab Spring. Macron, however, belongs to a newer political era, after authoritarian rule was re-established in Arab countries that witnessed uprisings. Ironically, France rolled out the red carpet to some of these tyrants after they crushed democracy in their own countries.

Meanwhile a French cartoon has caused outrage on social media for its “racist and Islamophobic” portrayal of the Qatar national football team ahead of the World Cup in Doha
Published last month by the French newspaper Le Canard enchaîné, the caricature uses stereotypical depictions of Arab men as long-bearded, angry, masked and carrying all kinds of weapons from machetes and guns to rocket launchers. A player with the famous number 10 shirt was portrayed wearing a suicide vest.

As a result Muslims are fleeing France in ever-greater numbers, facilitating a significant brain drain and damaging France’s soft power. This is a regrettable loss to the nation, which could have used their voices and perspectives in numerous areas of international relations, business and diplomacy. 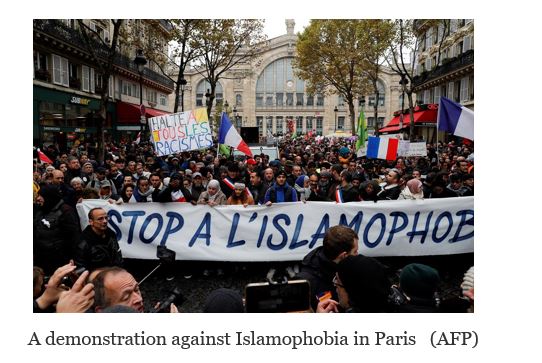 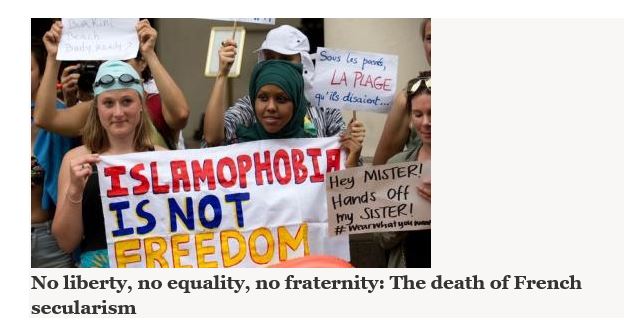 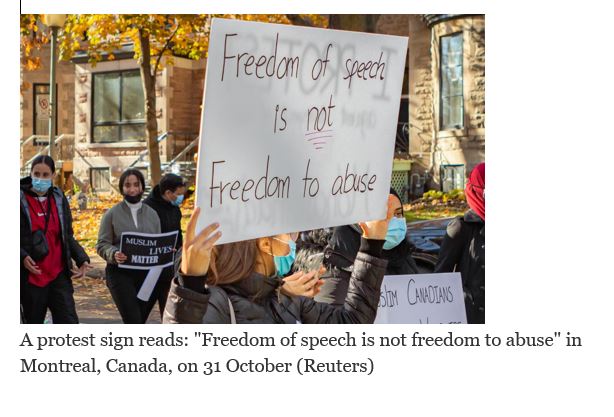 Continues unabated under Macron’s “French Islam”. - Views expressed by writers in this section are their own and do not necessarily reflect Latheefarook.com point-of-view