Skip to content
9/11
Spread the love
US President Joe Biden delivers remarks at a ceremony commemorating the 21st anniversary of the 11 September attacks at the National 9/11 Pentagon Memorial on 11 September 2022 in Arlington, Virginia (AFP)
For more than two decades, American leaders have used the 11 September commemoration to legitimise an endless ‘war on terror’

Each year on the anniversary of the 9/11 attacks, Americans are urged to #NeverForget that fateful day in 2001 when nearly 3,000 people were killed at the World Trade Centre.

To ‘never forget’ means to firmly sustain the narrative of US victimhood, and to justify all manifestations of its vengeance under this guise

Through carefully selected words, US presidents have successively offered consolation to the American people, particularly those who lost loved ones that day.

Their speeches, offered as ritual mourning, however, are always part of a larger, political message – one rooted in violence and continually reproducing US claims used to legitimise the war on terror.

Last year, in a video message by US President Joe Biden to commemorate the 20th anniversary of the 9/11 attacks, he said: “Unity and service. The 9/11 generation is stepping up to serve and protect in the face of terror, to get those terrorists who are responsible to show everyone seeking to do harm to America that we will hunt you down and we will make you pay. That will never stop today, tomorrow, ever from protecting America.”

Biden has stayed true to his word. But rather than targeting the “terrorists”, he maintained the legacy of his predecessors who have made millions of Muslims domestically and across the globe “pay” so that the US could protect its facade of security.

On the 11 September anniversary this year, Biden delivered a speech at a memorial ceremony at the Pentagon in which he explicitly justified the extrajudicial assassination of Ayman al-Zawahiri in August.

To this end, Biden said, “It took 10 years to hunt down and kill Osama bin Laden, but we did. And this summer, I authorised a successful strike on Zawahiri, the man who bin Laden – was his deputy on 9/11 and was the leader of al-Qaeda. Because we will not rest. We’ll never forget. We’ll never give up. And now, Zawahiri can never again threaten the American people.” Biden’s words shouldn’t be merely read as a legitimisation of his extrajudicial assassination of al-Zawahiri, but as part of something much larger – the cumulative violence that has led to this moment – including the expansion of executive authority and the wanton and brutal tactics of the war on terror.

This violence has become so normalised that after 21 years these actions are simply par for the course – a course paved with Islamophobia and the dehumanisation and disposability of Muslims.

Instead of acknowledging this violence against Muslims who were subjected to profiling, detention, torture, and mass murder for more than two decades since the attacks, US leaders have been gaslighting them while perpetuating policies of collective guilt and punishment.

In other words, to “never forget” means to firmly sustain the narrative of US victimhood, and to minimise, justify, and effectively shelter all manifestations of its vengeance under this guise.

In addition to annual official ceremonies, countless 9/11 memorials were consecrated not just in the US, but in major cities around the world, conferring special status to US victims of foreign violence.

A petition on the website of the Ground Zero-based 9/11 Memorial and Museum asks visitors to sign a pledge to never forget, by specifically agreeing to the following: “to remember the 2,983 innocent people killed on 11 September 2001 and 26 February 1993…to honour those who risked their lives to save others…to remember how our resilience and strength allowed us to rise as one…to share the stories of 9/11 with future generations.”

This pledge and other intentional efforts to cultivate and foster a particular version of Americans’ collective memory relies on an understanding of 9/11 that precludes the possibility of remembering everything that came after. It, thereby, suspends and holds history hostage as though little else has happened in the last 21 years. So, we must ask: whose job is it to remember the people who were killed because we will never forget? 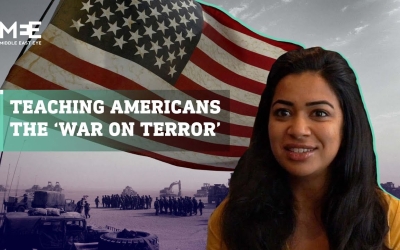 9/11 attacks: Why young Americans know nothing about the ‘war on terror’

In 2002, during the 9/11 commemoration at the Pentagon, then-President George W Bush stated that those who died “did not die in vain” and that their deaths had “moved a nation to action…What happened to our nation on a September day set in motion the first great struggle in a new century.”

Bush’s answer to ensuring that those killed in the 9/11 attacks did not die in vain was the war on terror – a war that has sacrificed Muslim life to prove the value of others.

Since launching the war on terror, the US has killed hundreds of thousands of Muslims across the globe. The Costs of War project estimates that between 184,382 and 207,156 Iraqi civilians were killed during the US war on Iraq, with a note that the numbers are probably much higher – a result of inaccurate counts by the Iraqi government and the US-led coalition.

The US war on Afghanistan has also led to a massive loss of life – with at least 70,000 civilians killed since 2001.

Dimensions of the war on terror

There has been no shortage of violence in countries such as Somalia – a longtime victim of US militarism – and Yemen, a country that the US has participated in destroying by proxy.

This is just one of the dimensions of the war on terror that has unleashed colossal state violence on Muslim communities. There are four others that I outline in my book, Innocent Until Proven Muslim: Islamophobia, the War on Terror, and the Muslim Experience Since 9/11, which are critical to understanding the totality of the war’s death and destruction.  ​​​​

The other dimensions of the war on terror have included and continue to be defined by draconian immigration policies, surveillance, federal terrorism prosecutions, and detention and torture – all of which have created a state of fear – indeed terror – and precarity for Muslims caught in the crosshairs of the war and those witnessing its effects and aftermath.

Some might argue that it’s insensitive to raise the issue of violence against Muslims on 9/11, yet there has never been a reckoning for the devastation unleashed in the name of its victims.

In fact, the US government and its leaders have managed entirely to evade accountability. The crimes of the past two decades, including illegal wars, torture programmes, drone strikes on wedding ceremonies, and extrajudicial killings of American children, have faded from public memory. Former presidents who lied to invade countries or joked to aides that they are “really good at killing people” have managed to become breakfast television.

In a recent tweet from the 9/11 Museum and Memorial, they ask people to take pictures on the anniversary of the attacks of the sky above them to “underscore the way it connects us all,” using the hashtags #NeverForget and #RemembertheSky.

What may seem like an innocuous campaign, however, takes on a more violent character when one considers the way the US has ruined skies for other people. A young Pakistani boy named Zubair told Congress in a 2013 hearing that “I no longer love blue skies. In fact, I now prefer grey skies. The drones do not fly when the skies are grey.”

The United States has long claimed that the war on terror has always been about justice, but what is the threshold of injustice that can be committed to obtain justice?

Dr. Maha Hilal is a researcher and writer on institutionalised Islamophobia and author of the book Innocent Until Proven Muslim: Islamophobia, the War on Terror, and the Muslim Experience Since 9/11. Her writings have appeared in Vox, Al Jazeera, Middle East Eye, Newsweek, Business Insider and Truthout, among others. She is the founding executive director of the Muslim Counterpublics Lab, an organizer with Witness Against Torture, and a council member of the School of the Americas Watch. She earned her doctorate in May 2014 from the Department of Justice, Law and Society at American University in Washington, DC. She received her Master’s Degree in Counseling and her Bachelor’s Degree in Sociology from the University of Wisconsin-Madison.

Disclaimer: 9/11 anniversary: When ‘never forget’ is used to justify the ‘forever war’ by Maha Hilal - Views expressed by writers in this section are their own and do not necessarily reflect Latheefarook.com point-of-view