Amidst the silence and secrecy of Thursday 24 February 2022 night the minaret,  arch, at the entrance to Daftar Jailani was demolished using baco heavy equipment, as stated in the media. No doubt this was a planned high handed vandalism dismissing the rights of peaceful Muslims.

No one knows who committed this crime, but everyone can guess who the culprit was. Shocked Muslims responded swiftly when 26 of their organizations condemned the vandalism in one voice.

When contacted by Muslim weekly Vidivelli, Ven Vathukumbure Dammaratne Thero who is in charge of the Kuragala Sacred Land said “the road towards the Kuragala mosque where the minaret was located is not necessary and thus there is no problem in removing the minaret.”

The road may be of no use to him but it is, together with the minaret, important to Muslims as part of their heritage. The question is why the venerable monk who calls Muslims for discussions did not discuss such a move with Muslims in advance?

In the interview Ven Vahukumbure also requested that he should not be provoked. To provoke him Muslims never destroyed a Sinhalese monument. Instead it is the Muslim symbol of minaret which was destroyed.

For example days after the cremation of a 20 day old Muslim baby without any justification, this was the main topic of discussion at the grand mosque in Nigeria in the west coast of Africa.

This vandalism comes at a time when construction work on a Buddhist temple complex in Kuragala is nearing completion. This project  has the   support and patronage of President Gotabhaya Rajapaksa who time and again states that his government was elected to power by Sinhala majority votes and thus he has an obligation to serve them.

However there is also the need to   protect other communities’ heritage.

Number of  religious ceremonies were held at the newly built temple complex at Kuragala attended by politicians, top government officials, army commander and other prominent people. This included the opposition leader Mr. Sajith Premadasa together with his mother Mrs Hema Premadasa and others.

That is the support Ven Vathukurumbure Dhmmaratne Thero enjoys. Muslims are in possession of all historic records highlighting their right to the rock cave. However there is no one they could turn to. This is the sad state of affairs in the country now.

In the midst he is demanding that the mosque near the cave to be removed. This shocking move infringes the rights of Muslims.

In the run up to the opening of the complex numerous video clips started to emerge, some suggesting the Kuragala sacred area has been liberated from Muslims. One such video titled “Muslim Akramanaya” in Sinhalese poisoning Sinhalese minds against Muslims, appeared but went off the air few days later.

Is there any need to drag Muslims into any unnecessary controversy?

Once sleepy Kura gala area has become hive of activities though the racist media, used by interested political forces to demonize Muslims, ignored both the construction and the opening of the complex.

This comes at a time  when Sri Lanka, shining example for the entire third world for political and economic stability, communal harmony and   peace during the time of its independence in 1948, is now on the verge of economic collapse, political instability, foreign debt, shortage of food, fuel ,gas and numerous other items forcing people to come to streets causing social unrest threatening the country.

Under this gloomy circumstance what is the need to continue the disastrous hate Muslim campaign to poison Sinhalese minds against Muslims which is not in the interest of the two communities and the country as a whole?

The hate Muslim campaign which began in the aftermath of the defeat of ethnic war in May 2009  continues to date unabated.

What the racist elements failed to understand is that Muslims are not here in the country on tourist visas. They are as legitimate sons and daughters of this country as the others.

They too have a more than 1200 year old history which cannot be erased. During this period they not only got along well with Sinhalese kings who were not racists, but made significant contributions for the development of the country.

Even during the time of the independence Muslims voted for the independent bill though it was detrimental to their interest. In response, S.W.R.D. Bandaranaike assured that the Muslim interest will be looked after. Now we can see how the present generation is looking after their interest.

What the anti-Muslim elements failed to realize is that Sri Lankan is undivided one country today only because of the great sacrifice and sufferings of the Muslims in the north and east of the island.

The ongoing hatred and violence against Muslims began ever since the country was opened to regional violent anti-Muslim forces like RSS front BJP government in India and Israel, godfathers of terrorism, and the main architect of the ongoing global campaign demonizing Islam and Muslims.

Sri Lanka is a multi-racial, multi religious, multi lingual and multi-cultural society which is a blessing enriching this island’s rich heritage. Therefore the island nation can ill afford to get involved with disastrous forces such as Israel and Hindutva forces.

Unity and understanding among communities is extremely indispensable if we are to uplift the country from the current mess caused by racist politics which only benefitted handful of politicians and their catchers.

Well known cricketer Kumar Sangakkara recently said “No one in Sri Lanka can be marginalized or threatened or harmed due to their ethnicity or religion. We are One Country and One people. Love, trust and acceptance should be our common mantra. No place for racism and violence. STOP. Stand together and stand strong”.

This message should reach the racist politicians and their sidekicks who refused to open their eyes even today. 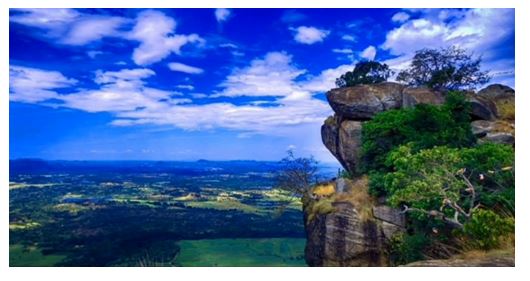 Rock where Islam’s saint of saints Abdul Qadir Jailini was believed to have meditated during the years when he disappeared from Baghdad-once the international seat of learning. 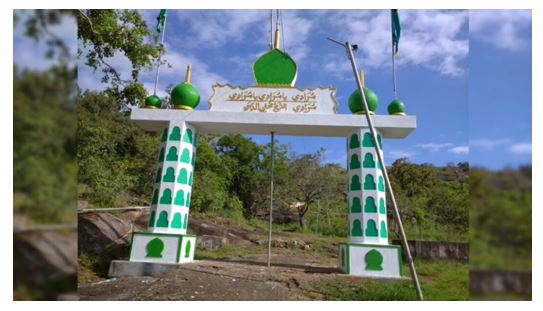 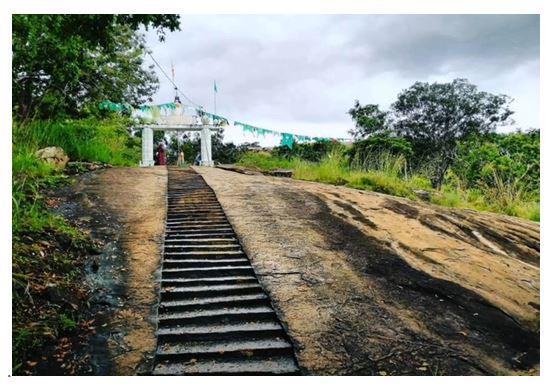 Steps to the minaret. 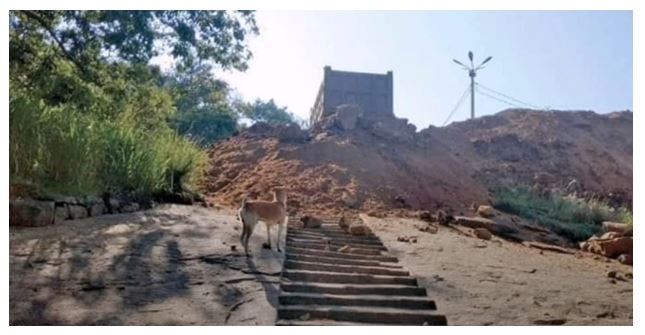 Minaret destroyed and the steps covered with sands 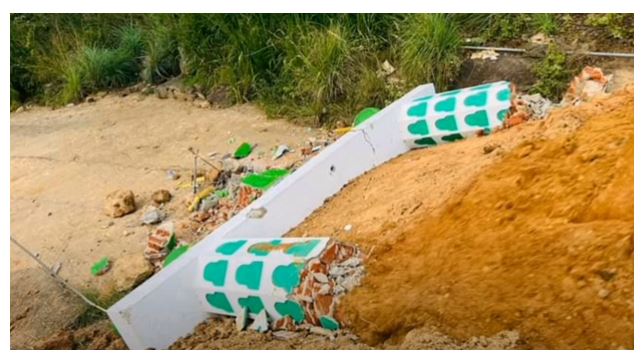 Part of the destroyed minaret.

High handed vandalism insulting Muslims - Views expressed by writers in this section are their own and do not necessarily reflect Latheefarook.com point-of-view