As Abdel Fattah el-Sisi is due to ratify the death penalty for 12 opposition members by the end of June, their loved ones are living in anguish and hoping for clemency The families of two Muslim Brotherhood politicians on death row in Egypt say they are living in fear, as the executions may be carried out imminently if no presidential pardon is issued by the end of June.

“We are in constant fear,” Sanaa Abdelgawad, the wife of former member of parliament Mohamed el-Beltagy, told Middle East Eye.

“After the death penalty has been upheld, the execution can take place at any moment.”

On 14 June, Egypt’s highest appeals court upheld the death sentences issued against Beltagy and 11 other opponents of the government of President Abdel Fattah el-Sisi, paving the way for their potential execution. The country’s criminal procedure code gives the president 14 days following the court ruling to pardon the defendants or commute the death sentences.

‘I never imagined that the victim, my husband, would be sentenced to death, while the killer would be left at large’

Those on death row include a number of outspoken political figures who held leading roles in the 2011 uprising against longtime ruler Hosni Mubarak, as well as in the demonstrations against the 2013 coup that deposed Mohamed Morsi, Egypt’s first democratically elected president.

The Muslim Brotherhood held power for nearly a year under Morsi’s leadership before he was ousted by Sisi.

The court decision marks an end to a mass trial that began in December 2015, in which 739 defendants were charged with being involved in the 2013 Rabaa Square sit-in protest against Morsi’s overthrow.

The crackdown by Egyptian security forces on the sit-in on 14 August 2013 has been described by Human Rights Watch as the “worst single-day killing of protesters in modern history”, with at least 800 people killed.

Morsi, meanwhile, died of a heart attack during a court session in June 2019. UN experts said the conditions in which the Muslim Brotherhood leader had been imprisoned may have directly led to his death, amounting to a “state-sanctioned killing”.

Who are the 12 people at risk of execution in Egypt? 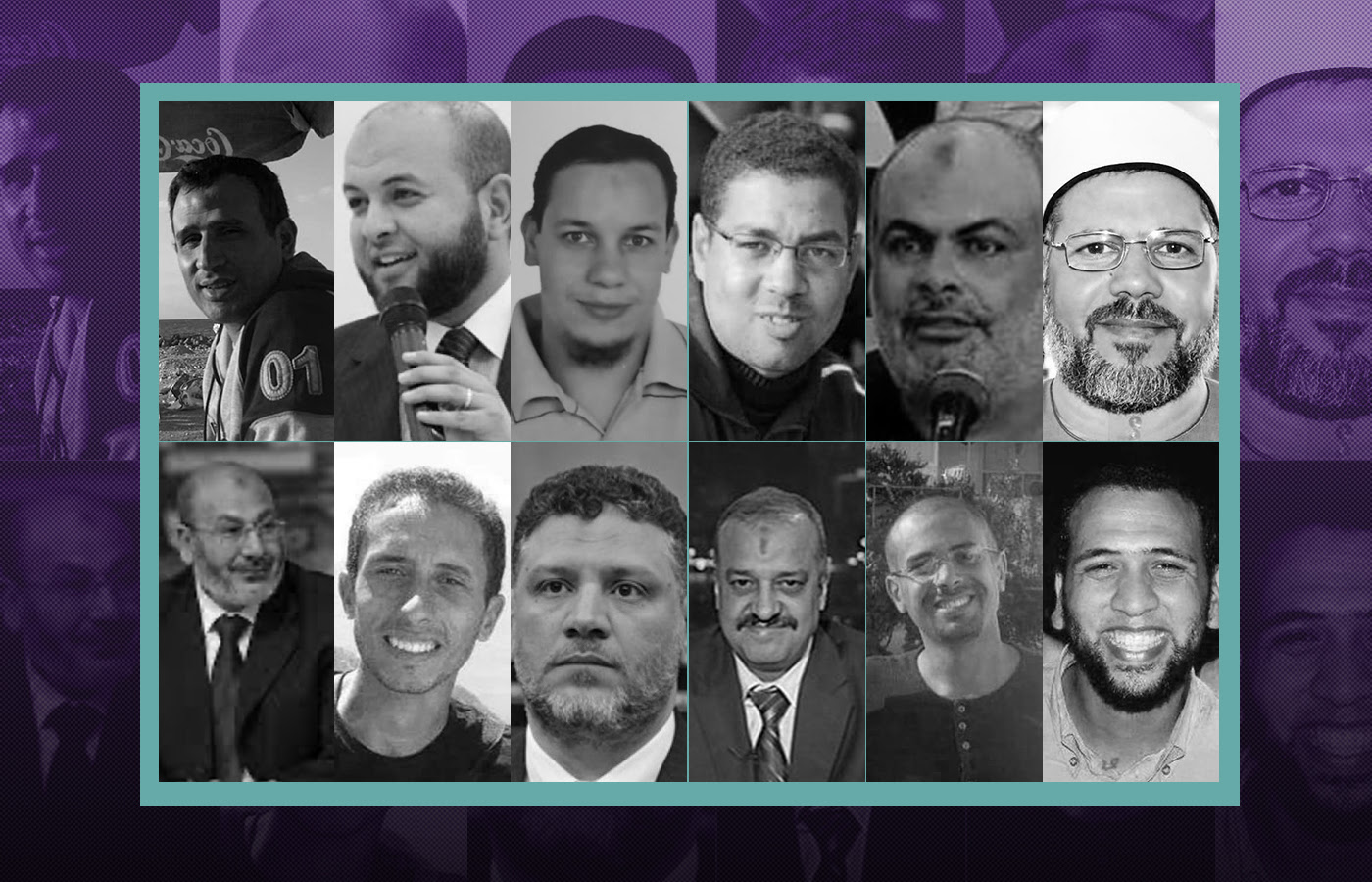 The death sentences have triggered an outcry by international rights groups, which have said the trial has been marred by violations of due process from its outset – all while security forces behind the Rabaa massacre have yet to face accountability.

Human Rights Watch described the sentences as “a mockery of justice”, while Amnesty International said they were “a stain on the reputation of Egypt’s highest appeals court and cast a dark shadow over the country’s entire justice system”.

In 2020, the number of executions in Egypt tripled from the year before, making the country the third-most prolific executioner after China and Iran.

Many of those executed have been described by rights groups as “prisoners of conscience” detained over their opposition to the Sisi government.

According to the Geneva-based Committee for Justice rights group, at least 92 Sisi opponents have been executed since 2013, and final death sentences have been issued for 64 others who may be executed at any moment.

However, if the death penalty against the 12 Brotherhood leaders is carried out, it would be the first time under Sisi’s rule that well-known opposition figures are executed.

While the Brotherhood’s Freedom and Justice Party had the largest popular backing in the 2012 elections, the coup effectively erased the group from Egyptian political life. Since then, the party has been dissolved and the Brotherhood declared a terrorist organisation. Thousands of its members and supporters have been either jailed, killed, or forced to live in exile.

It was only two weeks after the death of her daughter, killed during the Rabaa massacre, that Abdelgawad, 53, heard about her husband’s arrest.

“Life became extremely hard,” she told MEE from Istanbul, where she has been living in exile. “I lost my only daughter, then her father was taken from me by an unjust incarceration. I thought the injustice was only temporary, but I was devastated when my sons were detained, one after another.”

Abdelgawad’s son Anas remains in pre-trial detention for the seventh year in a row. Her other three sons, Ammar, Khaled and Hossam live with her in exile.

She believes her husband’s trial and death sentence amount to prosecuting the victims of the Rabaa massacre, while the culprits have yet to be held accountable.

“I never imagined that the victim, my husband, would be sentenced to death, while the killer would be left at large,” she said. “But under military rule, violations of the law and human rights have become the norm.” 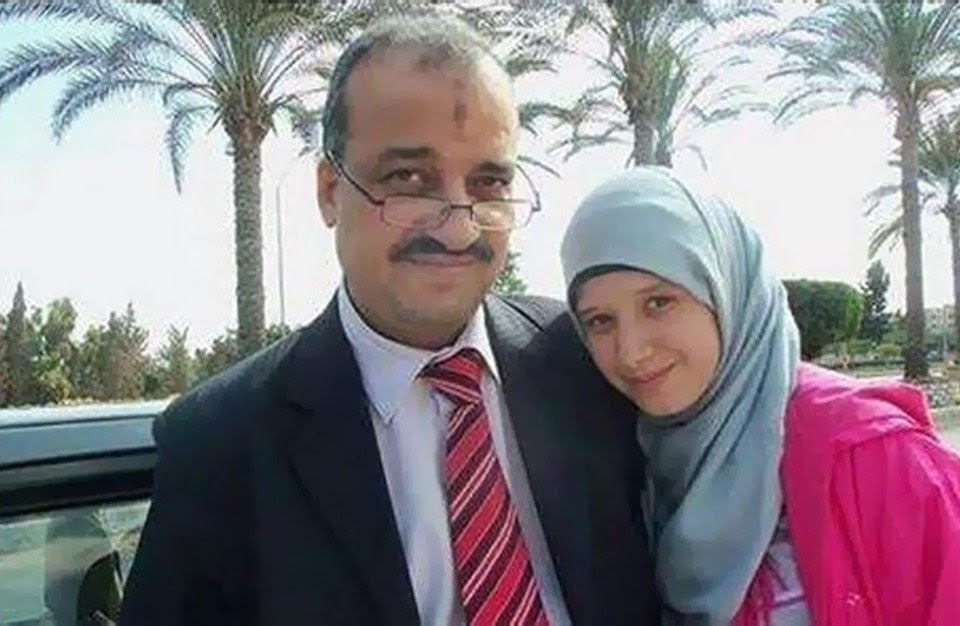 El-Beltagy with his daughter Asmaa, who was killed in Rabaa Square on 14 August 2013 (Supplied)

The last time Abdelgawad saw her husband was five and a half years ago. She says he has been held in solitary confinement since his arrest, barred from family visits for most of his detention, and stripped of access to medication, books, and exercise.

“My husband was a member of parliament and a member of the National Council for Human Rights,” she said. “He used to defend victims of injustice. He was also a professor of ear, nose and throat surgery at Al-Azhar University. He had a medical centre where he provided his services to patients, many of them he treated free of charge.”

In addition to being a member of parliament, Beltagy was thought of as an activist by many. Even though the Brotherhood was accused of not taking part in the early days of the 2011 anti-Mubarak protests, Beltagy was among those who were present from day one. On 25 January 2011, he took part in a protest against police brutality in front of the High Judicial Council in Cairo’s Ramsis street, alongside members of the Kefaya movement.

He was also a pro-Palestine activist, and was among those on board the MV Mavi Marmara during the 2010 Gaza flotilla raid.

Osama Yassin, the former minister of youth, likewise held a central role in the 2011 uprising, when he served as the Brotherhood’s protest coordinator.

Yassin, 56, was detained on 26 August 2013, following the crackdown on the Rabaa sit-in. In his last defence speech before the court in May 2016, he said that he believed the reason for his prosecution was his role in the revolution.

“My offence is taking part in the 25 January revolution as one of its leading figures,” he said. “The objective of these trials is to turn those who had a leading role in the revolution into examples for others, to deter the people from another revolution.

“The victims of Rabaa are the ones standing trial, while the real culprits in spilling blood are at large,” he told the judge in a video that went viral online.

“So much has happened in the eight years of my father’s imprisonment,” he told MEE.

“Every joyous memory lacked something, it lacked his presence. It haunted us everyday that his chair at the dinner table was empty, and every day we had to live through the pain that he is alone in a small dark cell in solitary confinement, yearning to be with us and witness our growth,” he added.

Yassin’s son said his family has not been optimistic about his release.

“We knew he wouldn’t be released, we knew the government has a personal vendetta against our father because of his role in the 25 January [uprising]. He was one of its icons, and they hate him for it,” he said.

“So we knew he wouldn’t be easily released, but we never expected that he would be facing the death penalty. He is innocent, and he has worked all his life to serve the community at every opportunity.” Ahmed described his father as “a very smart paediatrician who saved so many families’ lives by saving their kids. He was genuinely good at heart and selfless, whether at work as a doctor, as a parliamentarian or as a minister.”

Like Beltagy, Yassin said his father has been barred from family visits since 2016. His lawyers have also been prevented from meeting with him.

He added that the circumstances of his father’s detention – who he said has been suffering from medical negligence, isolated in a cell 1.5 metres wide and 2 metres long, and barred from having warm clothes in the winter – amounted to deliberate killing.

“Ever since we heard the news, we have barely been sleeping. We are scared to hear the news of his execution at any moment,” Ahmed said.

“It is hard to be living through my day knowing my father’s death is imminent.”

Disclaimer: Egypt: Families of Muslim Brotherhood figures fear executions 'at any moment' - Views expressed by writers in this section are their own and do not necessarily reflect Latheefarook.com point-of-view