Skip to content
Syria
Spread the love
Rescued Syrian refugees ride in the back of a vehicle on March 21, 2020 [BIROL BEBEK/AFP via Getty Images]

People on the packed boat screamed as the Libyan coastguard rammed them until they feared it would sink. They boarded and swung their truncheons and guns at men, women, and children alike. Mohammed realised he’d been cheated, and the smuggler who had arranged for passage out of Libya to Europe had lied: The coastguards were not going to help, as they dragged the ship back toward war-torn Libya, crowing in victory: “Italy no-no! Libya 100 per cent!” Little did he know, the worst was still to come.

Mohammed fled Syria in search of a better life. Terrified by the prospect of being conscripted into Assad’s army. 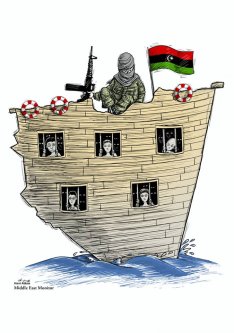 Hearing that the route to Europe via Libya was open, he left immediately, first escaping to Lebanon via Homs, and then onward to Libya. The exploitation of a desperate situation began immediately. “It was clear that the ones in charge of us were gangs; any service for money, brokers everywhere,” he recalls. “People were using our situation to make more money for everything.”

Mohammed paid large amounts of money to have a passport issued, then to be flown from Lebanon to Libya’s Benina airport. Upon arrival, the smuggled group was treated like animals. “They lined us up and sprayed antibacterial liquid on us. They treated us awfully, like animals. They forced us to sit on the ground for three hours, even those who wanted to go to the toilets,” Mohammed says. “They forced us to go to the walls with sticks in their hands and said, do your toilet here on the walls.”

For another $500, Mohammed was taken to Tripoli from Benghazi. Upon arrival, he was introduced to a smuggler named Walid and stayed in prison-like accommodation. After 20 days, Walid decided it was time to begin the perilous journey across the Mediterranean to Europe. “We each paid $1,500 to him, and he fooled us and said he organised everything with the coastguards, and that if any risk or danger occurs to us while on the boat he will take us back off the boat,” Mohammed explains.

They waited on a beach, shivering at 1 am, waiting to leave; any second thoughts were swiftly shot down by Walid. “They forced us in the boat while beating us. He promised that our boat would reach the regional waters and enter Italian waters. We didn’t know the details or where we were heading,” Mohammed recalls. They were optimistic that they would reach their destination but soon realised their positivity was horribly misguided.

“We were shivering from fear,” Mohammed says. “We felt so scared when they arrested us in the sea, it was the worst feeling I’ve ever felt in my life. They were frightening us on purpose. They also stopped about four or five other boats and arrested them as well.”

“One of the boats was of Africans; one of the Africans jumped into the sea to kill himself. We tried to help him and search for him, but we couldn’t find him nor help him.”

“The boat started the journey and then the coastguards cut our way, we thought they would help us as Walid promised us, but they started threatening us and pushed our boat to the point it was about to sink,” Mohammed says.

As they dragged the boat back to Libya’s Zawiya, he had no idea the worst was yet to come. “At the port of Zawiya, the port officers said ‘give us the money you have, and we won’t take you to prison’, they promised that the ones who pay would go to the bathroom and then they will drive them to the city centre,” he says. But the port guards weren’t true to their word. They drove the penniless group to prison. “At the prison, they used the intimidation policy, they stripped us and hit us, we were so scared, they left us with 300 African prisoners.”

The group didn’t eat for days, and they were deprived of food as ‘punishment’. “We stayed hungry. They put us on the walls in lines. We thought they would execute us.” The conditions were squalid. The prison toilets had no water, and were overflowing with human waste, the smell unbearable, he explains. The prison cells were bare, with no beds or basic amenities.

After around four days of no proper food, the guards finally fed the exhausted prisoners at around 3 am, pouring water on those who could barely keep their eyes open to wake them up. The food came at a further price. As Mohammed and the others ate, the guards beat them. “If we reacted from the pain, they would hit again. They were handing food and kicking it with their legs, he hit me with a metal pipe on my back, I was silent so as not to be hit again.”

Collective punishment was common. If the guards deemed one migrant as having misbehaved, then everyone would be punished. “Sometimes if someone caused a problem, we would all be banned from food for one day, which was one meal per day,” he says. “They were punishing all for one person. We Syrians didn’t cause any problems, and we never tried to escape,” Mohammed recalls. “Algerians and Africans tried to escape, they punished us all and locked us in a room, 400 people locked standing on their feet, and we were about to suffocate from the lack of air,” he continues. “All we thought about while locked in prison is just to be free to drink good water, to save ourselves. We are all lost. Our biggest dream in prison was a loaf of bread.”

The guards goaded the Syrian detainees, saying that no one would care if they died here or in Syria, and told them that they shouldn’t feel important. Refugees who tried to escape would be shot and have their bleeding bodies dragged back to the detention centre to be laid out as a lesson to anyone who dared try to make a run for it.

The sick were ignored, as there were no hospitals or doctors available.

After long negotiations, Mohammed finally managed to secure his freedom at a cost of $1,000. The transaction was essentially a ransom. “They called our families and told them, ‘your son is in this terrible situation; if you want to save him, send this money,’ and the families are worried about their loved ones, so they transferred the money.”

“I was worried he would continue to exploit my family and ask them more than once; I told them on the phone to delete his number and never ever answer his phone call after they send the payment.”

According to Amnesty International, in two months alone in 2018, 2,600 refugees attempting to make the crossing to Europe were taken and transferred to squalid conditions where they faced torture and extortion.

People smugglers can charge around $3,000 per boat trip, and more if women and children are involved. According to a report by Middle East Monitor in 2017, it is possible for a smuggler to make around $1 million in one trip.

Mohammed is now stuck in Libya. He doesn’t know where to go, or what to do.

We were never treated as humans since we started our journey. We are at a point where we can’t go back, and we can’t go forward; what should we do? I have no idea.

“For me, I would prefer to go back to Syria than stay here. Even the Assad regime prisons are less brutal than what we saw here.”

In 2019, Human Rights Watch confirmed these allegations. It heavily criticised the European Union’s efforts to prevent boats from being launched from Libya and paying for Libyan coastguards to intercept boats of refugees heading to Europe.

The Libyan consulate did not respond with comment when approached by MEMO, but officials have previously said proven torture or extortion allegations were “an act of an individual and not a systematic practice.”

Disclaimer: Syrian refugee: We were never treated as humans - Views expressed by writers in this section are their own and do not necessarily reflect Latheefarook.com point-of-view